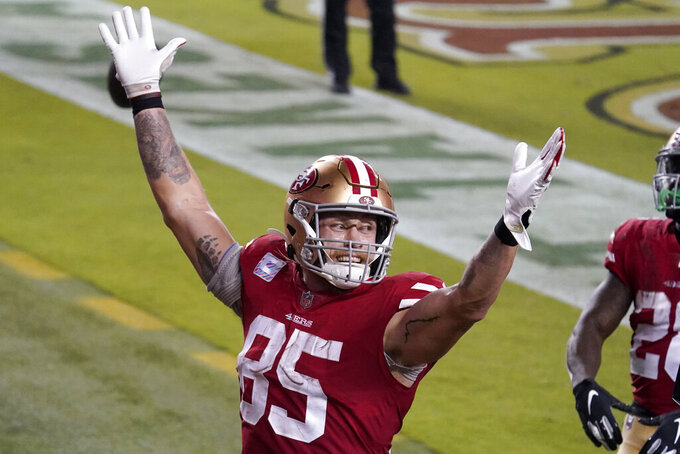 SANTA CLARA, Calif. (AP) — Miami coach Brian Flores knew early on that Jimmy Garoppolo had what it took to be an NFL starting quarterback.

As a defensive assistant in New England when Garoppolo was drafted in 2014, Flores got a first-hand look at what Garoppolo could do.

“He was very talented,” Flores said. “He would make throws and make you turn back and say, ‘Wow, that was a good one.’ I think he played early a little bit (in 2016). I remember us going out to Arizona and he played well in that game and he played well the next week. I think just watching the preseason games and practice, I think we all knew he was going to be a good player and it’s definitely turned out that way.”

Flores will likely get to see that on Sunday when the Dolphins (1-3) visit Garoppolo and the San Francisco 49ers (2-2).

Garoppolo is expected back this week after missing the past two games with a sprained ankle. His return should provide a spark for a San Francisco team that struggled last week in a 25-20 home loss to Philadelphia thanks in large part to three costly turnovers by backup Nick Mullens.

Since coach Kyle Shanahan took over in San Francisco, the Niners are 20-6 when Garoppolo starts, compared to a 5-21 mark with any other quarterback.

No matter who plays at quarterback the key for the 49ers will be getting the running game back in gear after it struggled a bit the past couple of weeks.

“I think that when we’re playing at our best, we’re the best run game team in football,” tight end George Kittle said. “We have not lived up to my standards or our team’s standards.”

The Niners got a big boost last week on offense with the return of Kittle, who had missed the previous two games with a sprained knee. Kittle was targeted 15 times, catching all 15 for 183 yards and a touchdown. Kittle was the fourth wide receiver or tight end since 2009 to be targeted at least 12 times and catch every pass.

“I don’t think you stop him. I think you just try to limit him,” Flores said. “I think you try to give him different looks -- play zone, play some man. I think when you’ve got a player like this, you’ve got to think about doubling a guy like this; but again, he’s as physical as they get.”

Miami quarterback Ryan Fitzpatrick will again start despite a crescendo in the clamor for top draft pick Tua Tagovailoa to make his NFL debut. Flores said he’s not going to be pressured by the media into switching to Tagovailoa. Fitzpatrick said he’s not looking over his shoulder.

“I just go out and try to play the best that I can in each game, and that’s where I put my focus,” Fitzpatrick said. “If you start thinking about that stuff and allowing that to affect the way you’re playing — whether you want to be more risky or more careful -- that’s just not really who I am.”

Fitzpatrick has thrown five interceptions, tied for third most in the NFL. His passer rating ranks 28th, and his career record as a starter is 56-86-1.

The Niners struggled on the offensive line last week, allowing 16 pressures, according to SportRadar. The usually reliable tackles Trent Williams and Mike McGlinchey had problems and the interior of the line was once again overmatched at times.

“I think just as a whole, we need to be crisper,” coach Kyle Shanahan said. “Need to be more on it.”

Dolphins coaches have come and gone since Don Shula retired, and Flores is off to the worst start of any of them since Cam Cameron in 2007.

Cameron went 1-15 and was fired after one season.

The Niners' passing game under Shanahan has been built on getting the ball to playmakers, who then are able to create big plays after the catch. Kittle has been one of the best in the game at it with the most yards after the catch among all tight ends and receivers since he entered the league in 2017. Deebo Samuel ranked second among all receivers last season in yards after catch per reception. Now rookie Brandon Aiyuk is showing off those same skills, scoring TDs on 38- and 31-yard runs the past two weeks.

“I think Brandon is doing a great job,” Samuel said. “It’s good to say that he’s part of the YAC Bros now. ... It’s just great to have another guy out there who can break tackles and go score.”