The end of the tunnel for Giants: '21 season finally ending 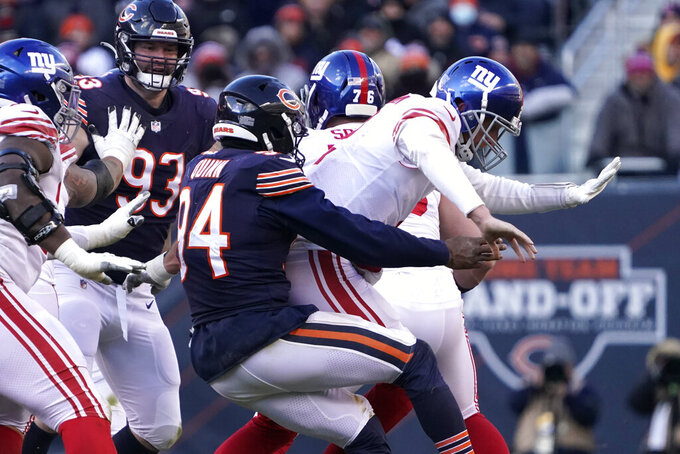 A campaign that started with the hope second-year coach Joe Judge and his team would build off a six-win first season and get back to the playoffs for the first time since 2016 has turned into a massive disappointment.

The Giants are 4-12 after Sunday's embarrassing 29-3 loss to the Bears in Chicago. They have five straight, double-digits losses by a combined 141-49. The three points were the fewest New York has scored in a game since Judge took over. It marked the third time in five games the offense failed to score a touchdown in a game with quarterback Daniel Jones sidelined with a neck injury.

Not only did the Giants lose but Judge disclosed Monday quarterback Mike Glennon hurt his left wrist and will require surgery. He will miss the final game.

All that is left is for the Giants is to play Washington on Sunday. It's an appropriate opponent. The teams met on a Thursday night in Week 2 and the Giants lost the game 30-29 on a field goal by Dustin Hopkins on the final play. He actually missed the kick the first time but got a second chance because Dexter Lawrence went offside.

That's how things went this season. There were mistakes on and off the field (free agency), a multitude of injuries, especially on the offensive line, and players having bad seasons.

There were many steps backward instead of forward, and there will be consequences.

Hired in December 2017 to turn around the struggling franchise, general manager Dave Gettleman probably will be gone after a fourth straight, double-digit losing season.

The way the team has finished, one has to wonder whether co-owners John Mara and Steve Tisch are having major concerns about Judge's future. If he was fired, it would be the third straight coach they sent packing after two seasons, joining Ben McAdoo and Pat Shurmur.

Judge insisted after Sunday's game that he has a hard-working, professional team that is on track to turn things around. While that's fine to say, watching this team — which lost its sixth straight on the road — causes eyesores.

The same thing that has worked most of the season: the defense. The Bears scored 29 points, 19 courtesy of the offense and special teams. The first 14 followed turnovers and the TD drives covered 2 and 24 yards. When returner Pharoh Cooper botched a kickoff late in the first half, it led to a safety and field goal in the final :52. Giving up 10 points in the NFL is a good game for any defense.

The offense has been pathetic since Jones was sidelined. The performances by Mike Glennon and Jake Fromm as the backup quarterbacks have left a lot to be desired. Fromm is expected to start Sunday with Brian Lewerke coming off the practice squad to back him up. The recycled O-line has not helped, but Jones certainly got some things done when he played. The offense had a season-low 151 yards Sunday and was 1 of 11 on third downs. Kenny Golladay, who signed a $72 million contract, was targeted once on the team's 11 pass attempts, and that was intercepted.

Saquon Barkley had his best game since tearing the ACL and MCL in his right knee on Sept. 20, 2020. That's was the last time the Giants were in Chicago. He carried 21 times for a season-high 102 yards. Of interest: In the run-heavy offense, he ran several times out of a wildcat formation. It might be something to consider in the future.

Glennon. The veteran quarterback had a miserable game. He was sacked and lost a fumble on the first play from scrimmage and threw an interception on the second series. It staked the Bears to a 14-0 lead. He ended up losing two fumbles and throwing two interceptions. He was 4 of 11 for 24 yards and had a quarterback rating of 5.3. And he got hurt in the process.

Glennon injured his left wrist in the game and soon will need surgery on his non-throwing hand, Judge said. The Giants hope to get WR Darius Slayton and DTs Lawrence and Danny Shelton back from the COVID-19 list. The status of WRs Kadarius Toney (shoulder) and John Ross (knee/COVID-19 ramp up) will be determined this week.

4 — The number of passes the Giants completed against the Bears. The four completions were the Giants’ lowest total since Oct. 22, 1978, when Joe Pisarcik hit 3 of 10 throws in a 17-6 victory against Washington.

The Giants wrap up the season at home against Washington. The next move or moves will come from management.