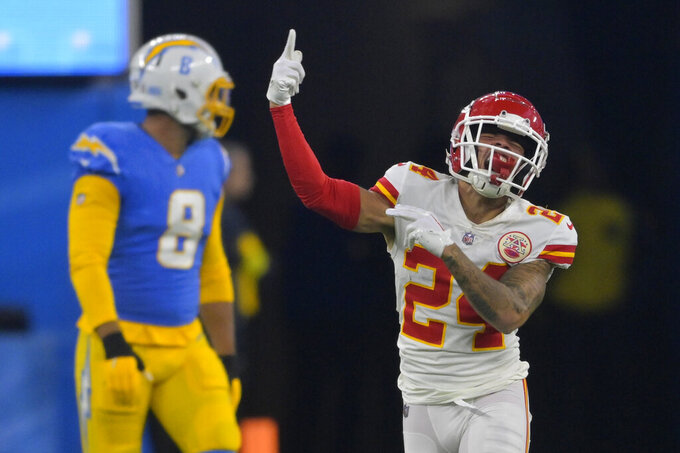 Kansas City Chiefs wide receiver Skyy Moore, right, celebrates after making a catch for a first down as Los Angeles Chargers linebacker Kyle Van Noy stands in the background during the second half of an NFL football game Sunday, Nov. 20, 2022, in Inglewood, Calif. (AP Photo/Jayne Kamin-Oncea)

INGLEWOOD, Calif. (AP) — Los Angeles Chargers safety Derwin James has had the better of his matchups against Kansas City's Travis Kelce over the years. The one time he didn't, though, ended up being the most painful.

James allowed his first touchdown to Kelce at the worst possible time Sunday night. Kelce's 17-yard TD reception came with 31 seconds remaining as the Chiefs rallied for a 30-27 victory over their AFC West rivals.

“It was a man-to-pick route. They ran a good play. Executed it," James said. "He ran a drag route and was running away from my leverage. When I did try to catch up the dude got in my way. I got to make that play. That is what they pay me to do.

“That one hurts. That is a tough one especially against that team.”

Coming into the game, James had covered Kelce on 36 snaps over their six matchups since 2018 according to Next Gen Stats. Kelce had been targeted seven times and had only four receptions for 14 yards.

Against the rest of the Chargers’ defenders over the same period, Kelce had 45 receptions for 605 yards and four touchdowns.

“He’s one of the best in the league He got the better of me the majority of the game,” Kelce said about James. “I knew he was sitting on my outside shoulder. Coach Reid saw that, he had me get across the field and beat him.”

It was the third straight year the Chargers had a late lead against the Chiefs at home, only to come up empty.

Last year, Kelce had a pair of touchdowns — late in regulation and then in overtime — for a 34-28 victory.

“They made a few plays. We contested the whole series," coach Brandon Staley said. "We just didn’t rush or cover well enough to finish it.”

The Chargers have not won a home game against the Chiefs since 2013.

The one thing the Chargers can take out of the game is that their offense looked better with the return of receivers Keenan Allen and Mike Williams, who had been out the last two games.

Allen, playing only his third game due to a nagging hamstring injury, had five receptions for 94 yards. That included a 46-yard catch in the fourth quarter to put the ball on the Chiefs 16-yard line. Four plays later, Justin Herbert connected with Joshua Palmer on a 6-yard touchdown to give the Chargers what proved to be a short-lived 27-23 lead.

Williams' return was short lived. He had one catch for 15 yards and departed after reinjuring his right ankle in the first quarter.

“It’s part of the NFL. Injuries are common in the NFL and you have to battle through them. It’s adversity that you have to deal with," said Herbert, who went 23 of 30 for 280 yards and two touchdowns.

Even though the Chargers are 5-5, only two of their remaining seven games are against teams with a winning record.

“We have to stay connected. We have to put this one behind us, learn from it. Get some guys rested and get some guys back, which is going to happen," Staley said. "We’re 10 games into the season. We’re 5-5. Everything is in front of us. We have to make improvements and it starts this week with Arizona.”