Jets' Darnold working to put dismal season debut behind him 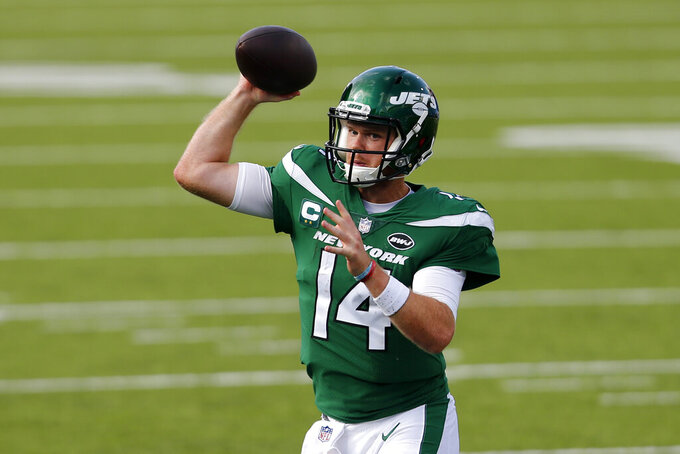 It was an ugly opening game for the New York Jets quarterback, and a performance that was alarmingly unexpected.

“For me, it’s little things,” Darnold said. “It’s taking a deep breath, playing a little slower, quieting my feet down. And then again, the little details that we can clean up in the run game and the pass game. And again, like I've said, they’re fixable.”

The thing is, the Jets need their quarterback to not only correct those things but not make those same mistakes.

The 23-year-old Darnold is still considered by many in the organization the franchise-type quarterback the Jets believed he'd be when they took him third overall in the 2018 draft. And that includes Jets CEO Christopher Johnson, who spoke glowingly of Darnold this week.

“I have every confidence in Sam, I really do,” Johnson said. “I think we’re going to see him turn into that quarterback that we all expected shortly. I really do. I think he’s an absolutely sterling quarterback.”

But Darnold can't have many more games like he did Sunday at Buffalo. Not in Year 3. Otherwise, New York will continue to lose and the prospect of Clemson quarterback Trevor Lawrence being there at No. 1 next April could become a difficult — and franchise-altering — decision the Jets will have to make.

Stick with Darnold? Or, already time to move on?

Granted, it's one game into the season. But it's troubling that some doubts have already crept in. To his credit, Darnold shouldered the blame for the 27-17 loss after the game and the next few days after it. He has the qualities of a team leader, beyond the captain's “C” on his jersey. Darnold simply needs to be better — and consistently good — to dispel any of the uncertainty about his future with the franchise.

Johnson called Darnold “the absolute best” player he has seen at turning the page and moving on. And that's exactly what the young QB is doing this week while preparing to face San Francisco.

“For me, it’s always just been a one-week-at-a-time mentality,” Darnold said. "And then obviously learn from the game on Monday and then Tuesday, even Monday night, start watching tape of the Niners, get ready for a great Tuesday, start getting ready again, continue to watch tape of the Niners and then have a great couple of practices Wednesday, Thursday and Friday.

“I think once you start working on another team, it’s easier to move on.”

Darnold was 21 of 35 for 215 yards with a touchdown and an interception at Buffalo, but those numbers were largely padded by a strong final drive.

“Sam's been fine,” offensive coordinator and quarterback coach Dowell Loggains said. “He was looking forward after the tough game offensively to getting back in the film room and making sure we corrected all the things we needed to correct. We talked about the things we did well, the things we didn't do well, the lack of execution, how we can coach him better and make sure we put him in the right situations.”

That's on Loggains and particularly coach Adam Gase, who is expected to help Darnold improve this season.

Gase talked about trying to get Darnold into more of an early rhythm. But that might be a little more difficult this week against the 49ers. Not only are running back Le'Veon Bell and wide receiver Denzel Mims on injured reserve, but leading receiver Jamison Crowder's availability is uncertain after he sat out practice Thursday with a hamstring injury.

“For me, it’s just about doing my job every play,” Darnold said. “Really, whoever is out there, you’ve just got to get the ball to them, make sure that they need to be in the right spot at the right time."

But with so many playmakers out, the perception by many is that Darnold simply doesn't have enough to work with to succeed. Or at least to be competitive.

“That’s not true at all,” Darnold insisted. “We have really good playmakers. Again, it’s about me getting the ball in their hands and making sure that they can run after the catch.”

Darnold knows he needs to lead the way.

“Really good couple days of practice here to get ready for the Niners,” Darnold said. “It's obviously, a good test for us. We’re ready to roll.”