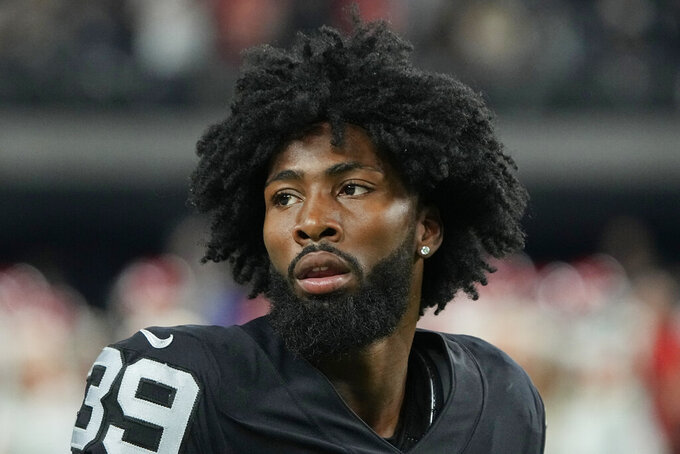 LAS VEGAS (AP) — Las Vegas Raiders cornerback Nate Hobbs pleaded guilty Wednesday to a reduced traffic charge stemming from his arrest early this month on suspicion of driving under the influence of alcohol.

The 22-year-old rookie did not appear in person while his attorney, Richard Schonfeld, submitted a written guilty plea to a misdemeanor — careless driving.

Hobbs was arrested before dawn Jan. 3 after he was found asleep inside a vehicle stopped on an exit ramp of a Las Vegas Strip casino parking garage.

Prosecutors said Hobbs’ blood-alcohol level was tested at 0.07%, just under the DUI legal limit in Nevada of 0.08%.

A Las Vegas justice of the peace accepted the plea, imposed a $685 fine and 20 hours of community service, and ordered Hobbs to stay out of trouble.

Schonfeld noted that the court order was “going forward.”

That's important because Hobbs faces a separate reckless driving charge after he was ticketed on Jan. 16 on a Las Vegas-area freeway. A Nevada Highway Patrol trooper said Hobbs was clocked speeding at 110 mph (177 kph) in a 65 mph (105 kph) zone.

The trooper reported following Hobbs’ black Mercedes-Benz after it sped past a patrol vehicle and made several unsafe lane changes passing other vehicles.

Schonfeld has acknowledged Hobbs received the ticket and said he will respond to the charge in court. Hobbs is due to face a judge April 18.

Clark County District Attorney Steve Wolfson released a statement Wednesday noting that Hobbs was not legally under the influence when he was arrested Jan. 3, but saying that Hobbs will submit to an alcohol treatment program provided by the National Football League and the NFL Players Association.

Hobbs could face up to 30 days in jail if he violates terms of the plea, Wolfson said.

The Raiders did not immediately respond to messages about Hobbs. He played Jan. 15 in the team's last game of the season — a wild-card round playoff loss at the Cincinnati Bengals.

Hobbs’ driving cases came shortly after Raiders receiver Henry Ruggs III was involved in a high-speed crash that killed a 23-year-old Las Vegas woman while Ruggs was allegedly driving drunk. Authorities said Ruggs and his girlfriend were injured in the crash.

The Raiders released Ruggs hours after the wreck.

The former first-round NFL draft pick is accused of driving 156 mph (251 kph) in a residential area with a blood-alcohol level of 0.16%, twice the legal limit, before his Chevrolet Corvette slammed into the back of the woman’s vehicle.

A year ago, a DUI charge was dropped against another Raiders player, running back Josh Jacobs, stemming from a vehicle crash in a Las Vegas airport traffic tunnel.

Jacobs, then 22, received several stitches for a cut forehead after the crash, but his lawyers said his blood-alcohol level did not reach 0.08%. He paid a $500 fine on a failure to exercise due care traffic violation. His attorneys were Schonfeld and David Chesnoff.