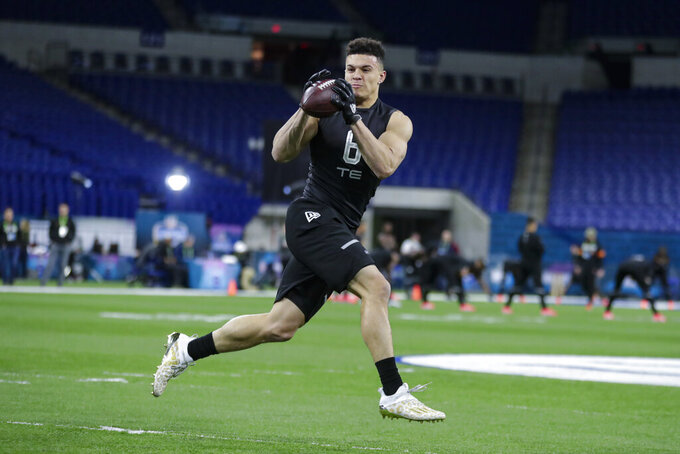 LOS ANGELES (AP) — If Clay Johnston's performance on the field is even close to his performance over the phone, the Los Angeles Rams just got a game changer in the seventh round of the NFL draft.

Johnston didn't even try to contain his euphoria after the Rams drafted the Baylor linebacker Saturday, whooping and hollering in excitement with an enthusiasm that even stunned famously fired-up coach Sean McVay.

“I have never experienced a call like that in my life,” McVay said with a grin. "I was starting to fade in the seventh round, and this guy gave me a shot of adrenaline. I was about ready to put my head in a wall.”

After letting loose with McVay and general manager Les Snead, Johnston hadn't cooled off a bit when he spoke to the media on a video call.

Johnston struggled to remember the details of his call with the Rams' front office, admitting: “I've still got to get the names down.”

“When I got a call and they said, ‘Do you want to be a Ram?’ I said, ‘By God, I want to be a Ram, let’s freakin' go,'” Johnston said. "I screamed, and everyone was screaming, going nuts in here. Instantly put some pads on, ran through our front door, broke the windshield, it was awesome.”

Johnston was only joking about the windshield, but the son of longtime NFL strength coach Kent Johnston gave an enormous boost to the final day of a draft in which the Rams addressed several needs on their depleted roster.

The Rams made a surprising choice with their highest pick of the final day, grabbing Purdue tight end Brycen Hopkins in the fourth round.

The Rams already have three tight ends who have played extensively in an offense that hasn't always used a tight end as a major target. Tyler Higbee had a spectacular second half of the season as a pass catcher last fall, while Gerald Everett remains a favorite target of Jared Goff, even if his numbers haven’t lived up to his second-round expectations.

McVay clearly has big plans for tight ends in the fall after having so much success with Higbee last season, and Hopkins' size and ability were too enticing to pass up. The Rams are also thinking beyond the end of the upcoming season, when Everett's rookie contract will be up.

“We really like our tight end room right now, but we had him highly rated,” Snead said of Hopkins. “We felt like he could come in and carve out a role early, but also later. We didn't have to make that pick, but sometimes when you make those types of picks, there's an element of drafting in a microscope, but also with a telescope.”

The Rams grabbed Miami of Ohio kicker Sam Sloman in the seventh round, adding a third name to the competition to replace longtime incumbent Greg Zuerlein.

The 5-foot-8, 205-pound Sloman excelled at McVay's alma mater, and he was grateful to land with a team that will have a real competition for the job.

“It just meant the world,” Sloman said. “I’m excited for the opportunity to come in and compete for a wide-open job.”

The Rams didn’t draft an offensive lineman until the back of the seventh round, choosing Clemson guard Tremayne Anchrum. While Anchrum has a shot to contribute, Los Angeles is confident in roughly eight linemen already in the building, even after last year’s injury-plagued struggles.

“We’ve been adding young players for two or three years” on the line, Snead said. “Fortunately or unfortunately, a lot of them got to play last year. They came and performed well, and then the guys they replaced are getting healthier. We felt confident that if we continue grooming and developing these young players, they’ll have a chance to become a very solid offensive line.”

Los Angeles selected Ohio State safety Jordan Fuller in the sixth round after being surprised to see the former Buckeyes captain still available. Fuller, who led the Buckeyes in tackles last year, has connections to the Los Angeles area through his uncle, comedian Sinbad, who lives in Chatsworth. His brother, Devin Fuller, starred at UCLA.

Fuller is up for any role with the Rams, even on special teams.

“What I’ve been asked to do is play more in the back end, but I do enjoy being a run stopper as well,” he said. “I consider myself very versatile, so really plug me in anywhere and I’ll get the job done.”