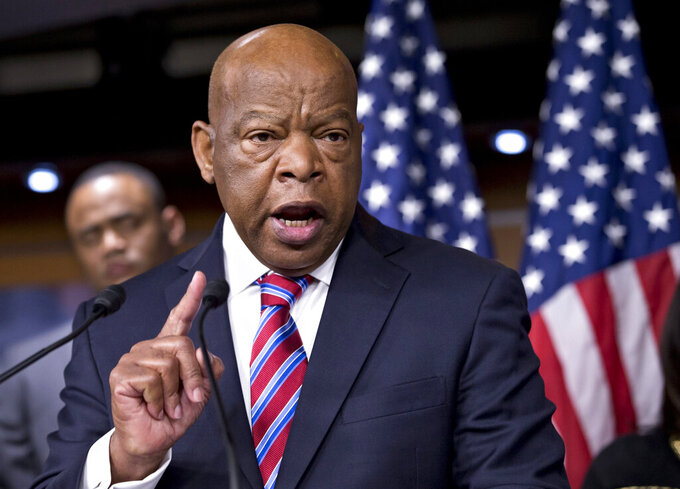 FILE - In this June 25, 2013 file photo, Rep. John Lewis, D-Ga., accompanied by fellow members of the Congressional Black Caucus express disappointment in the Supreme Court's decision on Shelby County v. Holder that invalidates Section 4 of the Voting Rights Act, on Capitol Hill in Washington. Congressman Lewis has studied the NFL’s response to Colin Kaepernick and believes the league could’ve have taken a better approach than to blackball the ex-quarterback. (AP Photo/J. Scott Applewhite, File)

ATLANTA (AP) — U.S. Rep. John Lewis believes sometimes people have to kneel before they can be heard so he supports NFL players who want to peacefully demonstrate against police brutality and social injustice.

"There's nothing wrong with kneeling," Lewis said Friday during a visit to his congressional district, which is hosting Super Bowl 53. "Before we marched from Selma to Montgomery, on March 7, 1965, we knelt. We prayed. Andy Young was the only person standing out of the 600 of us. We knelt, and when we said, 'Amen,' we stood and we started walking.

"Sometimes you have to use the most simple means of engaging in peaceful, nonviolent protest."

Former NFL quarterback Colin Kaepernick helped start a wave of demonstrations by kneeling during the national anthem to raise awareness to police brutality, racial inequality and other social issues.

Entertainers for the Super Bowl halftime show have been getting criticized for aligning with the NFL. Maroon 5, the featured halftime show, canceled its news conference earlier this week to discuss the band's performance. The NFL said "the artists will let their show do the talking as they prepare to take the stage this Sunday."

Lewis has a history of speaking out and the 78-year-old knows firsthand about police brutality.

He was repeatedly beaten and jailed for protesting civil rights issues in the 1960s and had his skull fractured by Alabama state troopers.

Lewis, who represents the U.S. congressional district that's hosting the Super Bowl, has closely watched the national anthem dispute since Kaepernick, a former quarterback with the San Francisco 49ers, knelt two seasons ago during "The Star-Spangled Banner" to protest the murders of blacks in police custody.

"I don't see anything wrong with people engaging in peaceful, nonviolent protest, being able to kneel," Lewis said. "I was looking at a photograph just a few days ago. In 1962, when I was 22 years old, I visited a little town called Cairo, Illinois where the Ohio River and the Mississippi River come together.

"There was a recreation center, sponsored by the city, but young black people could not use it, and we had a kneel-in."

NFL owners tried last summer to implement a policy requiring players to stand for the national anthem if they're on the field before the game, but they backed down after the league's players association objected. Current league policy states that players "are expected to stand during the presentation of the flag and performance of the national anthem. Personnel who do not wish to do so can choose to remain in the locker room."

Kaepernick was in the prime of his career when he opted out of his contract in hopes of getting a better, long-term deal with another team. He has been unable to find a job in the NFL since.

Lewis is pleased that the Super Bowl has returned to Atlanta, the city that he considers the birthplace of American civil rights. He spent Friday morning touring different sites around town where 22 large murals now stand, some with his likeness.

As he looked at a massive "Helping Hands" mural outside Woodruff Library at the Atlanta University Center, Lewis thanked artist Muhammad Yungai and said he hopes younger generations will be inspired to keep the civil rights movement alive.

"I came here when I was 23 years old, in 1963, as head of the Student Nonviolent Coordinating Committee, and I've seen unbelievable changes," he said. "People are moving to this city from all over the world. This city has been very good to America and been good to me."