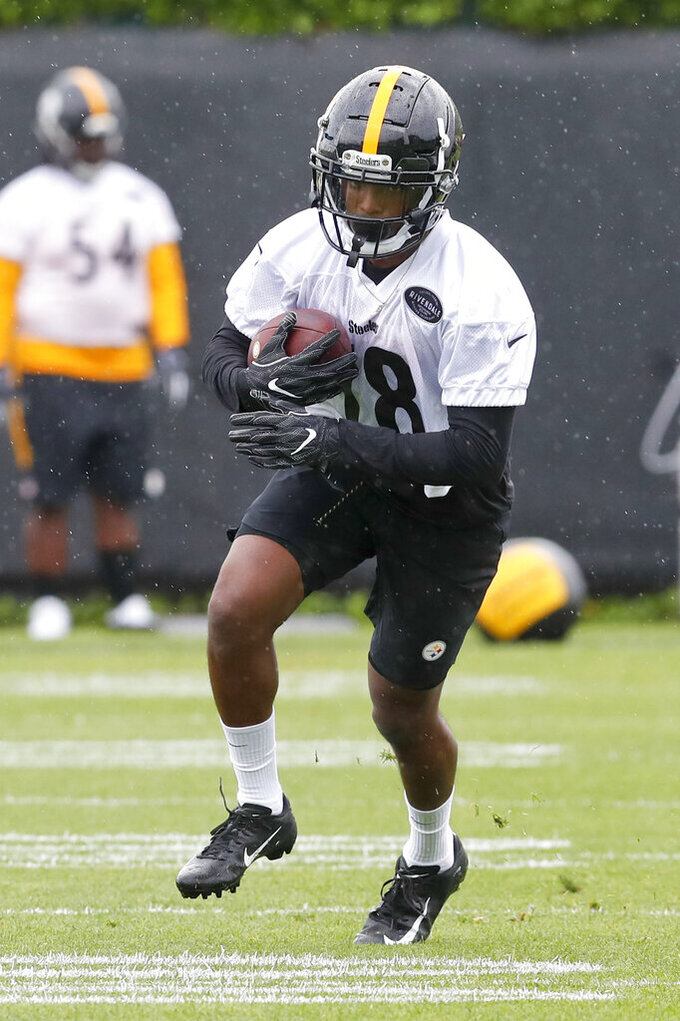 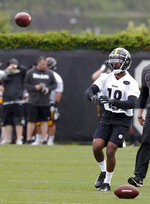 PITTSBURGH (AP) — Pittsburgh Steelers rookie wide receiver Diontae Johnson understands parallels will be drawn between himself and former Steelers star Antonio Brown. The third-round pick, however, is focused on forging his own path.

The comparisons and serendipitous circumstances that link the two are almost too conspicuous to believe. But this "D.J." isn't actively going out of his way to be the next "AB."

As he walked off the field after completing his first official on-field NFL practice session, Johnson was predictably asked to give his thoughts about the ubiquitous comparisons between him and the perennial All-Pro receiver now with Oakland.

"But I can only be myself only."

What the Steelers have been saying they expect of Johnson would be more than good enough — even if it falls short of the level Brown attained as the Steelers' No. 1 receiver for most of the past decade.

Brown was shipped off to the Raiders for third- and fifth-round draft picks in March after he'd publicly clashed with everyone from quarterback Ben Roethlisberger to coach Mike Tomlin to Steelers President Art Rooney II since sitting out the final game of the 2018 season. That leaves a gaping, 114-catch-per-year hole of production on the offense. Brown had 686 receptions, 9,145 yards and 67 touchdowns from 2013 to 2018.

By no means do the Steelers expect Johnson to make up for that by himself. But Johnson enters the NFL with a similar game and profile as Brown — and he was acquired as the headlining (if underwhelming) return in the trade of Brown.

Johnson embraces the on-field similarities with Brown in regards to playing style: "route running, able to catch ball, get out of my breaks, able to run every route in the route tree." But Johnson politely downplays expectations he can approach the superstar status Brown reached in Pittsburgh.

"I'm just trying to come in and contribute and come in and do what I can do," Johnson said. "Be myself and help out in any way that I can."

It might forever be difficult for Johnson to simply "be himself" with the Steelers, if only because many might always compare him to Brown. A look at the roster shows that about the only way Johnson doesn't share a strong resemblance with Brown is uniform number. Johnson was wearing No. 18 at rookie minicamp; Brown's former No. 84 was given to undrafted tight end Milan Richard.

Each had great success as a punt and kick returner, too.

Johnson might not be Brown but he's already made an impression on his new teammates.

"He has a lot of talent," said cornerback Justin Layne, a player the Steelers took with another third-round pick. "Fast, quick guy. He is going to help us a lot."

Steelers fourth-round pick Benny Snell has gotten to know Johnson in recent months because they share the same agent and were roommates in Indianapolis at the combine in February.

"Diontae is amazing," said Snell, a running back from Kentucky. "He's a cool guy, a cool dude — and he's got some hands."

Johnson's hands weren't as much on display Friday as the Steelers likely hoped; he sat out portions of team drills, then deferred to coach Mike Tomlin, who was unavailable to media Friday, for specifics about any injury. But he allowed that he was "fine."

Where Johnson falls into that pecking order in 2019 is a long way from being determined.

"It's exciting, being able to play football again," Johnson said, "being able to run routes and catch balls and learn the plays."