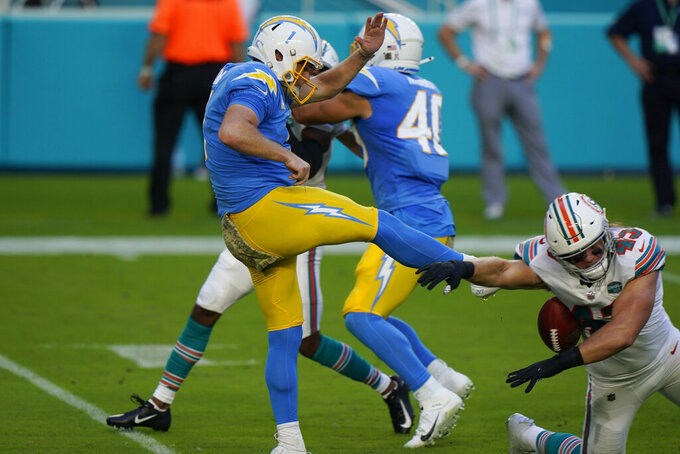 MIAMI (AP) — The Los Angeles Chargers found a way to shake their habit of losing games decided on the final play.

On Sunday, they dug a big hole early and never recovered.

The culprit was special teams. Two mistakes in the kicking game in the first quarter proved critical as the Chargers lost to the Miami Dolphins 29-21.

Miami's blitzes flummoxed the Chargers, who netted a season-low 273 yards as Justin Herbert threw for a season-low 187. But the biggest mismatch was on special teams, where the game and jobs were lost.

“There were some guys out there today who won't be out there next week, I can tell you that,” coach Anthony Lynn said.

Demotions elsewhere might also be in order. The Chargers (2-7) dropped their third game in a row and have their worst record at this point in a season since 2015.

Over the past two years, they're 3-16 in one-score games.

The seven losses have been by a total of 32 points, but the latest was the most decisive. Only an LA TD with two minutes left made the score close, and Miami recovered the ensuing onside kick to seal the win.

The Chargers are accustomed to blowing big leads, but this time they were never ahead.

Punter Ty Long bobbled a snap and had his kicked blocked to set up Miami's first score on the next play. Quenton Meeks was offside on a field-goal attempt by the Dolphins, giving them a first down that led to another touchdown for a 14-0 lead.

“When you go on the road, you can't give opponents anything,” Lynn said. “The offsides was just not very smart. That put us in the hole off the bat.”

Punt coverage was a problem, too. The Dolphins' Jakeem Grant, the NFL leader in punt return yards, helped their field position with three runbacks for 57 yards.

It all made tough work for a defense that allowed only 280 yards, even though the Dolphins scored six times.

“We gave them too much, especially early on,” safety Rayshawn Jenkins said. “We could have helped ourselves out, put it that way.”

Once the Dolphins had the early lead, they dialed up the blitz. Herbert was sacked only twice but threw a costly interception, had trouble getting the ball downfield and sometimes got rid of the ball before he needed to, Lynn said.

Miami's tactics affected the Chargers' play-calling and sometimes took the ball out of Herbert's hands. They threw it 32 times and ran it 29, but Lynn said more passes weren't a good option.

“You can't win in this league when you get one-dimensional — against a high-pressure team like that for sure," he said.

The Chargers still have only one victory since Herbert became the starting quarterback, even though he has emerged as one of the NFL's top rookies.

“You never give up,” he said. “It’s a long season. There’s a lot of football left to be played. I know going forward we’re going to be better.”