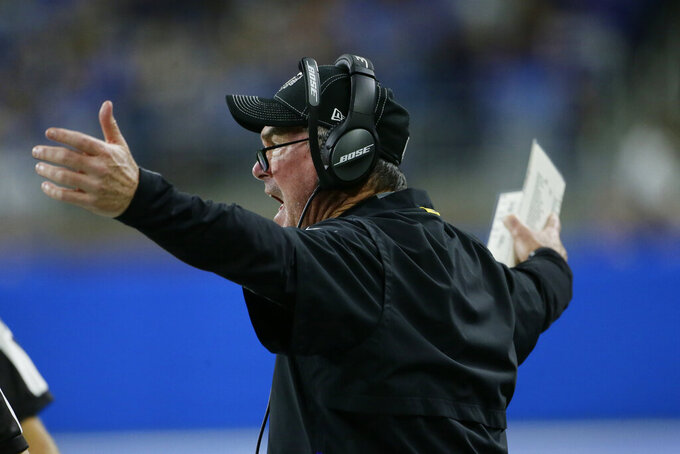 Minnesota Vikings head coach Mike Zimmer reacts on the sidelines after a call during the first half of an NFL football game against the Detroit Lions, Sunday, Oct. 20, 2019, in Detroit. (AP Photo/Duane Burleson)

EAGAN, Minn. (AP) — Though the Minnesota Vikings welcomed a weekend off at the midpoint of their season, the mini-break didn't prove to be all rest and relaxation.

The mood for coach Mike Zimmer turned sour when he learned of the late-night arrest of one of his players, Jayron Kearse. The backup free safety and special teams captain was charged on Tuesday with drunken driving and carrying a gun without a permit, after he was stopped by a state trooper while traveling on a closed section of Interstate 94 in Minneapolis early Sunday.

"I'm very, very ticked off," Zimmer said on Wednesday. "Since I've been here the last six years, I've worked extremely hard to clean up the reputation of this organization and this team off the field. We've put in a lot of resources for them to not have these kinds of issues, and for them to do that is really idiotic."

Two other people were in the car with Kearse, including Vikings cornerback Mike Hughes. After Kearse failed a preliminary breath test, according to the criminal complaint, the second officer went to check on the male passenger, Hughes, who had the door open and was vomiting. That's when the gun was discovered.

Any discipline for Kearse, under the jurisdiction of the collective bargaining agreement, would come from the NFL.

"I feel like he let me down. He let the team down. He let his teammates down, the organization down," Zimmer said.

Kearse apologized for his actions while speaking on Monday to reporters.

"It's not a reflection of who I am as a person or what this organization stands for," he said. "The team and these fans deserve better. I definitely take this matter seriously, and I'm sorry for putting anybody in harm's way and I will go through all the necessary steps to improve myself."

The Vikings, who play at Kansas City this week, had last weekend off after their win over Washington on Thursday. Zimmer was upbeat afterward, with the team on a four-game winning streak. Asked in his postgame news conference about taking a 6-2 record and a roster with relatively little injury concern into the second half of the season, Zimmer alluded to the extra time off as a reward.

"It's been a little bit against my nature, but I've taken care of these players pretty good, so hopefully we can continue to stay healthy," Zimmer said.

The lightened load started in training camp, particularly with more rest for experienced players. Zimmer recalled hearing Dallas fullback Daryl Johnston mention, when he was an assistant coach there in the 1990s, how players often felt worse at the beginning of the season than the end due to the strenuous, pounding, aggressive nature of two-a-day practices.

"That's kind of stuck with me," Zimmer said. "I think there's times that you have to do the physicality part. Usually it's at the beginning of your term as the coach, and then you kind of figure it out as you go."

During the past few seasons, players have frequently had Mondays off after victories in addition to their regular break on Tuesdays. Some practices have become walk-throughs with the pads off, for additional recovery.

"After a physical game, he pretty much shows us love, takes care of us," running back Dalvin Cook said.

Cornerback Holton Hill returned to practice on Wednesday, his eight-game suspension completed, half of it for violating the league's performance-enhancing drug policy and the other half for violating the substance abuse policy. The Vikings haven't yet added him to the active roster, so someone would have to be removed first before Hill can play.

Wide receiver Josh Doctson was also designated for return from injured reserve, taking part in his first practice in seven weeks since hurting his hamstring. He'll be eligible to play next week, should the Vikings decide to active him before their game at Dallas on Nov. 10.