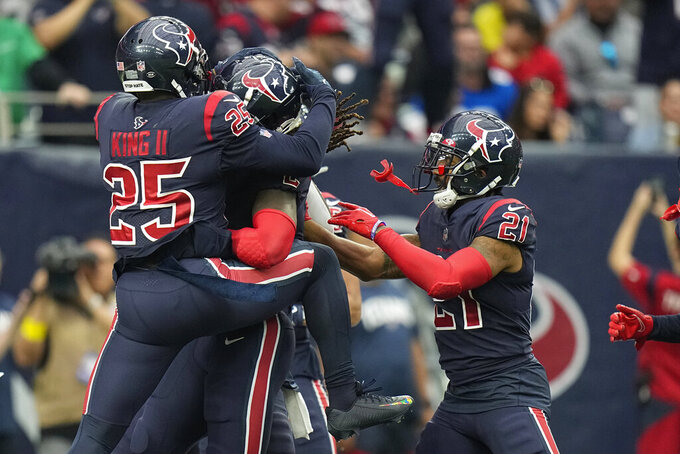 What is clear is Kyle Allen is not the answer.

Allen followed up a terrible season debut last week with an even worse performance Sunday in a 27-14 loss to the Cleveland Browns.

Allen took over last week after Davis Mills was benched and threw two interceptions in a loss at Miami. He was picked off on Houston’s first play of the game Sunday, had a fumble returned for a touchdown and an interception brought back for another score as Houston (1-10-1) dropped its seventh straight game.

“We’re not a good offense right now,” coach Lovie Smith said. “We’re still searching for what we can do well. When we did try to run the football, I thought Dameon Pierce continues to play the same way, but we’ve got to find a way, some kind of way, to get our passing game going.”

The Texans have the NFL’s worst passing offense by averaging 279.3 yards a game. The five turnovers Allen has had in the last two weeks have left the Texans at minus-6 in turnover margin, which ranks 29th in the league.

“With the pick-6 on the tip and then the fumble on the sneak and giving up 14 points, you’re just not going to win games like that,” Allen said.

Smith wouldn’t say Monday if he’d considered going back to Mills, who led the NFL with 11 interceptions before he was benched after 10 games. He also wouldn’t say if the Texans would consider adding Baker Mayfield after the 2018 top overall pick was waived by the Panthers on Monday.

“Everybody that’s available we look at to see if they fit,” Smith said. “We’re constantly trying to improve our roster. So, if there’s anybody that’s out there, we’ll look at them. ... (but) we’re trying to get better play from the guys we have on our current roster right now.”

The Texans’ defense had perhaps its best game of the season. The unit held the Browns to just two field goals on offense in Deshaun Watson’s return after he sat out almost two years after refusing to play for Houston last season and serving an 11-game suspension after two dozen women accused him of sexual harassment or assault.

Roy Lopez got a safety when he tackled Nick Chubb in the end zone and the Texans forced two turnovers for their fifth game this season with multiple takeaways.

Allen must take better care of the ball if the Texans hope to win again this season. Houston is not good enough to withstand giving opposing offenses extra possessions or, worse, allowing the defense to score.

Pierce had 18 carries for 73 yards Sunday to bounce back after combining for just 16 yards in the previous two games.

“Dameon Pierce looked more to the true form of what he’s been in the past,” Smith said. “I thought he ran hard.”

It might seem like piling on to put Allen here, too, but he’s currently the biggest problem. Mills combined for five turnovers in the three games before he was benched to force Smith to make a change. But Allen has matched that number in just two games to leave the Texans with just one win.

CB Derek Stingley, the third overall in the draft, is likely to miss a fourth straight game with a hamstring strain. ... RB Rex Burkhead is likely to return after missing Sunday’s game while in the concussion protocol. ... WR Brandin Cooks could miss this week’s game after sitting out against Cleveland with a calf injury.

1 — The Texans converted just one of 12 third downs Sunday.

The Texans will try to limit their mistakes and turnovers against a Dallas team that had five takeaways Sunday. It’s a rare matchup between these in-state rivals who have met just five times and last played in 2018.