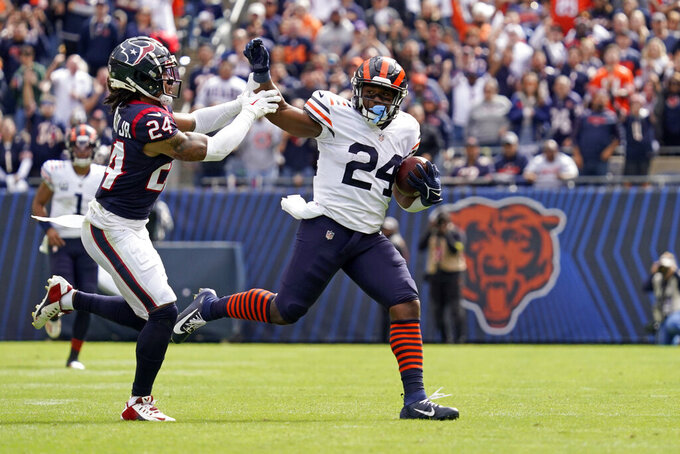 LAKE FOREST, Ill. (AP) — If not for running the football, the Chicago Bears would have very little offense.

The Bears have been able to run it throughout quarterback Justin Fields’ struggles in the passing game and Sunday had their biggest day on the ground since Walter Payton was their starting running back in 1984 with 281 total team rushing yards.

“We’re just trying to find a way to win anyway we can,” running back Khalil Herbert said.

The passing game seems to have been neglected at a league-low 78.3 yards a game, but with a 2-1 record the Bears aren’t about to be picky.

“I mean, it’s fun when it’s working,” tight end Cole Kmet said. “So whatever we’ve got to do to win, you know I’m all for this run game and how it’s been working for us.”

The Bears earned a 23-20 win over Houston and are second in the NFL in rushing at 186.7 yards a game entering Monday, while averaging a league-low 78.3 yards with Fields passing.

Bears coach Matt Eberflus had to count on Herbert to deliver the bulk of the yardage Sunday with 157 yards on 20 carries, most by a Bears running back since Jordan Howard in 2017. Herbert is their backup and had to replace injured David Montgomery, whom Eberflus said Monday is day to day with an ankle injury suffered in the first quarter.

While the Bears seem to have taken their game back several decades by winning without an effective passing game, the question Eberflus faces is obviously whether they could compete against a team if someone shut off their running attack and forced them to throw.

“I think we would have confidence,” Eberflus said. “Obviously we’re working on that part of our game in terms on the offense, and the defense. We’ve gotta shore up a lot of things on both sides. We would feel confident."

The Bears' run defense ranked last in the league after giving up 203 yards on the ground to Green Bay and 176 to San Francisco in the first two weeks.

However, against Houston it all changed. Linebackers Roquan Smith and Nicholas Morrow and defensive tackle Justin Jones led a front that took over in the second half. The Texans gained just 92 yards on the ground and only 22 of it in the second half.

“It’s demoralizing when you can’t stop the run,” defensive end Robert Quinn said. “To bring it back to this week, to have a better control of the game on defense, you know, we have to stop the run to try to make them one-dimensional.”

The passing game. The Fields-to-Darnell Mooney passing connection has resulted in four catches on the season after a season-high two on Sunday. Kmet caught his first two passes of the season on Sunday and no Bears receiver had more than two receptions. Houston’s Jalen Pitre caught as many Fields passes as any Bears receiver. He had both of the Texans interceptions.

Eddie Jackson. The veteran safety made has second interception of the season in the end zone Sunday and also forced a fumble, while presiding over a secondary that not only was short-handed but was inexperienced. The Bears played with three rookies in the secondary at times on Sunday: safety Jaquan Brisker, cornerback Kyler Gordon and cornerback Jaylon Jones. They also had Kindle Vildor at cornerback, who has started 16 NFL games.

Fields. Since he threw two touchdown passes against the 49ers in the rain-soaked season opener, Fields has no TD passes. He has four interceptions this season as his passer rating has nosedived to 50.0.

Besides Montgomery’s ankle injury, starting cornerback Jaylon Johnson missed the game with a hamstring pull and was replaced in the base Bears defense by rookie slot cornerback Gordon, and in the nickel defense by Jaylon Jones. Johnson’s injury is day to day.

16 — The number of tackles made Sunday by Smith, who helped beat Houston with an interception in the final two minutes. It was one off his career high for tackles set last season against Baltimore.

The Bears travel to play the New York Giants on Sunday.