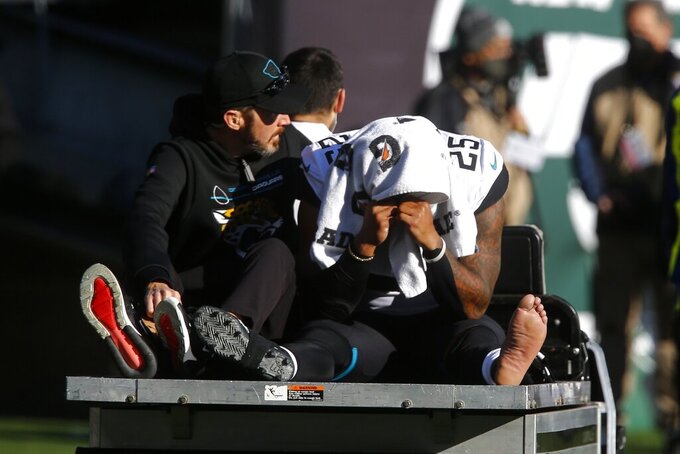 Jacksonville Jaguars running back James Robinson (25) is carted off the field during the first half of an NFL football game against the New York Jets Sunday, Dec. 26, 2021, in East Rutherford, N.J. (AP Photo/John Munson)

The Buffalo Bills’ already beleaguered offensive line was dealt another blow when left guard Ike Boettger was carted off the field with a ruptured Achilles tendon in a big win against New England, and Jacksonville running back James Robinson left the Jaguars’ game against the New York Jets with an torn Achilles tendon.

Those were the major injuries on a day when several teams had multiple players out after being placed on the COVID-19 list.

The Houston Texans damaged the Los Angeles Chargers' playoff chances in a 41-29 stunner in which both teams were missing more than a dozen players because COVID-19 protocols. The Chargers were without outside linebacker Joey Bosa, running back Austin Ekeler, receiver Mike Williams and center Corey Linsley. Houston had 16 players on the COVID-19 list, including top receiver Brandin Cooks, center Justin Britt, defensive end Jonathan Greenard and kicker Ka’imi Fairbairn, but won consecutive games for the first time this season.

Boettger was carted off early in the second half of the Bills’ 33-21 win at Foxborough. Buffalo looked to be on its way to being in decent shape health-wise up front after left tackle Dion Dawkins was cleared from the reserve/COVID-19 list on Saturday. However, starting right guard Jon Feliciano wasn’t cleared from COVID-19 list in time to play.

At East Rutherford, New Jersey, Robinson went down without contact on Trevor Lawrence’s handoff to Tavon Austin late in the first quarter. He remained down for a few moments, appearing to reach at his lower right leg. Robinson was checked on by doctors and trainers, who then helped him limp off the field to the medical tent on the sideline. He was taken to the locker room on a cart.