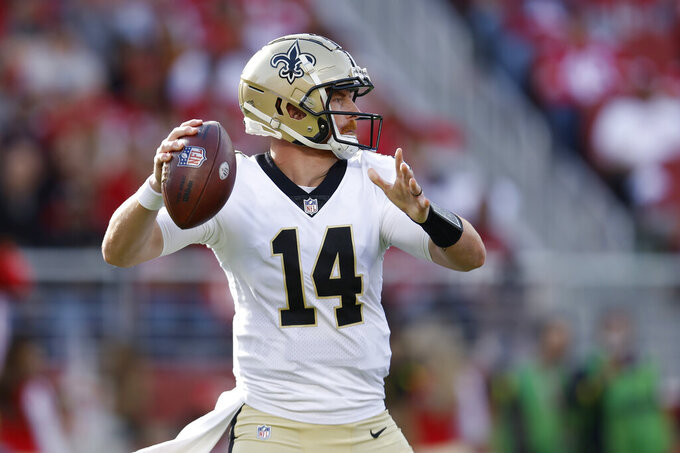 TURNOVER DIFFERENTIAL: Saints minus-14; Buccaneers plus-2

SAINTS PLAYER TO WATCH: Rookie WR Chris Olave leads all rookies in receptions with 56 and yards receiving with 822. He also leads the Saints in both categories and has three TD catches.

BUCCANEERS PLAYER TO WATCH: Tom Brady leads the NFC in passing with 3,051 yards and has only been intercepted twice, once since a season-opening victory over the Dallas Cowboys. The seven-time Super Bowl champion has struggled against New Orleans since moving to Tampa Bay, including going 18 of 34 for 190 yards and a touchdown in the first meeting between the teams this season.

KEY MATCHUP: Andy Dalton vs. a defense that sacked Jameis Winston six times and also had three interceptions and recovered two fumbles in Tampa Bay’s 10-point victory over the Saints in September. Dalton, who’s started the past nine games, was 18 of 29 for 204 yards in last week’s shutout loss at San Francisco.

SERIES NOTES: The Saints lost to the Buccaneers at home in Week 2, however New Orleans has won seven of the past eight regular-season meetings between the NFC South rivals. They’ve won four of five since Tom Brady joined the Bucs in 2020, although Tampa Bay did win a playoff matchup on the way to winning the Super Bowl two years ago.

STATS AND STUFF: Dalton did not play during the loss to Tampa Bay in September. He has been the Saints’ starter since Week 4. ... RB Alvin Kamara has 946 scrimmage yards as he closes in on his sixth straight season with 1,000. Kamara needs one reception for his fifth season with at least 50 catches. His 422 catches since entering the NFL in 2017 gives him the second-most receptions by a running back in their first six seasons in NFL history behind only Roger Craig (434). ... WR Jarvis Landry has a receiving TD in two of his three games vs. Tampa Bay. ... TE Juwan Johnson is tied for second among TEs with five TDs receiving this season. ... DE Cameron Jordan has nine tackles for loss and aims for his eighth straight season with at least 10 TFL. ... Jordan has 5 1/2 sacks this season and can become the sixth player since 1982 with at least seven sacks in 11 straight seasons. Jordan has 17 sacks and 18 TFL in 23 games vs. Tampa Bay. ... LB Demario Davis has nine, nearing his sixth straight with at least 10. Davis has at least seven tackles in each of his past four games. Davis recovered a fumble against the Bucs in Week 2. ... LB Kaden Ellis had a career-high 14 tackles last week and has 3 1/2 sacks in his past four games. Ellis had at least 11 tackles in each of the previous two games. ... CB Paulson Adebo had two passes defensed last week and aims for his fourth game in a row with at least five tackles. ... At age 45, Brady has topped 3,000 yards passing for a record 20th time in 23 NFL seasons. ... Last week, WR Mike Evans joined Hall of Famers Jerry Rice, Calvin Johnson, Marvin Harrison and Randy Moss, as well as Larry Fitzgerald, as the only players in league history with more than 10,000 receiving yards and at least 75 TD catches in the first nine seasons of a career. ... LB Devin White led the defensive effort against the Saints in Week 2 with 11 tackles, a sack and a forced fumble. The former LSU star has at least 10 tackles in five of six games against his home-state team. ... WR Julio Jones has 102 receptions and averaged 89.7 yards per game receiving in 18 meetings vs. New Orleans.

FANTASY TIP: Bucs WR Chris Godwin had 12 catches for 110 yards and a TD last week in his best overall game since returning from suffering a season-ending knee injury against the Saints last December. Still, look for Brady to get Evans more involved Monday night after the team’s leading receiver was targeted nine times but only had two catches for 31 yards against the Browns.