Broncos rule out 3 vs Titans, 3 questionable with illnesses 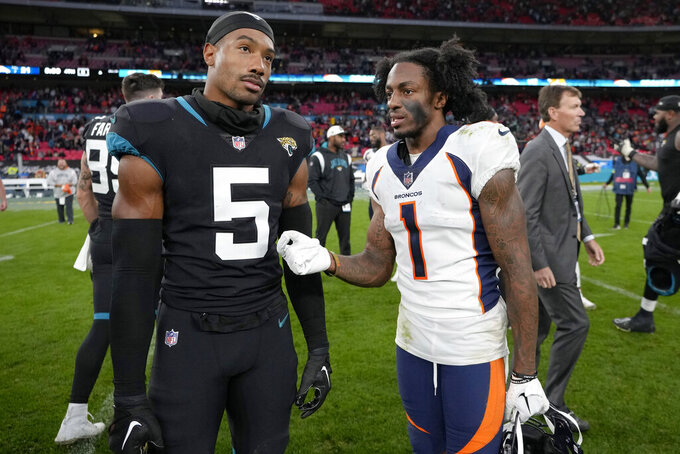 ENGLEWOOD, Colo. (AP) — The Denver Broncos ruled out three players for their game at Tennessee on Sunday, including two who pulled hamstrings at practice this week. They also added two more sick players to their injury report Friday.

Hamler got hurt in a non-contact portion of practice Wednesday and Beck suffered a similar injury under similar circumstances a day later.

Hackett also said linebacker Nik Bonitto, cornerback Darius Phillips and receiver Kendall Hinton are all questionable because of illness. Phillips has missed practice all week, and Bonitto and Hinton came down sick Friday.

Hackett declined to say if they were non-COVID-19 illnesses as coaches usually do when players contract a different virus like the common cold or flu.

“They just got an illness," Hackett said. "There's a lot of illness going around everywhere, at my kids' schools, everywhere.”

Also questionable for the Broncos (3-5) is star safety Justin Simmons, who sprained a knee in Denver’s win over the Jaguars in London two weeks ago. Simmons missed one day of practice but appeared on track to play Sunday.

Hamler and Beck will be the eighth and ninth Broncos players to miss a game this season with a strained hamstring.

Asked about the rash of hamstring injuries, Hackett said, “We evaluate everything. We've got really good people here. And everybody's doing everything we can to get these guys ready to be out in practice, in the games, and to be able to play at a high level.”

“Those things happen,” Hackett added. “They happen. It's part of the game. Some are early in practice, some are middle of practice. And you never know when that's going to happen. Some guys are more susceptible than others. I mean, there's so many things that go into that. It's not just one thing. And we're going to do everything we can to prevent that.”

Hackett's practice philosophies have been scrutinized after he went easy on his players in training camp in the interest of safety only to see an injury epidemic batter his team all season.