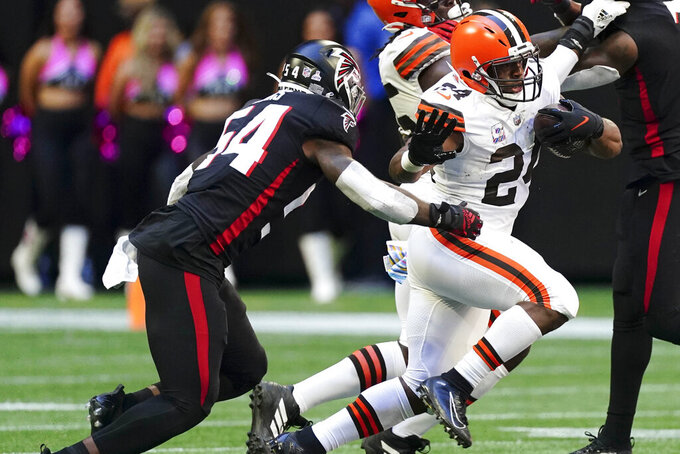 CHARGERS PLAYER TO WATCH: QB Justin Herbert threw for a season-high 340 yards last week despite playing with a rib injury. He is the only QB in the league this season with at least two TD passes and a passer rating in triple digits in three games. Herbert is looking to join Rich Gannon as the only QBs with 300-yard games in eight straight road starts. Gannon did it with the Raiders in 2001-02.

BROWNS PLAYER TO WATCH: RB Nick Chubb. The AFC's leading rusher with 459 yards and five TDs, Chubb could be primed for another big day against a Chargers defense that gave up a 75-yard rushing TD last week to the Texans. Chubb's workload could be ready for an increase. He's only had more than 20 carries once through four games.

KEY MATCHUP: Herbert vs. Cleveland's secondary. The Browns have been prone to major breakdowns so far this season, and they can't afford any gaffes against the Chargers' quick-strike offense and top-rated passing attack. Herbert passed for 398 yards and four TDs last year against the Browns.

SERIES NOTES: Chargers have won three straight, four of the past five and eight of the past 10. ... Cleveland's only win in 2016 came on Christmas Eve against the Chargers. ... The Chargers are 13-0 when scoring at least 25 points against the Browns.

STATS AND STUFF: Chargers head coach Brandon Staley grew up in Perry, Ohio, less than an hour from Cleveland. He also was the defensive coordinator at nearby Division III John Carroll University for three years (2013, ’15-16). ... Herbert leads the NFL with 1,250 yards passing. ... Herbert has more completions of 40-plus yards (29) than any QB since 2020. ... Los Angeles' offensive line has allowed a league-low four sacks through the first four games. ... RB Austin Ekeler leads the league with 235 yards after the catch and is third in the AFC with 27 receptions. Last week was the fourth time since 2019 he has had at least three TDs in a game. ... The Chargers defense has a league-leading 14 strip-sacks since the start of last season. ... WR Mike Williams has four straight 100-yard receiving games on the road, one shy of the AFC record held by Cincinnati's Chad Johnson. ... TE Gerald Everett has at least 50 receiving yards in three of four games this season. ... Chargers LB Khalil Mack ranks second in the AFC with five sacks. .... CB Bryce Callahan has already tied a career high with two interceptions. ... S Derwin James needs 13 tackles to reach 300 for his career. ... The Browns have been plagued by fourth-quarter defensive breakdowns in three games, two of them losses. ... Cleveland's defense is giving up a league-worst 7.83 yards per play in the fourth quarter this season. ... Garrett needs just one sack to pass Clay Matthews (62) for the team career record. Matthews had 13 other sacks before it became an official stat in 1982. ... The Browns have rushed for at least 150 yards in all four games. They've only done it five times to start a season twice (1947, 2001). ... QB Jacoby Brissett has been solid while holding down Deshaun Watson's starting spot during his 11-game suspension, completing 65% of his passes. ... WR Amari Cooper was held to just one catch for 9 yards last week by the Falcons. ... The Browns struggled in the red zone last week, picking up just 7 yards on 11 plays on three trips inside the Atlanta 11-yard line in the first half. ... Watson is eligible to return to the Browns' facility on Monday, but can't begin practicing until next month.