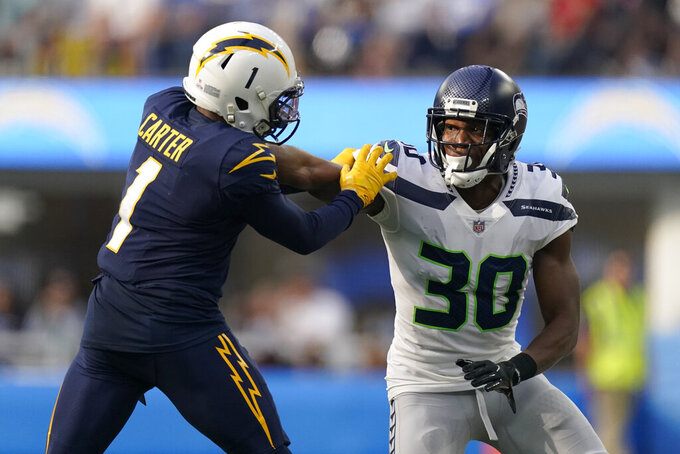 INGLEWOOD, Calif. (AP) — The Los Angeles Chargers have plenty of experience digging out of early holes this season, recovering from double-digit deficits in the first quarter to win in each of their past two games before they hosted the Seattle Seahawks on Sunday.

But after spotting the visitors a 17-0 lead, the Chargers received a humbling reminder that those margins often hold up as they lost 37-23.

“Sheesh, yeah, you’re not going to win many games going down 17-0. That’s just the truth,” running back Austin Ekeler said. “It’s the NFL. You have to be able to hold your own and come out (fast).”

It seemed as if the Chargers (4-3) were ready when cornerback Asante Samuel Jr. tipped Geno Smith’s pass and linebacker Kenneth Murray Jr. intercepted it at the Seattle 41-yard line on the opening possession.

But Ekeler was stopped inches short on fourth down, and the Seahawks (4-3) drove 68 yards, bolstered by a pass-interference penalty on third down, before striking with a 20-yard touchdown pass from Smith to Marquise Goodwin.

Los Angeles quarterback Justin Herbert was picked off on the ensuing drive, telegraphing a throw over the middle, which led to a rushing touchdown for Seattle.

Finally, Herbert had the ball knocked loose from behind, setting up a 46-yard field goal and a 17-0 hole for the Chargers with 1:08 left in the opening quarter.

After the Chargers averaged 1.2 yards per carry in the quarter while failing to convert any of the three third-down opportunities they faced and those two turnovers, Ekeler was as befuddled as anyone.

“You tell me, man. You tell me,” Ekeler said. “We’re searching, we’re trying. We don’t come out trying to start slow. It came down to us being inconsistent in our first downs, in my opinion. We’re gonna have to switch it up there.

“But if you find that answer, you let us know. We’ll hire you,” he added.

The Chargers cut the deficit to 17-14 before Goodwin caught his second touchdown pass with 1:40 left in the half.

Coming off an exhausting overtime win against Denver on Monday night, the energy expended in that rally dissipated for good during a marathon 17-play drive by the Seahawks that took 10:20 off the clock, culminating in a field goal.

Staley and his players tried to strike a balance between optimism and realism as they reflected on where they stand going into their bye week. They are one game behind Kansas City in the AFC West in spite of numerous injuries.

At the same time, they have been plagued by a one-dimensional offense that struggles to protect Herbert. The defense is giving up big plays, including a game-clinching 74-yard touchdown run to Kenneth Walker III, and struggles to get off the field. And the list of ailments got longer with cornerback J.C. Jackson sustaining a non-contact knee injury before halftime that Staley deemed “serious” and wide receiver Mike Williams coming down hard on his ankle in the fourth quarter.

“And the reality is, through seven games, we’ve had to fight really hard to be 4-3. And we’ve endured a lot, and our season is in front of us, which is the truth,” Staley said.

James believes the Chargers can still deliver on their lofty expectations, but he knows it has to start immediately at Atlanta on Nov. 6.

“I say that you take it week by week and continue to get better. And I feel like no one’s down on the season,” James said. “No one is pointing any fingers. We still believe in everything. Everything we want still in front of us.”