Chargers continuing to show mettle in rallying for victories 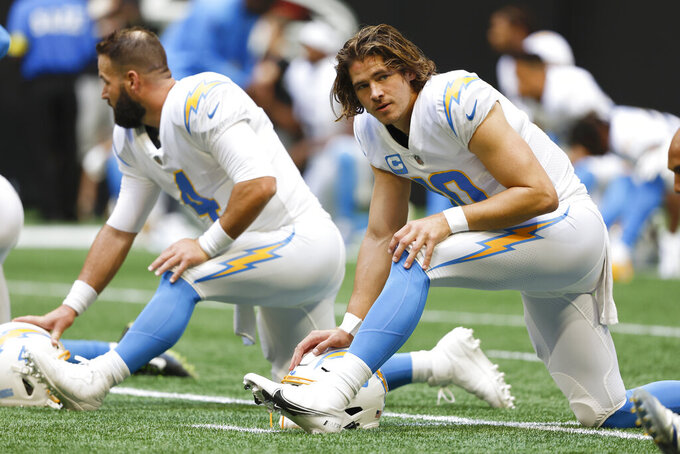 Instead of bringing up the past, Brandon Staley would like everyone to focus on the here and now when it comes to the performance of his Los Angeles Chargers team.

The problem though is that this year isn't looking much different from previous seasons.

No matter the coach, the Bolts continue to be blindsided by injuries and most games coming down to the final possession. The difference this time is that they are winning most of them.

Two years ago, the Chargers became the second team in league history to lose three games when leading by at least 17 points. With Sunday's 20-17 victory at Atlanta, they are the fifth team to win three games when trailing by double digits at the end of the first quarter.

The victory put Los Angeles at 5-3 for the second straight season as it tries to make the playoffs for the first time since 2018.

“Since I’ve been the head coach, we’ve played in a bunch of close ones, and we’re comfortable in this space. When you have as many people go down as we have throughout the season and you go on the road, it’s not going to be poetic," Staley said. “We’ve been able to hang tough together and get going and then finish the game playing our best.”

The Bolts are over .500 despite their top two receivers — Keenan Allen and Mike Williams — being sidelined and outside linebacker Joey Bosa not expected to be back until early December.

Cameron Dicker, who made the game-winning field goal from 37 yards, is the third kicker they've used this year because of injuries to Dustin Hopkins and Taylor Bertolet.

While the Chargers have shown fortitude in rallying, none of their wins have come against teams with winning records. Los Angeles' .329 strength of victory winning percentage is the second lowest in the league.

“I’d much rather have a boring win where we beat a team by a lot of points than having sweet victory where we didn't play our best football,” wide receiver Josh Palmer said.

Justin Herbert continues to thrive despite playing most of the first half of the season with a rib injury.

He has also found a way to maximize an offense where his two top receivers have played together only four quarters in the first eight games.

Entering Monday, Herbert is among the top five in passing yards despite Allen missing six games because of a hamstring injury and Williams suffering an ankle injury against Seattle on Oct. 23 that will keep him out for at least three games.

Staley came in with the pedigree of a defensive mastermind but has yet to show it. The defense has given up a run of at least 40 yards in six games and is allowing a league-high 5.7 yards per carry. That is the third-highest yards per carry allowed by a team in its first eight games since 1947, trailing the 1952 Dallas Texans (6.0) and 1959 Washington Redskins (5.9).

After battling injuries for part of the season, Joshua Palmer is showing he can step up when needed. The second-year wide receiver got his first 100-yard game against the Falcons with eight receptions for 106 yards, including two on third down and three for at least 20 yards.

Isaiah Spiller was expected to take over as the second running back, but has struggled during his rookie season. The fourth-round pick has played in only two games and has eight carries for 24 yards.

DL Austin Johnson is out for the rest of the season after fracturing his left knee and spraining his MCL. Allen, Williams and Hopkins (hamstring) will likely miss a couple of more games. TE Donald Parham (hamstring) was placed on injured reserve on Saturday, which could open up more opportunities for Tre McKitty.

10 — Games where Austin Ekeler has scored both a rushing and receiving touchdown. That is tied with Alvin Kamara and Christian McCaffrey for the most by a player within the first six seasons of a career.

The Chargers head to San Francisco for a Sunday night game against the 49ers before returning home to face the Kansas City Chiefs on Nov. 20. Four of the final nine opponents on Los Angeles' schedule are at or over .500.