Chargers' Ekeler questionable vs. Patriots due to hip injury 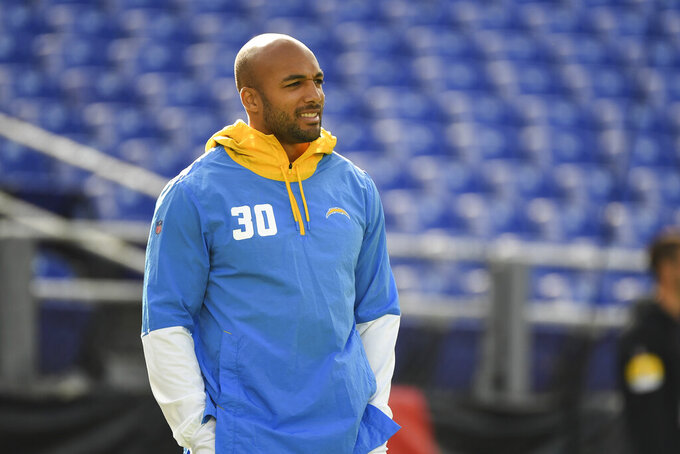 COSTA MESA, Calif. (AP) — Chargers running back Austin Ekeler is questionable for Los Angeles' game against New England on Sunday due to a hip injury.

Ekeler was a full participant on Wednesday but felt soreness in his hip after practice. He was sidelined on Thursday and Friday, but coach Brandon Staley appeared as if he was trying to be cautious.

“He has felt better the last two days, so hopefully he can play,” Staley said. “He had an incredible practice on Wednesday. His speed and workflow was amazing.”

Ekeler is second in the AFC with seven touchdowns and fifth among running backs in scrimmage yards per game (99.7). He rushed for a career-high 117 yards in the Oct. 4 win over Las Vegas and has gone over 100 yards from scrimmage in four of the past five games.

If Ekeler is unable to play, Justin Jackson would likely get the start with Larry Rountree and Joshua Kelley as the backups. Neither one though has emerged as a dependable second option.

“Sometimes we’re not getting enough reps to really make a fair judgment on how those guys are doing in games, because Austin’s getting a heavy load,” offensive coordinator Joe Lombardi said. "But, I think it’s a work-in-progress to really see who that guy is.”

Linebacker Drue Tranquill also is listed as questionable due to a pectoral injury. Staley said it remains possible that defensive lineman Justin Jones could be activated off injured reserve after missing the past five games due to a calf injury.

Los Angeles (4-2) is coming off its bye week and looks to avenge last season's 45-0 loss to New England. The Patriots (3-4) have won two of their last three.