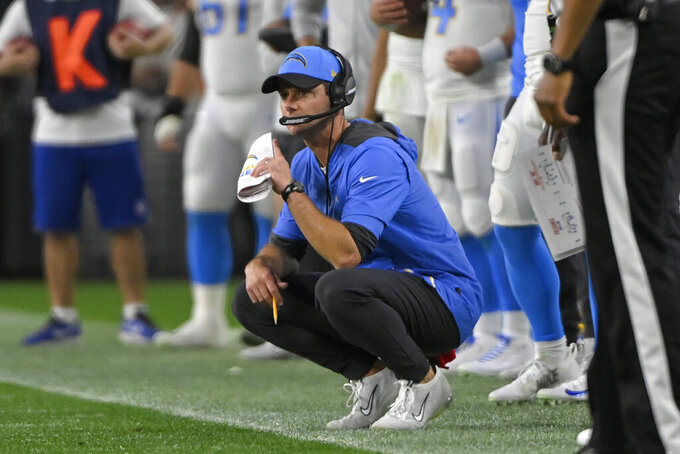 The Chargers finished 9-8 in Staley’s first season, but missed the playoffs after losing three of their final four games. That included a 35-32 overtime loss to the Las Vegas Raiders in the last game of the regular season.

Under Telesco, the Chargers have reached the playoffs only twice during his nine-year tenure and finished with a winning record five times. The Chargers are 71-78 since 2013, with their .477 winning percentage ranking 18th in the league.

“I don’t think a lot about job security,” Telesco said during his season-ending news conference Thursday. “I think that there’s a lot there to be proud of with this football team and how they play. I understand that people want results right now, and they should have results right now, but this team is different than the team a couple of years ago. I’m just focused on 2021 and then getting better for 2022.”

Los Angeles began the season with wins in four of its first five games, but won back-to-back games only once after early October. While Staley’s fourth-down decisions late in the season brought plenty of second-guessing, Telesco likes the aggressive mentality the Chargers coach has brought.

“All of these decisions, even though they’re made in real-time, there’s research involved in it prior to the game.”

A big reason the Chargers didn’t advance to the postseason is their defense. They struggled in their transition to Staley’s attacking 3-4 scheme. The Chargers hired Staley after he made the Rams the top-ranked defense in 2020.

The Chargers allowed 269 points after halftime, tied with the 2015 New Orleans Saints for most since 1991. The 138.9 yards per game allowed on the ground was fourth-worst in the league and worst by a Chargers defense since 2003.

“It just didn’t come along as quickly enough, on defense, as I thought it would,” Telesco said. “We had a lot of stretches this year that the players that are out there did some pretty good things, but we weren’t consistent enough by any means. We have to take a good look at that, and we have to get better, there’s no doubt about that.

Four of the Chargers’ key free agents are on the defensive side of the ball — tackles Justin Jones and Linval Joseph, along with linebackers Kyzir White and Uchenna Nwosu.

The Chargers’ biggest free agent will be wide receiver Mike Williams, who set a career high in catches (76) and yards (1,146). Telesco did not give any hints about possibly using the franchise tag on Williams if the two sides can't agree on an extension.

While most of the offseason priorities will be on upgrading the defense, Telesco will also take a look at the right side of the offensive line and continue to build depth throughout the entire roster. Los Angeles is likely to enter free agency with nearly $70 million in cap space, second-most in the league. Telesco will also look at signing safety Derwin James to an extension.

The one area Telesco and Staley do not have to worry about is quarterback after Herbert became the first in franchise history to throw for at least 5,000 yards (5,014) and 38 touchdowns. Telesco, though, discounted the notion there was a competitive window due to Herbert being on a rookie contract.

“You have to build it differently, but certainly you can do it. I don’t see that we only have a year or two window with this quarterback’s contract. It’s not how I look at it at all,” Telesco said. “We’re focused on 2022. What can we do in 2022 to go win a championship? It doesn’t really bother me whether the quarterback is on a rookie deal or on an Aaron Rodgers deal.