Chargers limping into the bye week in search of answers 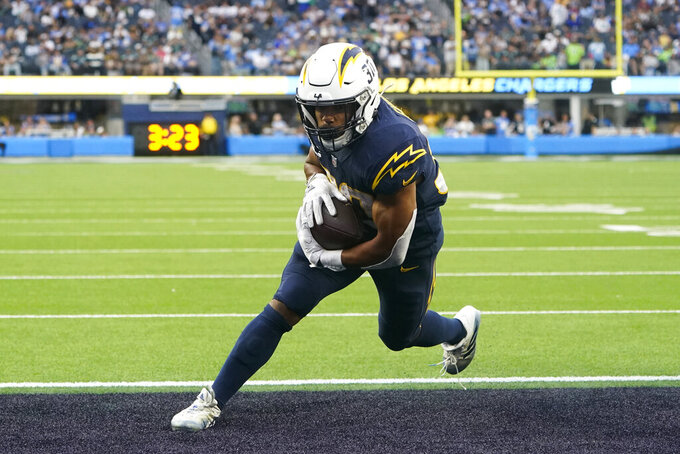 Los Angeles Chargers running back Austin Ekeler (30) scores a touchdown during the second half of an NFL football game against the Seattle Seahawks Sunday, Oct. 23, 2022, in Inglewood, Calif. (AP Photo/Marcio Jose Sanchez)

It would be an understatement to say the Los Angeles Chargers are limping into their bye week.

Brandon Staley and his coaching staff’s ability to weather injuries will undergo one of its biggest challenges after Sunday's 37-23 loss to the Seattle Seahawks.

The Bolts were already missing linebacker Joey Bosa (groin) and offensive left tackle Rashawn Slater (bicep). Now, they will have to make do without cornerback JC Jackson and wide receiver Mike Williams.

Jackson suffered a season-ending injury when he tore the patellar tendon in his right knee while contesting a catch in the second quarter.

Williams sustained a high right ankle sprain that will keep him out for multiple games.

The receiving group has already been without Keenan Allen for most of the season. Allen strained his hamstring in the first half of the opener against Las Vegas, missed the next five games, and saw limited action against the Seahawks. He played the first half and had two receptions for 11 yards.

Staley’s biggest priority during the bye week is to assess the roster and begin coming up with a game plan to face Atlanta on Nov. 6.

Despite an opening stretch fraught with injuries, the Chargers are 4-3 and only one game behind Kansas City in the AFC West. Staley hopes his team can get some rest as things expect to get more difficult.

“A lot has happened in seven games,” Staley said. “Our mindset is that we got to trust the people coming in for those guys. We have got to keep it moving.

“Hopefully, our guys are seeing that it may not be pretty when you’re figuring it out. We may not be winning like how others want us to win or how we even want to win but we were able to find a way to get it done. That’s going to be our mindset moving forward. I think through seven games, we’ve learned a lot. But as hard as we’ve had to fight through seven games, we’re going to have to fight a hell of a lot harder in these last 10 to 13 games.”

Austin Ekeler is catching the ball out of the backfield at a near-record rate. With 12 receptions for 96 yards and a TD against the Seahawks, he is the sixth running back in NFL history to have at least 10 catches in consecutive games and the first since Chicago’s Matt Forte in 2014.

With 53 catches, Ekeler is the third running back in league history with at least 50 receptions in his team’s first seven games. New Orleans’ Alvin Kamara had 55 in 2020, and Forte had 52 in 2014.

Defending outside runs. Kenneth Walker III’s 74-yard sprint up the right sideline made the Chargers the first team since the 1995 Arizona Cardinals to allow four rushing TDs of at least 40 yards in the first seven games, according to Sportradar. Three have gone for at least 50 yards, but the previous occurrence of that was by the Detroit Lions four years ago.

To make matters worse, the Chargers have allowed four runs of at least 50 yards. Except for the 50-yard TD off left tackle by former Jacksonville running back James Robinson, the others have a familiar pattern — running plays off the right side of the offensive line. Walker’s and the 75-yard score by Houston’s Dameon Pierce four weeks ago were pitches to the running back where they built up plenty of speed to the outside and got great blocking from the offensive line and receivers upfield.

Gerald Everett had five receptions for the third time in the past four games. The sixth-year tight end is in his first season with the Chargers. He has become one of Justin Herbert’s more dependable options because of injuries to the receivers.

Fourth-and-Staley: Brandon Staley’s aggressive play-calling on fourth down got off to a roaring start last season when the offense converted on its first seven opportunities. Since then, the Chargers have gone 22 of 43.

Los Angeles is 7 of 17 this season, with its 41.2% conversion rate below the league average of 48.2%. It was 1 of 3 against the Seahawks, including Ekeler being stopped for no gain on fourth-and-inches at the Seattle 32-yard line on the game’s opening drive. Seattle went down the field and took a 7-0 lead eight plays later when Marquise Goodwin caught a 20-yard TD pass from Geno Smith.

Besides Williams, LB Chris Rumpf (knee) is also expected to be out for multiple weeks. ... WR Josh Palmer and TE Donald Parham remain in concussion protocols.

3: Consecutive games Herbert has not passed for 300 yards, the first time that has happened in his three-year NFL career.

The Chargers will need to do plenty of healing up during the bye week, with four of their next five games being on the road, beginning on Nov. 6 against Atlanta. The only home game during that stretch isn’t an easy task either since that will be against Kansas City on Nov. 20.