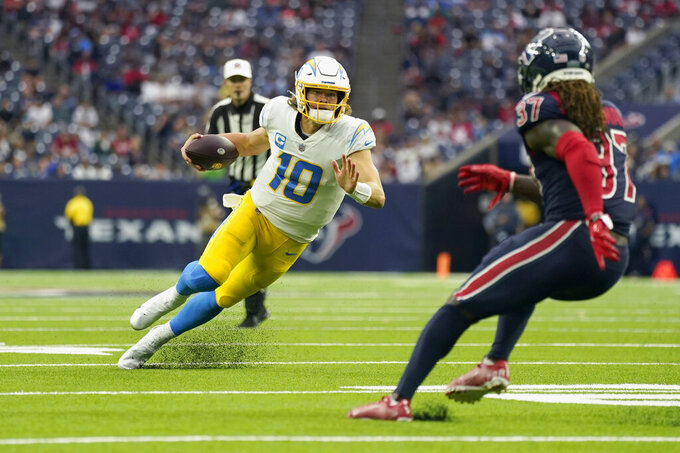 BETTING LINE: Chargers by 6, according to FanDuel SportsBook.

BRONCOS PLAYER TO WATCH: CB Patrick Surtain II had two interceptions in the first game against the Chargers, returning one 70 yards for a touchdown. Surtain is the first Denver rookie to pick off four passes in his debut season since 1973, and his 12 passes defended are tied for 16th among all NFL players.

CHARGERS PLAYER TO WATCH: OLB Joey Bosa didn’t play against Houston because of COVID-19, and Los Angeles desperately missed him in the shocking loss that damaged its playoff hopes. Without Bosa and his 9 1/2 sacks, the Chargers could not generate consistent pressure and saw their secondary get picked apart. Bosa has 6 1/2 sacks in 10 career games against Denver.

KEY MATCHUP: Broncos RBs Melvin Gordon III and Javonte Williams vs. Chargers’ front seven. Denver could not get its ground game going against Las Vegas, getting 18 yards on 16 carries, and putting undue stress on QB Drew Lock to carry the offense. They can’t have it happen again facing a Los Angeles defense that has struggled to stop the run all season, including getting gashed for 189 yards by the lowly Texans. Getting key DL Justin Jones off the COVID-19 list should help the Chargers’ cause, as could the return of S Derwin James Jr. from a hamstring injury.

KEY INJURIES: Lock will make his second straight start as Teddy Bridgewater continues to recover from a concussion. WR Tim Patrick, who leads the team with five touchdown receptions and is second with 639 yards receiving, is not expected to play after going on the COVID-19 list Wednesday. Denver did get starting C Lloyd Cushenberry III back from the virus reserve list. … James looks to be trending in the right direction, which would give the Chargers their defensive play caller and most versatile option in the secondary back. LB Drue Tranquill doesn’t seem likely to go after hurting his ankle last week. RB Austin Ekeler, C Corey Linsley, and WR Jalen Guyton will join Bosa in returning after a stint on the COVID-19 list kept them out against Houston.

SERIES NOTES: The Broncos have beaten the Chargers in four of the past five. … Denver’s 15-point win in Week 12 ended a run of four straight games in the series decided by one possession. … Los Angeles won 19-16 in the first meeting played in SoFi Stadium in Inglewood, California last December.

STATS AND STUFF: The Broncos must win to avoid their fifth straight losing season. It would be their longest such streak since 1963-1972, a run that includes their last seven years in the AFL and first three years in the NFL. … Lock has thrown for 646 yards, five touchdowns and four interceptions in three starts against Los Angeles. Denver won two of those three games. … Third-down success was vital to the Broncos winning the first meeting against the Chargers. They converted 72.7% (8 of 11), the best single-game mark by the team dating back to 1991 when the statistic began being tracked. … Williams has 827 yards rushing, while Gordon has 765 yards to become the fourth Denver duo to both top 700 yards. Two backs topping 800 yards has happened only once in team history, when Mike Anderson ran for 1,014 yards and Tatum Bell added 921 yards in 2005. … Chargers WR Keenan Allen has caught at least 95 passes in five straight seasons. That is the second-best streak in NFL history following Antonio Brown’s six straight seasons in 2013-2018. … Justin Herbert needs two touchdown passes to set a Los Angeles single-season record. Philip Rivers threw 34 in 2008. … The Chargers’ 6.0 yards per play average on offense is best in the AFC. They are one of four teams in the NFL averaging at least 6 yards per play, along with the Rams (6.1), Tampa Bay (6.0) and San Francisco (6.0). … Los Angeles has forced 17 fumbles. That includes a league-best 10 strip-sacks, with Bosa accounting for six.

FANTASY TIP: With Denver having allowed just three touchdown passes in its past four games, it might be worth considering other QB options besides Herbert. In three games against the Broncos, he has thrown six touchdowns against four interceptions and taken seven sacks.