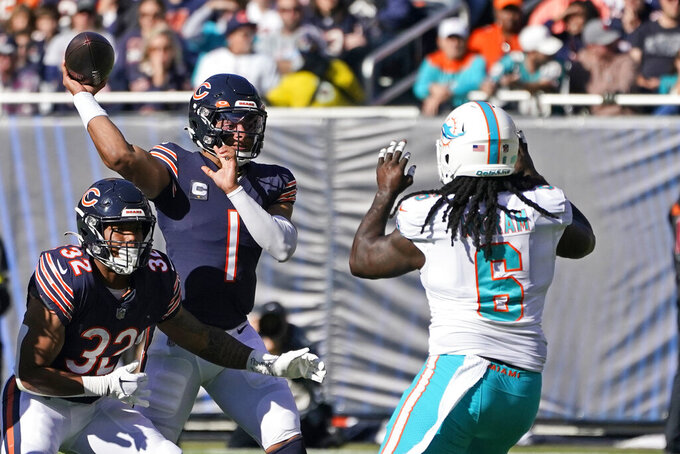 TURNOVER DIFFERENTIAL: Lions minus-3; Bears plus-1.

LIONS PLAYER TO WATCH: Amon-Ra St. Brown. He will be motivated for bragging rights against his older brother, Equanimeous, a Chicago receiver, and to end a scoring slump. Detroit’s second-year receiver has gone five straight games without a touchdown after scoring in six in a row going back to last season.

BEARS PLAYER TO WATCH: QB Justin Fields put on a show last week, with 178 yards rushing — the most by an NFL quarterback in a regular-season game since at least 1940. He also became the first player since at least 1950 with at least 150 yards rushing and three TD passes in a game. Fields leads the team in rushing with 602 yards and is averaging 6.6 yards per attempt — second to Baltimore’s Lamar Jackson.

KEY MATCHUP: Bears WR Chase Claypool against Lions CB Jeff Okudah. Claypool caught two passes last week in his Chicago debut after being acquired from Pittsburgh. He's had a week to get more comfortable and familiar with the system. And if he produces the way the Bears hope, he'll give quarterback Justin Fields a downfield threat.

SERIES NOTES: The Bears have won seven of eight against Detroit, beating the then-winless Lions last Thanksgiving on a game-ending field goal by Cairo Santos. Andy Dalton started that game for Chicago with Fields sidelined because of a rib injury. ... Chicago has 60 home wins over Detroit, the most against any opponent.

STATS AND STUFF: Detroit stopped a five-game losing streak last week. ... The Lions hope to win consecutive games for the first time since beating Jacksonville and Atlanta in October 2020. ... RB Jamaal Williams joined Calvin Johnson (2011), Herman Moore (1995), Barry Sanders (1990) and Billy Sims (1980) as the only Lions with at least 600 scrimmage yards and 50 points through eight games in a season. ... Rookie TE James Mitchell and TE Shane Zylstra each scored their first TDs last week, with increased roles after T.J. Hockenson was traded to Minnesota. ... The Lions had three interceptions against Aaron Rodgers last week after picking off two passes over the first seven games. ... Detroit has 12 sacks, tied with Atlanta for second fewest in the NFL. Chicago has 13. ... Rookie DE Aidan Hutchinson’ leads the team with 4 1/2 sacks. No other Lion has more than 1 1/2. ... Joseph, a third-round pick from Illinois, is the fourth NFL defensive back with at least two forced fumbles and INTs in the first eight games of a career, joining Chicago's Kyle Fuller (2014) and Charles Tillman (2003) and Kansas City's Greg Wesley (2000). ... Chicago has lost five of six. ... The Bears joined the 1976 Pittsburgh Steelers as the only teams in the Super Bowl era to run for at least 225 yards in four straight games. They are the first since New England in 1978 to get at least 200 yards in four consecutive outings. ... The Bears have allowed 84 points over the past two games. ... RB Khalil Herbert has 586 yards rushing and is averaging 6 yards per attempt. ... S Eddie Jackson is tied for second in the NFL with four interceptions. ... WR Darnell Mooney caught his first TD of the season last week.

FANTASY TIP: Fields got his first career win as a starter when the Bears beat the Lions at Soldier Field in Week 4 last season. And he could be in line for another big game facing a team giving up more yards and points than any other.