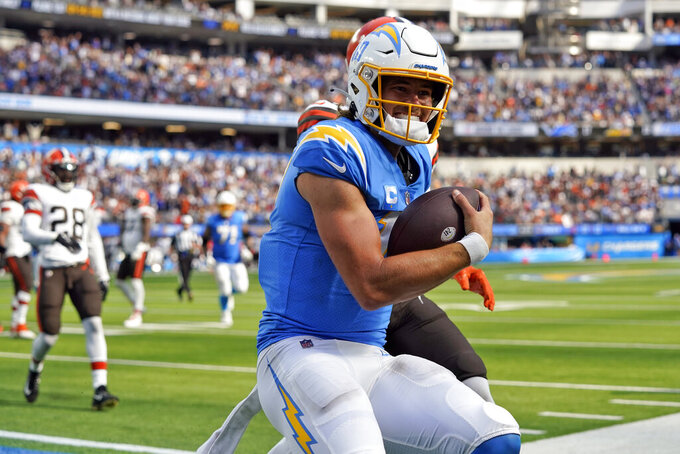 Los Angeles Chargers quarterback Justin Herbert (10) scores a touchdown during the second half of an NFL football game against the Cleveland Browns Sunday, Oct. 10, 2021, in Inglewood, Calif. (AP Photo/Gregory Bull)

Justin Herbert is having a sophomore surge instead of a slump.

The Los Angeles Chargers quarterback continues to add to his accolades after a record-setting first season when he was The Associated Press NFL Offensive Rookie of the Year. Herbert and the Chargers are off to a 4-2 start and tied for the AFC West lead on their bye week.

Operating under a new offense installed by first-year coach Brandon Staley and offensive coordinator Joe Lombardi, Herbert has directed the Chargers to three fourth-quarter comebacks, all against teams that made the playoffs last season.

Despite a 34-6 loss at Baltimore last week, the Chargers' fast start has made Herbert a potential pick for NFL MVP honors.

With two-thirds of the season yet to be played, Lombardi is only concentrating on making sure Herbert remains focused on the immediate tasks at hand.

“Obviously, we’re happy with the way that he’s playing, but we talk all of the time about not getting caught up into that stuff. The more that you can tune out that noise, the better," Lombardi said. “Am I surprised at how well he’s playing? No. We watched last year’s film when we got here, and it was impressive how well he played.”

Herbert set rookie QB records last season for most passing touchdowns. He also has 11 300-yard games in 21 starts, the most by a player his first two years in the league.

Through the first six weeks of the season, he is fourth in the league with 161 completions, sixth in yards (1,771) and tied for sixth with 14 touchdowns.

Drew Brees, who is very familiar with the system Herbert is running because it has a lot of carryover from his days in New Orleans, has been impressed with the way Herbert has been able to quickly take to the offense.

“I felt like he located the ball well. What I mean by that was he threw balls when guys were really covered, and yet he located it on a back shoulder or high and away or, you know. just in places where his guy could get it and the other guy couldn’t. And that’s when you start, that’s when you feel like you’re playing next level,” Brees said.

Staley's faith in Herbert has been evident on fourth downs. Herbert was 5 for 5 when the Chargers went for it the first five weeks before missing on all three attempts against the Ravens. On Oct. 10 against Cleveland, Los Angeles went on fourth down twice and converted on a third-quarter scoring drive when it trailed by two touchdowns.

Herbert isn't the only one thriving in the new offense. Mike Williams leads the AFC with six receiving touchdowns, and is third in receptions (33) and yards (498). Keenan Allen is third in the conference with 39 catches.

Running back Austin Ekeler is fifth in the conference with 598 yards from scrimmage, while tight ends Jared Cook and Donald Parham have combined for four touchdowns.

“It’s always about the next week, no matter how the game goes. It’s always about moving on to the next one," Herbert said. "The running backs have done a great job at pass protection, the linemen have handled all the blitzes and fronts that teams have played against us. The receivers have made plays, and the tight ends, too.”

Even though Herbert said he felt like the game hasn't slowed down yet, the experience of each game has been valuable. After having four turnovers in the first two games, Herbert has only one in the past four.

Herbert and the Chargers have also been patient with taking what the defense gives them. Los Angeles' 13 scoring drives of 10 plays or more are tied for second in the league.

“I think we have played some really good teams. You know, I think the bye comes at a really good time. It allows our guys up front to get their legs back and have a week of rest," Herbert said. "It is enough weeks to watch the film and go back over it because there is a lot of good film. ... There is a lot of learn from, so it is going to be a good teaching lesson for us.”

Staley and the coaching staff have spent most of the week self-scouting. Many thought that the first six games could be the team's toughest stretch of the season with four teams that made the postseason last year. Starting Oct. 31 at home against New England, Los Angeles doesn't face a team currently over .500 until Cincinnati on Dec. 5.

“I think it’s important that we study the Chargers before we start on New England. However you want to look at it. When you really study it in that focused way, you can also assess how we’re using the personnel," Staley said. “We’re going to be really critical about sports performance, too — how we’re training these guys, how we’re practicing. After the bye, where do we need to go? I think that’s really important as you move forward.”