Herbert, Prescott get plenty of work during joint practices 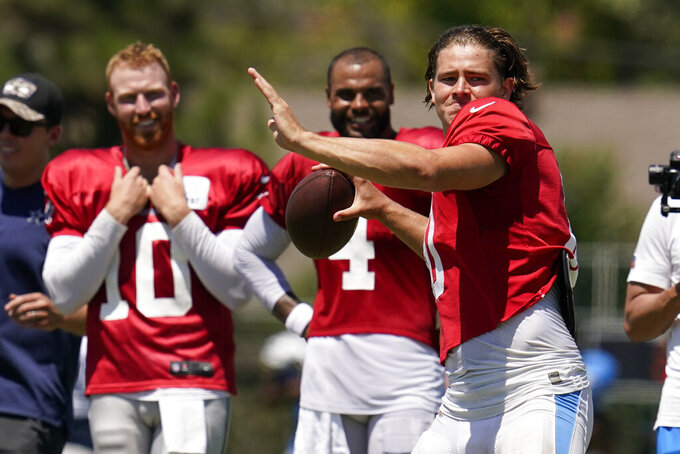 COSTA MESA, Calif. (AP) — Justin Herbert and Dak Prescott will be on the sidelines when the Los Angeles Chargers host the Dallas Cowboys in a preseason game on Saturday night. Both quarterbacks got plenty of snaps, though, the past two days during joint practices.

Herbert and Prescott practiced on adjacent fields at the Jack Hammett Sports Complex, but both took part in a friendly round of target practice after the two-hour session ended.

“I think they ended up winning, but it was fun to just see those guys and hang out with them a little bit,” Herbert said of the side competition between the two QB groups. “I’ve only met him a couple of times, but I really respect him as a player and as a competitor, as well."

Dallas coach Mike McCarthy said early in camp that Prescott could play in the preseason finale Aug. 26 against Seattle. Chargers coach Brandon Staley, though, does not play the majority of his starters in any of the three preseason games.

For Herbert, the joint practices were the closest thing to a dress rehearsal that he is going to get before the Chargers' regular-season opener against the Las Vegas Raiders on Sept. 11.

“It means everything to us. Since we’re not playing in the preseason we need to take advantage of these reps, and we did," Herbert said. “We felt like we really got after it the past couple of days. To go up against a team like that, I think it’s a great learning lesson for us as well, to see a team that flies around like that and a front seven like they have.”

Herbert had a nice completion to Keenan Allen in the back of the end zone but also threw an interception on the first play of a two-minute drill.

Herbert said having to adjust on the fly against another defense as well as seeing how the offensive line held up in pass protection was a bonus.

"That’s a good front line that they have up there. To see those guys fly around up close and personal, I think it’s a great job for us to be able to learn and grow from that and continue to compete against those guys. So, it’s been good for us,” Herbert said.

Prescott did have the highlight play to end Thursday’s practice with a Hail Mary to Dennis Houston, who got position over teammate Simi Fehoko and Chargers cornerback Asante Samuel Jr. to come up with the ball.

“It was definitely good to end on that note, and just being in that situation, end of game, having to go Hail Mary with the clock running," Prescott said. "The guys did a good job of protecting, giving me a lane, letting me buy some time.”

CeeDee Lamb missed both days of practice due to a foot injury, dealing another blow to a diminished Cowboys' wide receiver group already missing Michael Gallup (ACL) and James Washington (foot). Prescott's day featured a lot of handoffs to running backs Ezekiel Elliott and Tony Pollard along with short passes.

While Lamb is expected to return to practice next week, Gallup and Washington are expected to be sidelined when the Cowboys open the season against the Tampa Bay Buccaneers.

Prescott said he isn't getting frustrated over having an inexperienced wide receiver group, but he is hoping to see them make strides the next two weeks.

“This is exactly about that time to work and make other guys step up, take advantage of their opportunity,” he said. "Those guys got to know what I expect from them and how they expect me to throw the ball, so that’s all good things to be worked on.”

Chargers coach Brandon Staley was also pleased with the two practices and noted that the snaps provided more quality for the first units compared to a preseason game because different situations could be practiced.

“You get more plays, and then the types of schemes that you’re playing against you’re seeing their premium scheme, where in the preseason no one is running their premium scheme," he said. “These practices are where it’s at. They may not get into the red zone in a preseason game, you may not have a two-minute situation that kind of expresses itself, so you’re able to control what happens.”