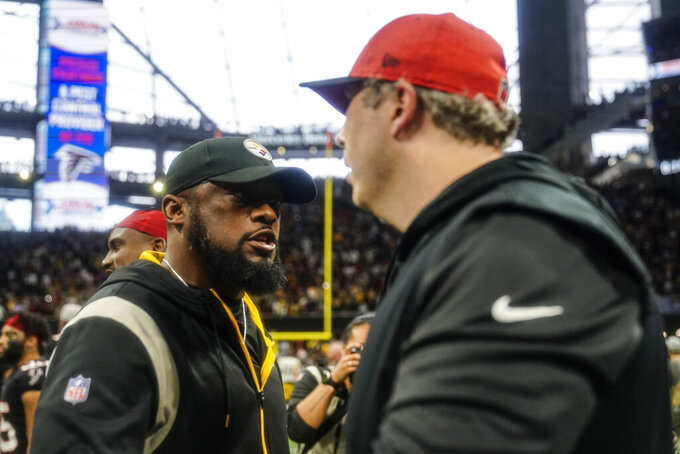 ATLANTA (AP) — Mired in a monthlong slump but somehow still in playoff contention, the Atlanta Falcons are definitely planning changes during their bye week.

Some will be subtle. Perhaps a tweak of a scheme, some different formations, a new play or two.

A switch at quarterback.

Marcus Mariota has taken every snap for the Falcons this season, showing flashes of reviving his floundering career, but it's clear coach Arthur Smith is looking for more from his offense heading into the final quarter of the season.

If Smith decides to bench Mariota, rookie Desmond Ridder is the next man up.

Several media outlets reported that Ridder would get the nod over the final four games, though Smith said he would hold off until Monday to officially announce his decision.

While Atlanta fans have been clamoring to get a look at the third-round pick who led Cincinnati to the College Football Playoff a season ago, Smith is mindful of the gamble he'd be taking by going with an untested player in such a prominent role at this late stage of the year.

Especially when the Falcons, despite losing four of their last five games to drop to 5-8, are just 1 1/2 games behind Tampa Bay (6-6) in the NFC South and will close the regular season at home against the Buccaneers.

Going with Ridder would surely be seen as a sign that the Falcons are giving up on their playoff hopes and focusing more on 2023, which is perhaps the more prudent option.

Four games would give the team a substantial body of work to evaluate if Ridder is a long-term solution at QB, or if the Falcons need to focus on the draft or a possible trade to bring in another player.

“You want to make sure you’re bringing guys along the right way," Smith said. “There have been guys that have gone out there, maybe too early, and it probably altered their career. There have been other guys that you could make a strong argument they probably should have been out there a little bit earlier.”

The Falcons are in the middle of the NFL pack in scoring, ranking 15th at 22.2 points a game, but a strong running game is the primary reason for their offensive success.

Atlanta ranks second in the league at 158.9 yards rushing per game, but the passing game is next-to-last at 155.7 yards. That's not entirely Mariota's fault, since Smith has gone with a ball-control offense in an attempt to cover the Falcons' weaknesses, but that strategy has done little more than keep games close over the past five weeks.

The last four losses have been by a total of 22 points, three of them coming down to the last possession.

Two of those ended with Mariota throwing interceptions, undoubtedly causing Smith to wonder if he's had the right guy at the top of the QB depth chart.

The coach said Ridder has shown plenty of improvement at practice, but he's yet to get on the field in a game that counts.

He wouldn't go into specifics about Ridder, not wanting to tip his hand. Smith said he would wait until players return from their off week to announce any personnel changes.

Mariota said he was not concerned about losing the No. 1 job, which already happened to him once in his career.

“That’s not where my mind is at," he said after the latest setback, a 19-16 loss to the Steelers. “At the end of the day, they have to make a decision that’s best for the team, and whatever happens, happens.”

The No. 2 overall pick by Tennessee in the 2015 draft, Mariota started 61 games over his first 4 1/2 seasons before being benched by the Titans.

In 2020, he moved on to Las Vegas, where he barely played at all for the Raiders over the last two seasons. Mariota got a second chance with the Falcons and Smith, a former Titans assistant who handed him the job after longtime starter Matt Ryan was dealt to the Colts in a cost-cutting move.

Smith stood by Mariota over the first 13 weeks, but that support wavered with the Falcons averaging just 17.6 points in their last five games.

“We'll evaluate everything,” the coach said. “Every job.”

Mariota blamed the Falcons' offensive woes on third down. Over the last five games, Atlanta has converted just a third of the time in those situations (17 of 51) while often facing long yardage.

“It starts on third down,” Mariota said. “If we’re not able to convert third downs, we’re not getting any more plays, we’re not allowing ourselves opportunities to score points. So, it always kind of starts there for the quarterback position.”

While the playoffs weren't really on the Falcons' radar at the beginning of what was supposed to be a rebuilding season, the weakness of the NFC South — where the four teams have a cumulative record of 19-31 — has opened an unexpected door.

The Falcons, whose next game is at division rival New Orleans on Dec. 18, are running out of opportunities to walk through it.

“Unless you literally don’t have a phone ... yeah, you’re aware of it,” Smith said of the playoff possibilities. “We need to get a win. So, whatever we have to do, we have to find a way to try to beat New Orleans down there.”

Even it meant a change at quarterback.