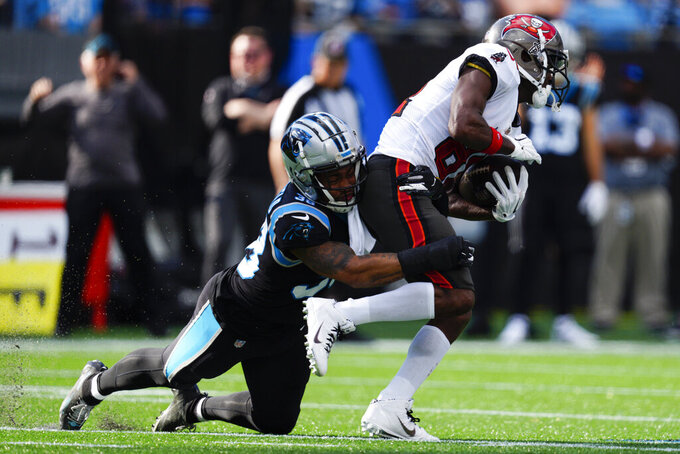 Miami at New Orleans, 8:15 p.m. EST. Ian Book is set to become the fourth starting quarterback for the Saints this season in this matchup of teams that have battled through adversity to reach the fringes of playoff contention in their respective conferences. New Orleans (7-7) has won two straight after a five-game skid, supported by a defense that gave up nine total points in those two games. Book takes over at QB for Taysom Hill and backup Trevor Siemian, both of whom were among at least 15 Saints players testing positive for COVID-19. Miami (7-7) has won six straight following a seven-game slide and has a healthy Tua Tagovailoa at QB. The Dolphins have been less affected by the COVID-19 outbreak sweeping the league, at least this week.

— Joe Burrow, Bengals, threw for a franchise-record 525 yards in Cincinnati's 41-21 win over Baltimore. Burrow was 37 of 46 with four touchdown passes and shattered the record on a 52-yard bomb to Joe Mixon late in the game.

— Dak Prescott, Cowboys, threw four touchdown passes, all in the first half, and finished with 330 yards on 28-of-39 passing before leaving in the third quarter of Dallas' 56-14 rout of Washington.

— Kirk Cousins, Vikings, threw for 315 yards and a touchdown in Minnesota's 30-23 loss to the Los Angeles Rams.

— Josh Johnson, Ravens, went 28 of 40 for 304 yards, two touchdowns and an interception in an emergency start in place of Lamar Jackson (ankle) and Tyler Huntley (COVID-19).

— Rex Burkhead, Texans, rushed for a career-high 149 yards and two touchdowns on 22 carries in Houston's 41-29 win over the Los Angeles Chargers.

— Justin Jackson, Chargers, had 64 yards and two touchdowns on 11 carries and was also Los Angeles' leading receiver with nine catches for 98 yards in a 41-29 loss at Houston.

— Tee Higgins, Bengals, had 12 receptions for a career-high 194 yards and two touchdowns in Cincinnati's 41-21 win over Baltimore.

— Isaiah McKenzie, Bills, had career highs of 11 receptions for 125 yards and a touchdown in Buffalo’s 33-21 win at New England.

— Mark Andrews, Ravens, had 125 yards and a touchdown on eight receptions in Baltimore's loss.

— Cooper Kupp, Rams, had 10 receptions for 109 yards in LA's win over Minnesota.

— Amon-Ra St. Brown, Lions, had nine receptions for 91 yards and a touchdown in Detroit's loss at Atlanta.

— Braxton Berrios, Jets, had a 102-yard kickoff return for a touchdown in New York's 26-21 win over Jacksonville.

— Brandon Powell, Rams, returned a punt 61 yards for a touchdown in LA's 30-23 win over Minnesota.

— Ryan Succop, Buccaneers, was 4 for 4 on field goals and made both his extra points in Tampa Bay’s 32-6 win over Carolina.

— DeMarcus Lawrence, Cowboys, tipped a pass by Washington’s Taylor Heinicke to himself and returned it 40 yards for a touchdown in Dallas’ 56-14 win.

— Linebacker Anthony Barr, Vikings, picked off Matthew Stafford twice, both deep in Rams territory, and the Vikings turned them into 10 points in their 30-23 loss.

— Tavierre Thompson, Texans, had a game-sealing 48-yard interception return for a touchdown in Houston's 41-29 win over the Los Angeles Chargers. Jonathan Owens, who spent most of the season on the Texans’ practice squad and started Sunday because of COVID-19 absences, got his first career interception in the second quarter of a 41-29 win over the Chargers and recovered a fumble in the fourth.

— Alex Singleton, Eagles, returned an interception 29 yards for a touchdown in Philadelphia's 34-10 win over the New York Giants. The linebacker also had 12 tackles.

— Maxx Crosby, Raiders, had a sack, a quarterback hit and two tackles for loss in Las Vegas' 17-13 win over Denver.

Two offensive linemen scored touchdowns in the Jets' 26-21 win over the Jaguars: New York's Conor McDermott on a tackle-eligible reception and Jacksonville's Will Richardson on a fumble recovery in the end zone. According to Elias Sports Bureau records dating to 1950, it was the first time multiple offensive linemen scored TDs in the same game. ... Minnesota’s Justin Jefferson had eight catches for 116 yards in the Vikings’ 30-23 loss to the Los Angeles Rams. He passed fellow LSU alum and pal Odell Beckham Jr. for most receiving yards in a player’s first two seasons (2,851). Beckham had 2,755. ... The Rams’ Cooper Kupp had 10 catches for 109 yards to become the first player with at least 90 receiving yards in 14 games of a single season. Antonio Brown (2014) and Michael Irvin (1995) did so in 13 games. Kupp's 132 catches this season are the fifth most in NFL history and with two games left, he has a shot at Michael Thomas' record of 149 in 2019, when the season was 16 games. ... The Tampa Bay Buccaneers clinched their first NFC South title since 2007. Tampa Bay won the Super Bowl last season as a wild card. ... Buffalo's Josh Allen became the first player in NFL history with at least 100 touchdown passes and 20 rushing TDs in his first four seasons. ... Dallas' Trevon Diggs had his 11th interception, the most in a season by any player since the Cowboys' Everson Walls in 1981. The total also ties a Cowboys record.

The Kansas City Chiefs clinched their sixth straight AFC West title with a 36-10 win over Pittsburgh, their eighth straight victory since starting the season 3-4. ... The Steelers became the first team in NFL history to trail by at least 23 points at halftime in three straight road games, and they have failed to score a touchdown in the first half of five straight games for the first time since 1940. ... Atlanta’s Kyle Pitts has 949 receiving yards this season, the second most in history by a rookie tight end behind Mike Ditka’s 1,076 in 1961. ... The Los Angeles Chargers' Keenan Allen has 96 catches this season and became the second player with at least 95 receptions in five consecutive seasons, joining Antonio Brown (six straight from 2013-18). ... The Seahawks (5-10) lost 10 games in a season for the first time under coach Pete Carroll, who took over in 2010. ... In its 56-14 win over Washington, Dallas scored its most points, playoffs included, since a 59-14 victory over San Francisco. Washington's loss was the most lopsided by either team in a rivalry played 123 times.

Cincinnati’s Joe Burrow threw for 525 yards in the Cincinnati Bengals’ 41-21 win over the Baltimore Ravens, the fourth most in an NFL game. Norm Van Brocklin holds the record of 554 yards for the Los Angeles Rams on Sept. 28, 1951. Since the merger, only Warren Moon and Matt Schaub (both 527 yards) have topped Burrow’s total. The Ravens came into the game with the league's second-worst pass defense and an injury-ravaged secondary, and the Bengals attacked through the air for the entire game, with Burrow securing the franchise record on a 52-yard bomb to Joe Mixon after the two-minute warning. Boomer Esiason (522) previously had the most passing yards by a Bengal.

Tampa Bay Buccaneers receiver Antonio Brown played for the first time since Week 6 at Philadelphia. He had been sidelined by an ankle injury and was suspended for three games for misrepresenting his COVID-19 vaccination status. With Mike Evans and Chris Godwin out because of injuries, Tom Brady targeted Brown early and often, and the mercurial veteran finished with 10 catches for 101 yards as Brady threw to him 15 times.

Carolina fans are fed up with Matt Rhule, chanting for the coach to be fired as the Panthers were blown out 32-6 by Tampa Bay to fall to 5-10. Rhule has lost double-digit games in both of his seasons, and there was a hint of desperation in his strategy of rotating quarterbacks Cam Newton and Sam Darnold on Sunday.

Rhule insisted after the game that the team is heading in the right direction, but it isn't showing on the field. It remains to be seen whether Panthers owner David Tepper will be patient enough for Rhule's process to bear fruit.

“There is a process that is happening underneath and everyone is like, ‘It’s not working Matt, it’s not working Matt.’ But when I see all of the good things that are happening, I think it is,” said Rhule, who is in the second year of a seven-year, $60 million contract.

The Jacksonville Jaguars lost their seventh straight overall and fell to 0-2 since coach Urban Meyer was fired, but this defeat didn't feel like the others. The Jags were competitive to the final minute of a 26-21 loss to the New York Jets, falling short on an incomplete pass by Trevor Lawrence on fourth-and-goal.

“I can honestly say this game has been different,” cornerback Shaquill Griffin said. “I was telling them watching Trevor and the offense drive down that field, I’m looking around at those faces, that faith, that belief and hope that ‘We really can do this.’”

Another silver lining for the Jaguars: They are in position for the top pick in the draft for the second straight year.

Buffalo Bills left guard Ike Boettger was carted off the field with a ruptured Achilles tendon in a win against New England ... Jacksonville running back James Robinson left the Jaguars’ loss to the New York Jets with a torn Achilles tendon. Jacksonville also lost linebacker Dakota Allen to a shoulder injury and defensive end/linebacker K'Lavon Chaisson to an ankle injury. ... Jets center Connor McGovern and tight end Trevon Wesco had knee injuries. ... Clyde Edwards-Helaire had a touchdown run for Kansas City in its win over Pittsburgh before leaving early in the second half with a collarbone injury. Chiefs safety Tyrann Mathieu left in the fourth quarter with a quad injury. He had been hobbled while in coverage earlier in the third quarter. ... Baltimore Ravens cornerback Anthony Averett suffered a chest injury in the first half against Cincinnati and did not return. ... Bengals defensive end Cam Sample left Cincinnati's win with a left hamstring injury. ... Eagles running back Miles Sanders suffered a hand injury in a win over the New York Giants. ... Vikings receiver Adam Thielen returned from a two-game absence with three catches for 40 yards against the Rams, but he aggravated his ankle injury twice and barely played in the second half. ... For the Rams, linebacker Ernest Jones (ankle), center Brian Allen (knee), nose tackle Greg Gaines (hand) and running back Darrell Henderson (knee) were hurt. ... Tampa Bay linebacker Shaquil Barrett suffered an MCL sprain against Carolina, while Panthers cornerback Stephon Gilmore left with a groin injury. ... In the Texas' win over the Chargers, Los Angeles linebacker Drue Tranquill (leg) and Houston receiver Phillip Dorsett (foot) were hurt. ... In Detroit's loss at Atlanta, Lions running back Jason Cabinda suffered a right knee injury and tight end Shane Zylstra was carted off with an apparent left knee injury.

“I can’t control what people write, how people try to frame me or bring me down. Life is about persevering and doing what’s right. ... I’m standing here humble and grateful and thankful and excited being around a great win with my teammates.” — Tampa Bay receiver Antonio Brown while refusing to go into detail about a three-game suspension for misrepresenting his COVID-19 vaccination status.

“You know, we haven’t done much on the road. We’re taking too long to warm up to the environment and it’s been an issue.” — Steelers coach Mike Tomlin after Pittsburgh lost 36-10 at Kansas City.