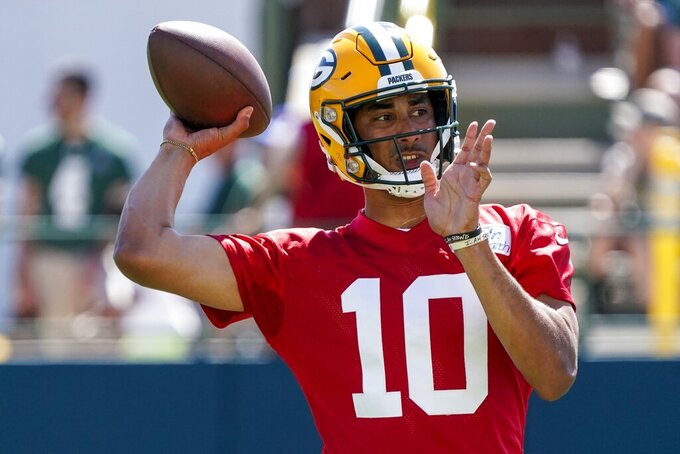 The 2020 first-round pick from Utah State has looked more comfortable in training camp as he enters his third season. Love has a chance to show how far he’s come Friday as he starts the Packers’ preseason opener at San Francisco.

“I think I definitely have a little extra motivation this camp,” Love said. “Taking these reps, I know this is kind of my time that I get a lot of reps in preseason coming up.”

Love has drawn much scrutiny ever since the Packers drafted him, due largely to the star power of the guy in front of him on the depth chart.

The selection of Love raised speculation about the future of Rodgers, who acknowledged he was surprised by the pick and wasn’t informed about it beforehand. Rodgers has produced MVP seasons each of the two years since and signed a contract extension in March.

Rodgers says he doesn’t know how much longer he will play, but he expects to remain a Packer for the rest of his career. Now it’s up to Love to show he’s a clear choice as Rodgers’ eventual successor.

The situation isn’t all that different from what Rodgers faced at the start of his career. Rodgers, a first-round pick in 2005, backed up Hall of Famer Brett Favre for three seasons and took over in 2008 as Favre briefly retired before changing his mind and getting traded to the New York Jets.

“The tracks are looking more similar by the day,” Rodgers said. “Him being in his third year and me waiting behind Brett for three years. Something clicks in at some point and the game slows down and you make the plays that you know you’re capable of making.”

Rodgers didn’t play at all in the 2021 preseason and won’t play Friday. Packers coach Matt LaFleur hasn’t said yet whether Rodgers will get any preseason snaps.

That gives Love an opportunity to show he’s better than his 2021 results indicated.

Love made his first career start at Kansas City last year after Rodgers’ positive COVID-19 test and went 19 of 34 for 190 yards with a touchdown and an interception as the Packers lost 13-7. The Packers didn’t score until the last five minutes of the game.

He played the second half of the Packers’ regular-season finale and went 10 of 17 for 134 yards with one touchdown and two interceptions in a 37-30 loss at Detroit.

Love says he wants to throw better while under pressure. He cited a play from the final series of that Lions game, when pressure caused Love to throw an incomplete pass to an open Equanimeous St. Brown on a deep route.

“That’s something I’ve tried to focus on coming off last year,” Love said. “I had a couple plays where I wish I would have thrown a better ball under pressure. I just think I’ve been taking these moments, just trying to stay in the pocket and deliver those throws — be able to focus on those throws.”

The Packers like what they’ve seen from Love. Although the defense generally has outperformed the offense in training camp, Love has looked more assured.

“I think he’s much more in rhythm,” LaFleur said. “I think there’s much more decisiveness, I think you see it in his footwork.”

Circumstances out of his control curtailed Love’s early development.

The pandemic prevented him from having a typical offseason or any kind of preseason his rookie year. He injured his shoulder in the Packers’ preseason opener last year and didn’t play the following week.

But he finally got more opportunities last year.

“As much as anything this year, you’ve seen the fundamentals really start to come together,” Rodgers said. “Year three, (year) two to three is always an interesting year for development from a quarterback. I know I took a big jump, 1 to 2 and 2 to 3.”

NOTES: The Packers signed running back Dexter Williams and safety Micah Abernathy. Williams played seven games for Green Bay from 2019-20 but was cut before the start of the 2021 season. ... The Packers released incumbent long snapper Steven Wirtel as well as receiver Osirus Mitchell. The release of Wirtel leaves Jack Coco as the only long snapper currently on the roster.