Rams' Stafford fired up to realize his Super Bowl dreams 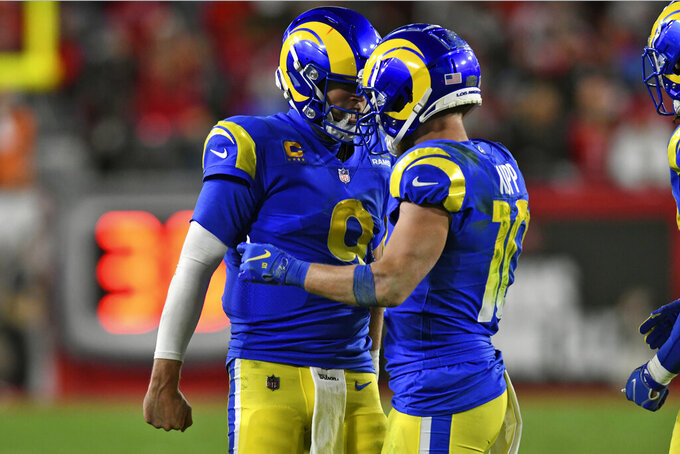 Los Angeles Rams quarterback Matthew Stafford (9) celebrates with wide receiver Cooper Kupp (10) after his reception against the Tampa Bay Buccaneers during the second half of an NFL divisional round playoff football game Sunday, Jan. 23, 2022, in Tampa, Fla. (AP Photo/Jason Behnken)

LOS ANGELES (AP) — Matthew Stafford usually mutes his emotions in public, whether he’s under center or behind a bank of microphones. He had a measure of California cool long before he moved to the West Coast last year to pursue his biggest football dreams before it was too late.

That's why the rest of the Los Angeles Rams were joyously surprised last Sunday when Stafford let it all out.

After the quarterback completed a majestic 44-yard pass to Cooper Kupp to set up the field goal that sent the Rams to the NFC championship game, Stafford spiked the ball to stop the clock — and then he spiked it again in a frenzied, screaming celebration while he bounced off the field.

“All the guys on the sideline were like, ‘Man, you were in a dark place,’” Stafford said. “I said, ‘Sometimes, you just have to go to those places and make some plays happen.’ I was enjoying the moment. In my mind, I live for those kind of moments. I would have loved to have been taking a knee up three scores, but it’s a whole lot more fun when you’ve got to make a play like that to win the game and just steal somebody’s soul."

Bold, provocative words from a player who isn't prone to grand pronouncements — or even interesting responses to questions during most game weeks.

But everything about Stafford has been focused and amplified while he chases his first Super Bowl ring. With his best chance yet to reach every player's ultimate goal, Stafford has been near his absolute best.

After a strong regular season colored by late-season turnover problems, Stafford has thrown for 570 yards and completed 74.5% of his passes without an interception while earning the first two playoff victories of his career. He has thrown four TD passes and rushed for two more scores while showcasing a poise worthy of the game's best quarterbacks.

His gutsy completion to Kupp — while getting clobbered by Ndamukong Suh, no less — and his subsequent celebration were the punctuation on a clear, declarative statement of Stafford's desire.

“It was kind of Kobe-esque,” Rams coach Sean McVay said, evoking the ultimate measure of sports passion in Los Angeles.

“He’s very poised in front of the media and he’s poised during games, but he’s got a lot of stuff to him that I think people wouldn’t realize,” McVay added. “And that’s exactly what you want from your quarterback. I love that fire that he has.”

Stafford's first season with the Rams (14-5) has been the most successful of his 13-year NFL career, but he leads Los Angeles against the San Francisco 49ers (12-7) on Sunday knowing they'll probably need another superlative effort from him to beat an opponent that has owned the Rams for three years.

“This is an unbelievable opportunity,” Stafford said Wednesday. “It’s a whole lot of fun to be doing what we’re doing, playing football when we’re one of the last four teams left.”

Stafford left the only NFL team he'd ever known and moved his four children across the country last spring because he could feel time marching past him. After a dozen seasons in Detroit, he had only three playoff losses to show for a prolific career on a long series of disappointing teams.

The Rams have provided him with the tools to succeed, and he has improved upon them. For instance, Kupp became the most productive receiver in football when partnered with Stafford, just as Calvin Johnson did regularly during his concurrent career with Stafford in Detroit.

McVay is an innovative, aggressive play-caller whose style is suited to Stafford's strong arm and confident decision-making. Their partnership didn't always work perfectly in the regular season, but the biggest setback for LA's offense in the postseason has been four turnovers by Stafford's teammates against Tampa Bay.

Everything is in place to face the 49ers, who harassed Stafford with a four-man rush in both meetings this season. Stafford excels against blitzes because of his decision-making prowess, but San Francisco frequently drops seven men into coverage and still gets pressure.

Stafford knows all of this, and he is prepared to try again.

“There aren’t a ton of varied looks," he said. "They do a great job stunting their defensive line and moving guys after the snap. ... It’s about execution for us, guys doing the right thing play in and play out, and when we’re getting the opportunities to hit big plays, we have to hit them.”

Stafford has great teammates all around him in Los Angeles, both in the Rams' locker room and at home. His wife, Kelly, reveals more about her husband on her weekly podcast than Stafford himself ever discusses publicly — and this week, she announced her intention to buy championship game tickets for a significant number of Rams fans who have been priced out of SoFi Stadium.

Stafford only needs to focus on his work, and he seems determined to have no regrets next month.

“I’m just trying to make sure that I’m in the present, being kind of where my feet are planted, and taking care of business here,” Stafford said.

NOTES: LT Andrew Whitworth (knee) and S Taylor Rapp (concussion) are on track to return Sunday, McVay said. ... LT Joseph Noteboom would have missed practice with his pectoral injury if the Rams had held more than a walkthrough. DT Greg Gaines (toe) and WR Van Jefferson (knee) are also starting the week slowly.