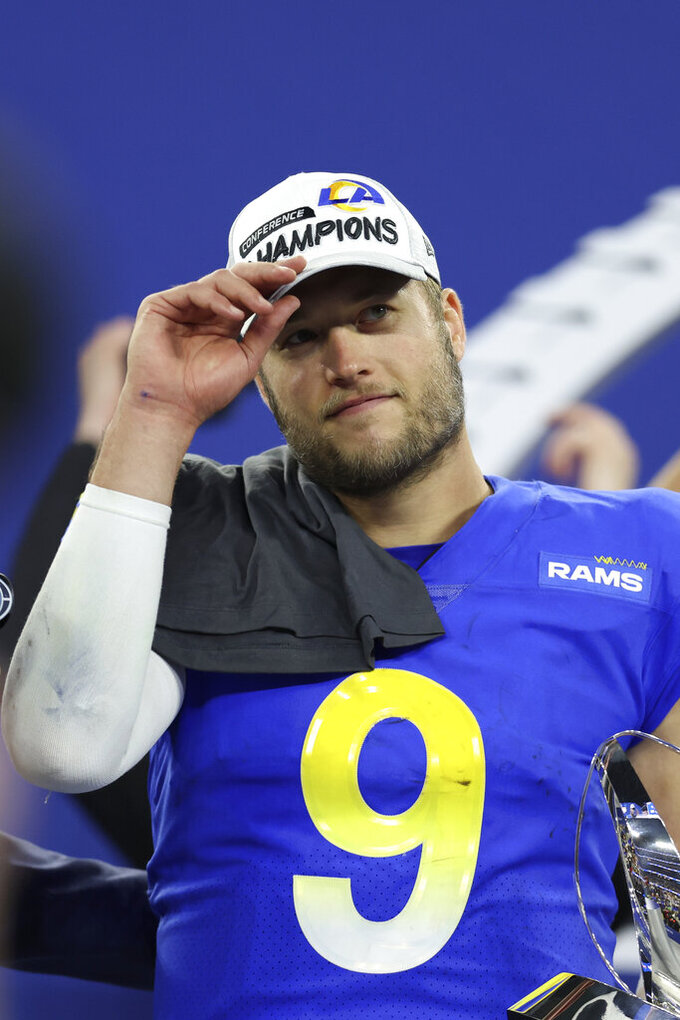 LOS ANGELES (AP) — Matthew Stafford got a call this week from a childhood friend who knows a little something about waiting a long time to win his first championship.

Clayton Kershaw is hoping to be at SoFi Stadium next Sunday when Stafford leads the Los Angeles Rams (15-5) in search of the same long-sought title that Kershaw finally won with the Dodgers in 2020.

“He's excited for me, which I appreciated,” Stafford said with a grin Thursday. “We didn't get too deep into what it's like, what to expect. His job is so much different than mine. But he's just excited. It's just cool to be doing it in the same city as him."

Kershaw and Stafford grew up together in the Dallas area and went to Highland Park High School, where Kershaw was Stafford's football center for a time. Nearly 15 years after their lives and careers diverged, Stafford and Kershaw were brought back together in Los Angeles in 2021.

And Stafford is now hoping to follow in the footsteps of Kershaw, who also raised his first championship trophy in his 30s after a long career spent working toward the goal.

Stafford leads the Rams against the Cincinnati Bengals at SoFi Stadium with the chance to complete one of the most impressive first-year runs by a quarterback in recent NFL history. After a dozen years in Detroit, Stafford has been the solution to most of the Rams' offensive problems since he landed last spring with Sean McVay, Cooper Kupp and the teammates who have ridden his steady, effective play to their second Super Bowl appearance in four seasons.

“He’s elevated everybody around him,” McVay said after last Sunday's win over San Francisco in the NFC championship game. “He’s made me a better coach. He’s made his teammates better. He’s such a great person. I think you guys know from getting a chance to interact with him. If you don’t root for this guy, something’s wrong with you.”

This Super Bowl berth is not only the validation of Stafford’s decision to leave Detroit, but also the validation of the decision by McVay and general manager Les Snead to perform the elaborate machinations necessary to replace Jared Goff, who hadn’t even started the wildly lucrative four-year contract extension given to him by the Rams.

Stafford has passed for 905 yards in the Rams' first three playoff games. If he gets 315 yards in the Super Bowl, he will pass Eli Manning's single-season playoff record from 2011.

Not bad for a 33-year-old quarterback who had never won a playoff game before last month.

Kupp has turned into the most productive receiver in football while catching throws from Stafford — just as Calvin Johnson did when he was teamed with Stafford in Detroit. Kupp and Stafford have cemented their bond with their now-famous Breakfast Club — which is really just Kupp and Stafford watching film each morning at the Rams' training complex while eating breakfast.

Stafford has maintained a steady focus and sturdy leadership throughout the Rams' season, including a winless November in which Stafford threw a spate of interceptions that derailed his MVP candidacy.

The quarterback has taken advantage of an opportunity that looked like it might never arrive. Before he joined the Rams, the biggest single stage of his football career was arguably Georgia’s victory over Hawaii in the 2008 Sugar Bowl to complete an 11-2 season.

Stafford was humbled this week when he was reminded that his last chance to play for a championship was back at Highland Park in 2005.

“Man, I was young,” Stafford said with a smile. “Didn't know a whole lot. But we ran the rock great that day. Didn't throw a touchdown pass. We won 59-0. So we ran it good, but I don't spend too much time thinking about that. I think (the Super Bowl) is going to be a little bit different stage, but at the same time, just go out there and have fun and enjoy the moment. I'm going to enjoy Sunday in a couple of weeks.”

Despite his playoff inexperience, Stafford is quickly figuring out how to navigate the logistics of playing into February. The handling of ticket requests has been taken over by his wife, Kelly, while Stafford strives to focus solely on football.

Even if Kershaw doesn't end up being among the group in the stands at SoFi, Stafford will still be supported by friends and family who know how far he traveled to this stage in Southern California.

“I've got a bunch of high school teammates and buddies that have come to a bunch of the playoff games and will come to this one as well,” Stafford said. “They've moved on in their lives from the game of football, and I'm still lucky enough to get to do it. It's pretty special.”