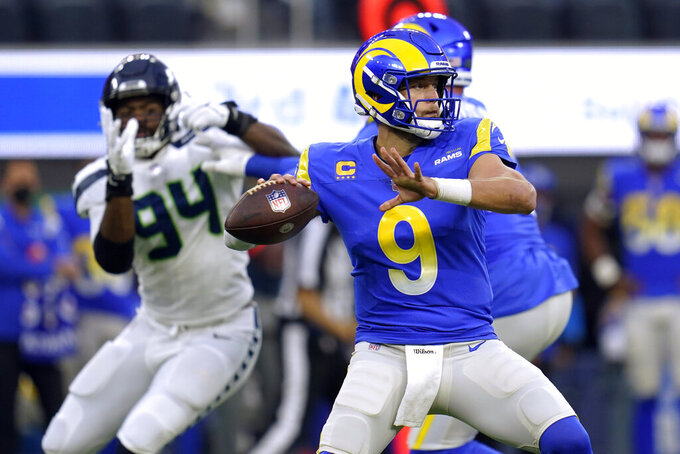 Los Angeles Rams quarterback Matthew Stafford looks for a receiver during the first half of the team's NFL football game against the Seattle Seahawks on Tuesday, Dec. 21, 2021, in Inglewood, Calif. (AP Photo/Ashley Landis)

BETTING LINE: Rams by 3, according to FanDuel SportsBook.

TURNOVER DIFFERENTIAL: Rams plus-5; Vikings plus-7.

RAMS PLAYER TO WATCH: CB Jalen Ramsey returned from a week on the COVID-19 reserve list against Seattle with another do-everything game that reminded everyone of his primacy in the Los Angeles defense. Ramsey's versatility covers gaps in the Rams' spotty pass defense and frees up their pass rushers. Ramsey is their second-leading tackler, and his three interceptions are one shy of his career high. The Rams are a much better team with Ramsey on the field, and he is fairly well-rested heading to Minnesota.

VIKINGS PLAYER TO WATCH: QB Kirk Cousins is just 26 for 55 (47.3%) in the last two games, both Vikings wins, with half of his season interception total (six). The pass rush, particularly inside, by the Bears threw Cousins off and he can expect more of the same from Rams star DT Aaron Donald. Cousins is still second in the NFL this year in interception percentage, third in sack percentage, fourth in passer rating, seventh in passing yards and seventh in passing touchdowns this year.

KEY MATCHUP: Vikings DBs vs. Rams WR Cooper Kupp. With Kupp frequently in the slot, nickel CB Mackensie Alexander will be have a heavy responsibility to keep the NFL's leading receiver in relative check. Kupp will line up all over, including in the backfield, so the entire secondary will have to be on high alert for the fifth-year star who has already set the single-season franchise record for receptions (122). Kupp has 388 yards and four TDs in the last three games.

KEY INJURIES: After two weeks of COVID-19 turmoil, the Rams got back RT Rob Havenstein, backup LB Ogbo Okoronkwo and DB Terrell Burgess on Wednesday. They're hoping to get back leading tackler Jordan Fuller and TE Tyler Higbee this week as well, although they might not know until kickoff. ... Other than their virus problems, the Rams have few lingering injuries. WR Robert Woods (knee) is out for the rest of the season. ... The Vikings have placed standout RB Dalvin Cook on the COVID-19 list but also activated WR Dan Chisena from it. ... Vikings WR Adam Thielen (ankle) has missed the last two games but is aiming for a return.. ... The Vikings returned backup RB Alexander Mattison and PR/ WR Dede Westbrook from the COVID-19 reserve list this week. ... Vikings DE Danielle Hunter (pectoral) is done for the season. DE Everson Griffen is out indefinitely for mental health treatment.

SERIES NOTES: The Rams had 556 yards in the last matchup with the Vikings, the second-highest total allowed in eight seasons under coach Mike Zimmer. ... The last win by the Rams in Minnesota was in 2006 when they were in St. Louis. The Vikings won home games in this series in 2015 and 2017. ... The two franchises have met seven times in the playoffs, with the Vikings winning five.

STATS AND STUFF: The Rams have won three straight games. They're tied with Arizona for first place in the NFC West, with the Cardinals currently holding the tiebreaker advantage on a better division record. ... Kupp set the Rams' single-season receptions record with his 120th catch on Tuesday, surpassing every receiver from the Greatest Show on Turf teams from St. Louis. Kupp has 1,625 receiving yards with three games to play, putting him in range of Calvin Johnson's NFL-record 1,964 yards in a 16-game season. To break Megatron's mark in 16 games, Kupp would need to average 170 receiving yards in each of the Rams' next two games. ... Matthew Stafford is second in the NFL in TD passes (35) and passer rating (108.2), third in yards passing (4,142) and fourth in yards per attempt (8.3). ... LB Von Miller finally got his first sack for the Rams last week, but he has six tackles for loss and is looking increasingly comfortable in his new defense. ... The Vikings control a three-way tie for the third and final NFC wild-card spot, with a current tiebreaker edge over Philadelphia and New Orleans. ... Cook has his third straight 1,000-yard rushing season and is the only player in the NFL with 1,200-plus yards from scrimmage in each of the last three years. ... Vikings WR Justin Jefferson is second in the league in receiving yards (1,335) behind Kupp. With 21 more yards, Jefferson will set the NFL record for most receiving yards in a player's first two seasons. ... Vikings DE D.J. Wonnum had a career-high three sacks in the game against the Bears. ... Vikings CB Patrick Peterson has 15 passes defensed and seven interceptions in 20 career games against the Rams.

FANTASY TIP: Rams RB Sony Michel has 292 rushing yards and one TD, five receptions for 31 yards in three games since taking over as the starter when Darrell Henderson was hurt. Henderson returned against the Seahawks and had six carries for 23 yards, but Henderson took a handful of hard hits, and Michel was clearly a more effective runner.