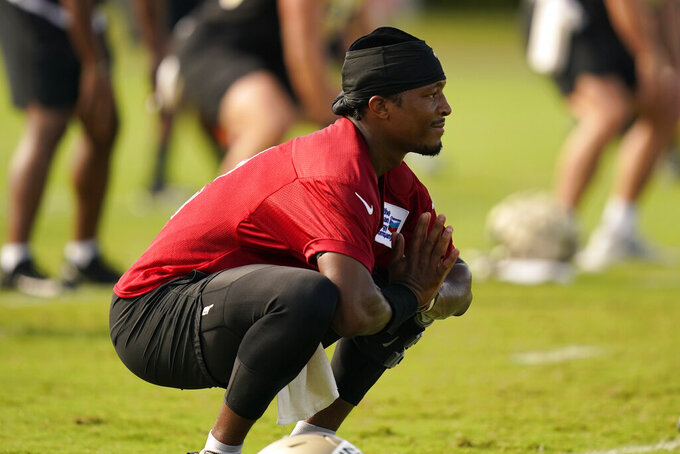 "He tweaked his foot a little bit," Allen said after practice.

Winston did not receive treatment on the field and continued to practice for a period after he'd first felt discomfort before deciding to walk to the training room.

Allen said Winston was rolling out during a seven-on-seven drill when the quarterback "kind of felt it tweaked a little bit, so he wanted to go in and get it evaluated.”

Winston is New Orleans' projected starter despite tearing ligaments in his left knee in a game against Tampa Bay last Oct. 31.

He spent the second half of last season and much of this past offseason rehabilitating from reconstructive surgery and in March signed a two-year extension worth up to $28 million. Winston was limited during on-field work during the offseason, but has participated more fully in full-team drills since training camp practices began on July 27. His highlights have included long, accurate touchdown passes to Deonte Harty and rookie Chris Olave when the speedy receivers got behind the secondary.

Winston, a 2013 Heisman Trophy winner and 2015 top overall draft choice by Tampa Bay, arrived in New Orleans as a free agent in 2020 with a mercurial reputation.

He said he initially chose to sign with New Orleans to study under then-coach Sean Payton and star QB Drew Brees, and Winston won the starting job in 2021, the first season after Brees' retirement.

The Saints went 5-2 in games Winston started, and the quarterback made strides in his TD-to-interception differential, passing for 14 scores while throwing just three picks. But the Saints did not rely heavily on the passing game last season, ranking last in the NFL in yards passing per game. Winston averaged 167 yards passing, but his seventh start was cut short by his season-ending injury early in the second quarter.