Seahawks, Chargers to meet looking for another key win 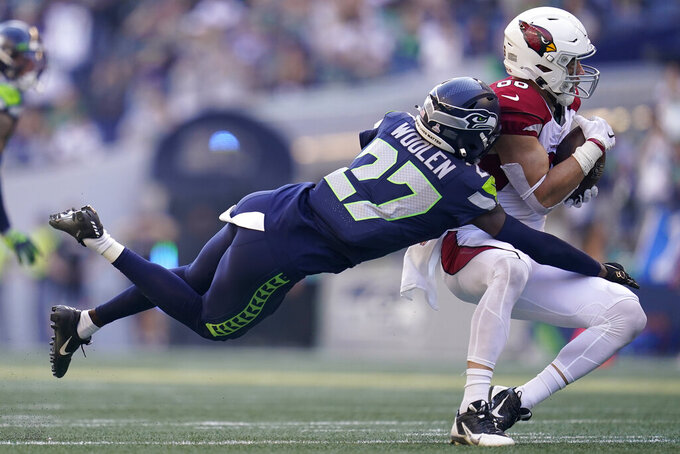 BETTING LINE: Chargers by 5 1/2, according to FanDuel Sportsbook.

SEAHAWKS PLAYER TO WATCH: Rookie CB Tariq Woolen was the NFC defensive player of the week after his fourth straight game with an interception. Woolen, a fifth-round pick, has been a revelation for the Seahawks and can become just the second rookie since the merger to have an interception in five straight games if he can grab another against the Chargers.

CHARGERS PLAYER TO WATCH: WR Mike Williams had two receptions for 17 yards against Denver, including a 9-yard catch to set up the winning field goal in overtime. In three home games, he has five receptions for 42 yards and one touchdown, compared to 25 grabs for 367 yards and a score in three road games.

KEY MATCHUP: Seahawks WR DK Metcalf vs. Chargers CB J.C. Jackson. Following a strong three-game stretch where he had 17 receptions for 301 yards and two touchdowns, Metcalf caught two of seven targets for 34 yards against Arizona in his least productive outing of the season. Jackson’s Week 6 was even worse as the $82.5 million free-agent signing was benched at halftime for poor play. Coach Brandon Staley said Jackson, who has one pass defense and no interceptions in four games, will be back in the starting lineup this week. Whomever comes back better should go a long way in helping his team pick up the win.

KEY INJURIES: Seattle is hopeful DT Al Woods (knee) will return after missing last week’s game. Less certain is whether WR Penny Hart (hamstring) and G Gabe Jackson (knee/hip) will be available. Both missed last week. ... With an open week ahead, Chargers WR Keenan Allen (hamstring) could sit out his sixth straight game with an eye toward returning against Atlanta in Week 9. ... WR Joshua Palmer is in concussion protocol. ... K Dustin Hopkins (hamstring) will miss up to four weeks.

SERIES NOTES: Los Angeles has won three of the past four in the series. ... This will be Seattle’s first road game against the Chargers since they moved to Los Angeles in 2017. ... The Seahawks and Chargers are playing for just the fourth time since 2007.

STATS AND STUFF: QB Geno Smith still leads the league in completion rate (73.4%). Smith threw for only 197 yards last week but added another 48 yards rushing. ... Rookie RB Kenneth Walker III rushed for a season-high 97 yards and a touchdown against the Cardinals. It was his second straight week with a TD run after having a 69-yard touchdown against New Orleans. ... TE Noah Fant led the Seahawks with six receptions last week. ... WR Tyler Lockett has at least five receptions in each of Seattle’s past five road games. ... OLB Uchenna Nwosu is facing his former team for the first time. Nwosu, who spent his first four seasons with the Chargers, had one of Seattle’s six sacks last week vs. Arizona. All six came from different players. ... LB Jordyn Brooks has had at least nine tackles in 15 straight games going back to last season. That’s the longest streak by any defensive player since 2000. ... Rookie CB Coby Bryant leads the league with four forced fumbles. ... Chargers RB Austin Ekeler is the second player in NFL history with at least 25 touchdowns rushing and receiving in his first six seasons, joining Hall of Famer Lenny Moore of the Baltimore Colts. ... Los Angeles has not allowed more than 262 net yards passing this season. They have held 17 of their past 18 opponents under 300 net yards passing. ... QB Justin Herbert averaged 4.18 yards per pass attempt against the Broncos, his lowest mark in a win and second-worst in his career. He averaged 3.94 yards per attempt in a 45-0 loss to New England as a rookie in 2020. ... The Chargers are trying to win four straight games for the first time since weeks 14-17 of the 2020 season. … LB Drue Tranquill had two sacks against Denver. He had 1 1/2 in his first 35 games. ... The Chargers offensive line has allowed sacks on 2.7% of drop-backs, the best rate in the NFL. Their seven sacks allowed is tied with Detroit for fewest in the league.

FANTASY TIP: Ekeler had a season-high 10 receptions on Monday night and should continue to be heavily featured in the passing game against Seattle. Versatile backs such as Denver’s Javonte Williams (11 receptions for 65 yards) and New Orleans’ Alvin Kamara (six receptions for 91 yards) have had success attacking the Seahawks coming out of the backfield.