Steelers, Chargers each looking to bounce back Sunday night 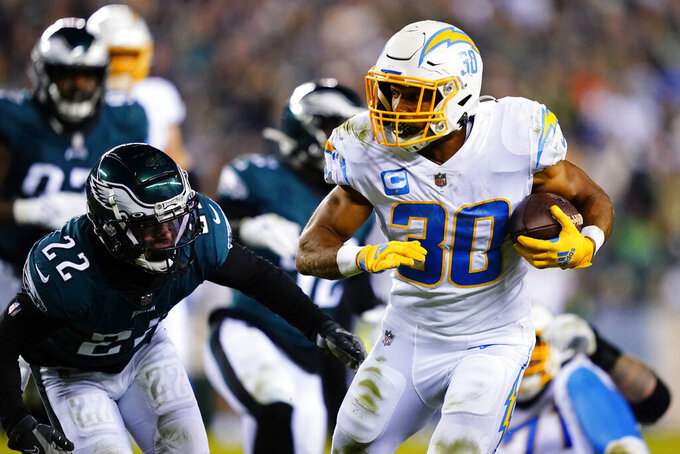 Los Angeles Chargers running back Austin Ekeler (30) runs with the ball past Philadelphia Eagles safety Marcus Epps (22) during the second half of an NFL football game Sunday, Nov. 7, 2021, in Philadelphia. (AP Photo/Matt Slocum)

BETTING LINE: Chargers by 5 1/2, according to FanDuel SportsBook.

TURNOVER DIFFERENTIAL: Steelers minus-3; Chargers plus-2.

STEELERS PLAYER TO WATCH: QB Ben Roethlisberger. The 39-year-old will start after sitting out last weekend's 16-16 tie with Detroit following a positive COVID-19 test. Roethlisberger did not practice during the week but participated in team meetings virtually. A year ago, Roethlisberger missed a week of practice due to COVID-19 contact tracing, started anyway and ended up throwing for 333 yards and four touchdowns in a win over Cincinnati.

CHARGERS PLAYER TO WATCH: QB Justin Herbert. It was another frustrating showing for Herbert against Minnesota, completing just two passes longer than 20 yards. He was 20 for 34 for 195 yards with one touchdown and one interception. The Steelers know how to rush the passer, getting home at the fourth-best rate in football (8.8%), so Herbert will have to be patient against a secondary that should be trying to take away the deep ball.

KEY MATCHUP: Steelers RB Najee Harris vs. Chargers DL Linval Joseph. Just when Los Angeles showed glimpses of improvement stopping the run, limiting Minnesota to 103 yards that came mostly from volume of attempts, it could face the rookie rusher from Alabama with interior lineman Jerry Tillery on the COVID-19 list. Joseph must be stout at the point of attack to limit Harris, who is coming off his second 100-yard game. Even with Roethlisberger behind center, Pittsburgh will want a heavy dose of Harris to dictate the pace of play.

KEY INJURIES: Roethlisberger was cleared to return from the COVID-19 list on Saturday morning. … Steelers LB T.J. Watt (hip/knee), CB Joe Haden (foot) and LG Kevin Dotson (ankle) will not play. … Pittsburgh S Minkah Fitzpatrick isn’t expected to play after being placed on the COVID-19 list. ... The Steelers will have WR Chase Claypool back after he sat out last weekend due to a toe injury. ... Chargers CB Michael Davis (hamstring) and S Nasir Adderley (ankle) are on track to return. Davis missed the past two games, while Adderley sat out last week. … LB Joey Bosa was cleared from the COVID-19 list on Saturday.

SERIES NOTES: The Steelers and Chargers have split the past four meetings, with the road team winning in each instance. … After losing to the Chargers in the 1995 AFC championship game, Pittsburgh won eight of the next nine in the series between 1995 and 2009. … Pittsburgh's last two road wins against the Chargers have come with backup quarterbacks starting in place of Roethlisberger. Mike Vick won in San Diego in 2015 and rookie undrafted free agent Devlin “Duck” Hodges got the victory in Los Angeles in 2019 with Roethlisberger lost for the season with right elbow surgery. ... The Steelers are 9-6 on the road against the Chargers. … Los Angeles has won two of three playoff games against Pittsburgh. In addition to the memorable 17-13 win that sent the then-San Diego Chargers to their only Super Bowl, they won 31-28 in a 1983 AFC first-round game. The Steelers won the most recent postseason matchup, 35-24 in the divisional round in 2009.

STATS AND STUFF: Pittsburgh has the best defense inside the 10-yard line in the NFL, allowing touchdowns on 50% of opportunities. … Watt has a sack in four straight games and seven of eight this season. With him unavailable, the Steelers are thin after trading Melvin Ingram to Kansas City. Watt has 62 career sacks. Alex Highsmith, Taco Charlton and Derrek Tuszka have combined for 14 1/2. ... Since getting a career-high 130 yards receiving against Denver, Claypool has a total of 92 yards on nine catches in his past three games. ... Pittsburgh’s 16 road wins on Sunday night are tied with Philadelphia for second most. Dallas has 17. ... Cameron Heyward has the most tackles (184) and passes defended (15) by a defensive tackle in the past three seasons. … Pittsburgh's defense is struggling to generate turnovers. The Steelers are 28th in takeaways (eight) this season after ranking second in 2020 (27) and first in 2019 (38) in that category. ... Herbert needs 119 yards passing for 7,000 in his career. He would become the third quarterback to reach the mark in 25 games, joining Patrick Mahomes (21 games) and Kurt Warner. … The Chargers did not have a run of 10-plus yards against the Vikings. … DT Justin Jones had six tackles versus Minnesota. His career high of eight came against the Steelers in 2019. … Los Angeles has not intercepted a pass in its past three games.

FANTASY TIP: Considering the Steelers allowed the Lions to pile up 229 yards on the ground on 5.8 yards per carry without any threat of a passing attack, Chargers RB Austin Ekeler should have his most productive outing since getting 117 yards rushing against Las Vegas in Week 4. If Ekeler, who hasn’t topped 66 yards in any other game, can’t get going as a runner, it will be time to write him off in formats that don’t reward his contributions as a receiver.