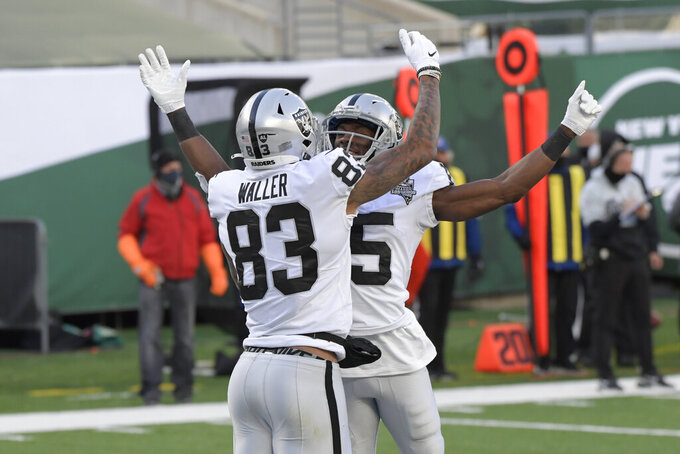 The athletic tight end has proven to be one of the most difficult matchups in the NFL, with the speed to get loose from bigger linebackers and safeties, and the size to outmaneuver smaller cornerbacks.

“Whenever you know you have a guy that it’s man-to-man coverage and you know he can win, you can confidently, against any blitz, take your drop, step up and throw him the ball,” Carr said Wednesday. “The knowledge that before you take that snap, you know you have a guy that can win like that, it makes all the difference in the world. You can play more confidently at the position.”

Waller had 13 catches for 200 yards and two touchdowns Sunday against the Jets, becoming the fourth tight end with at least 200 yards receiving and two TDs in a single game.

Waller racked up 10 of those catches for 115 yards when the Jets blitzed. But he even made contributions when he wasn’t getting open for receptions. Waller stayed in to block to give Carr time to beat an all-out blitz in the closing seconds for the game-winning 46-yard TD pass to Henry Ruggs III.

“The dude is unbelievable,” Carr said. “He gets the credit because the fantasy stat people love him, but especially on stuff like that, he doesn’t get nearly enough credit for what he can do in the run and pass game protection-wise. He’s the complete package. I think he’s the best in the league.”

Waller’s journey to stardom has been an inspiring one. After nearly squandering his career in Baltimore because of a drug addiction, he has developed into one of the most dependable pieces on the Raiders.

Waller was suspended four games in 2016 and all of 2017 because of drug violations. He spent most of 2018 on the Ravens' practice squad before the Raiders plucked him away late that season.

He blossomed into one of the top tight ends in the league last season with 90 catches for 1,145 yards, which helped him earn a long-term deal with the Raiders.

He has built on that this year, ranking second among all tight ends with 77 catches for 742 yards to go along with seven TDs.

“I feel like this season I’ve improved as a player and a person,” Waller said. “Of course, there’s been games where the numbers weren’t what people may have expected. Every week my mindset is whether I have 20 yards or 200, I still come to work the next week with the same mindset each day and stay on top of my habits and let the results take care of themselves.”

Waller has been Carr’s security blanket this season, getting 27.9% of the quarterback's targets, the highest mark of any tight end and fifth-highest in the league.

While many of those passes have been of the short variety, contributing to Waller’s rather pedestrian 8.5 yards per catch over the first 12 weeks, he was able to deliver some big plays against the Jets.

“We’re looking to get Waller the ball as many times as possible because he’s a great player,” coach Jon Gruden said. “The opportunity presented itself. They blitzed 40 times and a lot of those blitz coverages involve man-to-man coverage, so you try to go to your top dog and that’s what we did on several of those occasions.”

NOTES: The Raiders signed CB Daryl Worley, who spent the past two seasons with the team before stints in Dallas and Buffalo this year. Worley likely won’t be able to play this week. ... RB Josh Jacobs (ankle), CB Damon Arnette (concussion, neck) and S Jeff Heath (concussion) all missed practice with injuries. ... S Johnathan Abram was limited after missing last week with a knee injury. ... RT Trent Brown was a full participant as he tries to return from the COVID-19 list.