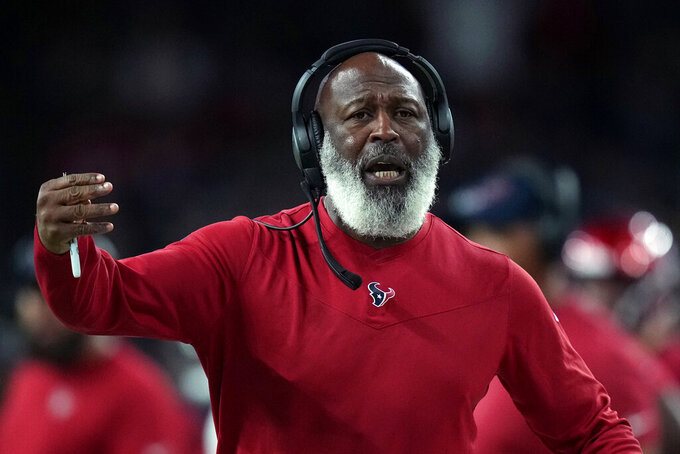 Houston Texans head coach Lovie Smith calls out from the sideline in the first half of an NFL football game against the Philadelphia Eagles in Houston, Thursday, Nov. 3, 2022. (AP Photo/Eric Christian Smith)

There has already been two coaching changes halfway through the NFL season with Indianapolis firing Frank Reich this week four weeks after Carolina did the same to Matt Rhule.

Based on recent history there likely will be more.

The NFL had a record-tying 10 coaching changes last offseason and three-quarters of the teams have changed head coaches at least once in the past five years.

Here's a look at some coaches who figure to be on the hot seat if things don't turn around in the second half of the season and some assistants who could be in line for head coaching jobs.

ON THE HOT SEAT

Nathaniel Hackett, Denver. Hackett seemed to be in peril ever since he botched the end-of-game scenario in his debut loss at Seattle. With Hackett's offense struggling with new high-priced quarterback Russell Wilson and new ownership in town, Hackett could one and done in his first head coaching job unless things change.

Ron Rivera, Washington. Rivera led Washington to the playoffs in his first season in 2020 with a 7-9 record, but that has been the highlight of his tenure. A recent three-game winning streak might have helped Rivera's cause, but the inability to find a quarterback and the potential of a new owner in Washington might lead to a clean slate for the Commanders in 2023.

Dan Campbell, Detroit. Campbell brings big energy to the Lions and is well liked, but he has a 5-19-1 record (.220) that is worse than the .314 winning percentage that got his predecessor Matt Patricia fired before the end of his third season. Few coaches have had any success for Detroit with Jim Caldwell the only non-interim coach in the past half-century to have a winning record with the Lions. Detroit fired him after three winning seasons in four years following the 2017 season and has gone 19-52-2 since then.

Kliff Kingsbury, Arizona. The Cardinals gave extensions to Kingsbury, GM Steve Keim and QB Kyler Murray last offseason, but someone may have to pay the price if they don't improve on their 3-6 record. Kingsbury's offense has looked stale and Murray has appeared outwardly frustrated with Kingsbury at times.

Lovie Smith, Houston. Smith has a 1-6-1 record since taking over for David Culley, who lasted just one season. Without some sign of progress in the second half, the Texans could become the first team with back-to-back one-and-done coaches since San Francisco did it in 2015-16 with Jim Tomsula and Chip Kelly.

ON THE WAY UP

DeMeco Ryans, San Francisco defensive coordinator. It has been a rapid rise up the coaching ranks for Ryans, who joined coach Kyle Shanahan's staff as a quality control coach for his first job post retirement as a stand-out linebacker in 2017. He took over as DC in 2021 and has helped oversee one of the league's top units since then, showing an ability to design schemes that make life difficult on offenses as well as motivate his players.

Raheem Morris, Rams defensive coordinator. After a failed stint as head coach in Tampa Bay more than a decade ago, Morris could be in line to get another chance. He has spent years as an assistant, working on offense, defense and as an interim head coach in Atlanta in 2020. He has done his best work with the Rams the past two years, helping them win a Super Bowl last season.

Shane Steichen, Eagles offensive coordinator. Few coaches have had as much success in recent years as Steichen. He helped Justin Herbert have a stellar rookie campaign for the Chargers in 2020 and then moved onto Philadelphia, where he has helped develop Jalen Hurts into one of the top young QBs for the undefeated Eagles. When coach Nick Sirianni handed over play-calling duties to Steichen midway through last season, the Eagles offense took off.

Dan Quinn, Dallas defensive coordinator. Quinn's first stint as a head coach featured a run to the Super Bowl in Atlanta in 2016 and a 43-42 record in five-plus seasons with the Falcons. Quinn got his first shot based on his success running the Seattle style defense as coordinator for the Seahawks when they won the Super Bowl in the 2013 season. He has shown more flexibility in his two seasons with the Cowboys, which could make him an even stronger candidate this time around.

Eric Bieniemy, Chiefs offensive coordinator. Bieniemy has been viewed as one of the top candidates for years, but hasn't gotten the nod yet despite his role in helping Andy Reid run one of the top offenses in Kansas City. Maybe the success the Chiefs are having this season after trading Tyreek Hill will help Bieniemy finally get a head coaching job.