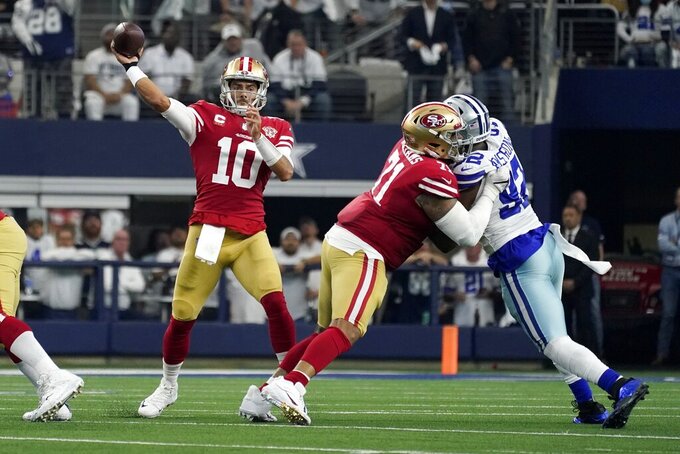 Williams got hurt in the second half of last week's win at Green Bay but remained in the game. Coach Kyle Shanahan would not disclose whether Williams' injury was the more severe high ankle injury or a milder low ankle injury and said the decision on whether he would play against the Rams won't be made until Sunday.

Williams was in a similar situation three weeks ago with an elbow injury and was scratched on game day.

“It’s going to be like it was three weeks ago,” Shanahan said Friday. “I feel the same way as I did at the beginning of the week. He came out for walk-through today and Trent’s adamant that he’s going. He was last time, too. I believe Trent when he says that. He’s going to do everything he can to play. I will be surprised if he doesn’t, but I was surprised last time. I was also surprised he was able to finish the game versus Green Bay.

“So hopefully his mindset will be how his body reacts on Sunday. We know it’ll help us a lot, but if not, we’ll deal with it.”

Williams is coming off a dominant regular season when he shined as both Jimmy Garoppolo's blind-side protector and the driving force in San Francisco's running game.

The Niners survived his absence in a Week 18 win against the Rams when he couldn't play with the elbow injury. Colton McKivitz stepped in for Williams and fared well against Los Angeles' imposing front as San Francisco won 27-24 in overtime.

“The biggest thing is he stepped in for as good as a player that exists and we weren’t talking about him,” offensive coordinator Mike McDaniel said. “We weren’t worried about him all game. As an offensive lineman, it’s kind of like referees at times, no news is good news. ... If you want to have a heart attack, go line up against all their pass rushers and, oh yeah, do it for the first time that you’re playing all year. That’s a tough task.”

But if the Niners have to go without Williams that would be a big loss because of everything he does for the offense.

He even had a rare viral moment for an offensive lineman last week when he lined up as a tight end on a short-yardage play, went in motion and flattened two defenders to help covert a first down.

Shanahan said that's a wrinkle to an old play that the Niners added recently, joking that he “can’t believe it’s legal” and it's scary to watch a lineman as powerful as Williams get a running start heading into his block.

“I could hear the footsteps in Lambeau,” said tight end George Kittle, who added he was a beat slow getting off at the snap. “The next thing I know I’m getting a knife from the front side and then Trent Williams is blowing through that D gap. Next thing I know, I’m on the ground with 600 pounds on top of me. So yes, it’s a little frightening, but it is what it is, and it was a first down. So I’m going to accept it. Let’s just hand him off the ball one of these times, because I think I don’t know if anyone’s going to try to tackle him. It’s a fun play though.”

NOTES: The only other 49ers player with an injury designation is backup RB Jeff Wilson Jr., who is also questionable with an ankle injury. ... The Niners left for Los Angeles on Friday night instead of Saturday like they would typically do on a short trip. Shanahan said some of the players asked to do that after the team had success the past two weeks leaving two days before road wins at Dallas and Green Bay.