49ers count on bigger impact in game 2 with McCaffrey 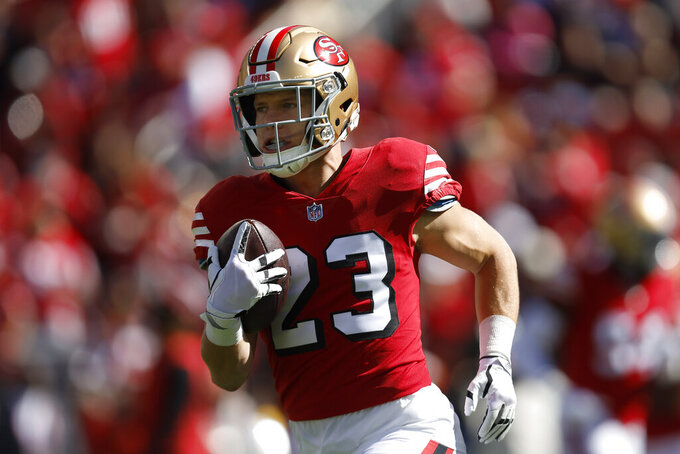 SANTA CLARA, Calif. (AP) — For his debut with the San Francisco 49ers, Christian McCaffrey just wanted to make sure he knew his limited plays well enough to line up in the correct spot and run them properly.

McCaffrey will be a much bigger part of the game plan this week now that he has a full week to learn the offense and prepare for a key game against the NFC rival Los Angeles Rams.

“When you have someone like Christian, it’s always a lot more fun,” coach Kyle Shanahan said about putting together a game plan for the first time with his new star.

McCaffrey practiced for the first time with the 49ers on Wednesday. He was acquired late last week in a trade from Carolina and only got on the practice field to meet his new teammates at the end of Friday's session.

His presence has taken on added importance with versatile receiver Deebo Samuel missing practice Wednesday with a hamstring injury. Shanahan said Samuel has made progress but his status for the game Sunday remains in question.

But if Samuel can't go, McCaffrey will be much more involved than he was last week when he had a 48-hour crash course on the offense and knew about 20 plays he could run against Kansas City.

When McCaffrey was on the trading block last week, it seemed likely he would be playing in this 49ers-Rams game but it was uncertain which uniform he would be wearing.

The two NFC West rivals were the top bidders for McCaffrey, with the Niners winning the sweepstakes by sending Carolina draft picks in the second, third and fourth rounds in 2023 and a fifth-rounder in 2024.

Now they hope the move pays off to spark an offense that is 20th in the league in scoring and has scored more than 24 points just twice in seven games.

“He plays our style, our offensive style — yards after catch — and really hits it when he’s running the ball,” defensive end Nick Bosa said. “Kyle showed a few plays of him in the team meeting today and he looks like he’s part of our team.”

NOTES: CB Jason Verrett (knee) was activated from the physically unable to perform list and was limited at practice. Shanahan said he could make his 2022 debut this week. ... DL Arik Armstead (foot, ankle), DL Samson Ebukam (Achilles), LB Dre Greenlaw (calf), WR Jauan Jennings (hamstring), FB Kyle Juszczyk (finger) and T Trent Williams (rest) joined Samuel on the list of players not practicing. ... RB Tevin Coleman was signed back to the practice squad a day after being cut from the active roster.