49ers once again find themselves in midseason hole 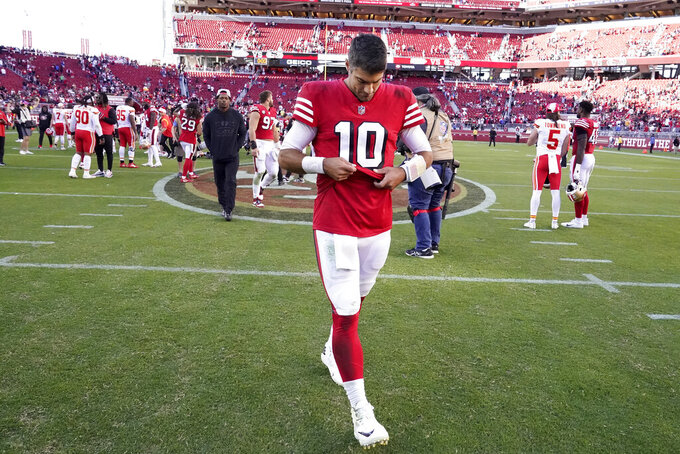 SANTA CLARA, Calif. (AP) — The issues are different but the predicament is similar for the San Francisco 49ers, who once again find themselves scuffling along near the midpoint of the season searching for a consistent winning formula.

Now after a 44-23 loss to the Kansas City on Sunday in a game when the offense struggled to finish off drives and the defense couldn't get off the field, the Niners hope they can figure out how to flip the script as they did a year ago.

The Niners (3-4) have the same record they did at this point last season. They even fell two games under .500 before going 7-2 in the second half to fuel a run that took them to the NFC title game.

They were hoping to build on that this season, but so far have struggled for consistent play.

The offense is averaging just 20.7 points per game and got only 13 points on five drives inside the Chiefs 30 in the first half on Sunday despite the addition of star running back Christian McCaffrey.

The defense that was supposed to carry the team allowed six TDs in a span of seven drives against Patrick Mahomes and the Chiefs on Sunday.

“It’s frustrating," defensive end Nick Bosa said. "I think we really haven’t played together as a team, offense and defense yet and special teams. So, we need to get clicking on all cylinders if we’re going to make a run this year.”

Garoppolo-George Kittle connection. After a slow start to the season, tight end George Kittle is back to his productive self. He followed up an eight-catch, 83-yard game last week with six catches for a season-high 98 yards and his first TD of the season.

Third-and-long defense. A week after allowing a key third-and-15 conversion on a TD drive in a loss at Atlanta, the Niners once again struggled to get off the field against the Chiefs.

Jerick McKinnon gained 34 yards on a third-and-20 screen pass to set up one TD, Mahomes hit Marquez Valdes-Scantling on a 57-yard pass on third-and-11 to set up another and then found JuJu Smith-Schuster on third-and-6 for a 45-yard score.

After stopping all 17 third downs with 11 or more yards to go the first five games, the Niners have allowed three conversions on five tries the past two weeks.

WR Ray-Ray McCloud. A week after dropping a key deep pass, McCloud made some plays in the passing game for the Niners. He had four catches for 65 yards and an 8-yard TD that was the first touchdown catch of his career.

Offensive line. Tackles Trent Williams and Mike McGlinchey came back from injuries, but the Niners still struggled to protect Garoppolo. They allowed a season-high five sacks with Williams getting beaten by Frank Clark on a fourth-quarter safety that put the game away and McGlinchey getting beaten for two sacks, according to Pro Football Focus.

FB Kyle Juszczyk had surgery after breaking a finger in the game and is expected to miss the game this week. Coach Kyle Shanahan said Juszczyk is expected back after the bye on Nov. 13. ... WR Deebo Samuel (hamstring) and LB Dre Greenlaw (calf) are day to day. ... DT Arik Armstead (foot, ankle) could return this week after missing four of the past five games. ... The Niners must decide by Wednesday whether to activate CB Jason Verrett (knee) from the physically unable to perform list or shut him down for the season.

10.17. Mahomes played eight drives on Sunday and the Chiefs averaged 10.17 yards per play on those drives. San Francisco came into the game allowing a league-low 4.18 yards per play.

The 49ers visit the Los Angeles Rams on Sunday looking to sweep the season series. San Francisco is 2-0 in the NFC West and 1-4 in all other games this season.