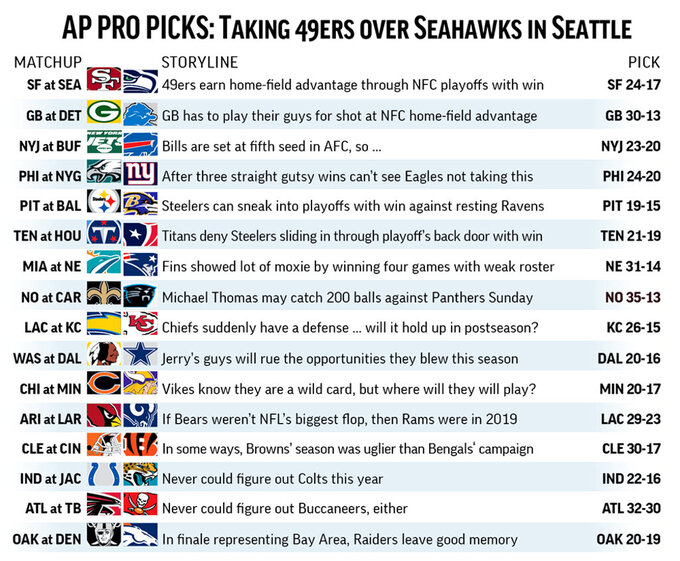 The NFC West will be decided Sunday night in the NFL's final game of the regular season. Too bad only one of the participants has anything close to its full side.

San Francisco (12-3) visits Seattle and the winner takes the division and possibly even more. But the Seahawks are severely undermanned on defense and in the offensive backfield. So much so that they dug into their past to bulk up their running game.

Marshawn Lynch brings Beast Mode back to the Pacific Northwest after the Seahawks' backfield was decimated by injuries.

“What I needed to hear from him is where his heart is. Is he in it and does he want to go for it? Which he totally does," Seattle coach Pete Carroll says. "He's worked to prove that. I don't doubt him one bit about that. He's very sincere about how he presents himself to this game and it's very important to him to be at his best and do well, and he's going to do everything he can to make that happen.”

Lynch last played in Seattle in January 2016. If he is in a modicum of shape, he could contribute as Seattle seeks a better spot in the postseason.

The Niners, meanwhile, will earn home-field advantage throughout the NFC playoffs should they win.

“It’s going to be a 60-minute game,” quarterback Jimmy Garoppolo says. “You have to have your mind ready for that. When you get to these big games, two good football teams, it’s always going to go up until the last whistle, and we’ve had multiple experiences this year like that.”

San Francisco, ranked third in the AP Pro32, is a 3-point choice over No. 7 Seattle.

Week 17 always is a difficult read with several teams likely to sit key players as they prepare for the playoffs. A rule of thumb during the regular season of usually going with the better roster doesn't apply because, well, clubs with the better rosters aren't necessarily playing those guys.

Packers have to play their guys for shot at NFC home-field advantage.

Steelers can sneak into postseason with win against resting Ravens.

Titans deny Steelers sliding in through playoff's back door with their win.

Will Michael Thomas catch 200 passes in 2020 season? Or against Panthers this Sunday?

Chiefs suddenly have a defense. Will it hold up in postseason?

Jerry's guys will rue the opportunities they blew this season.

Vikings know they will be wild card. Where they will play, who knows?

If Bears weren't NFL's biggest flop, then maybe Rams were in 2019.

In some ways, Browns' season was uglier than Bengals' campaign.

Never could figure out Colts this year.

Never could figure out Buccaneers, either.