AAF survivor Matt Simms eager for another shot with Falcons 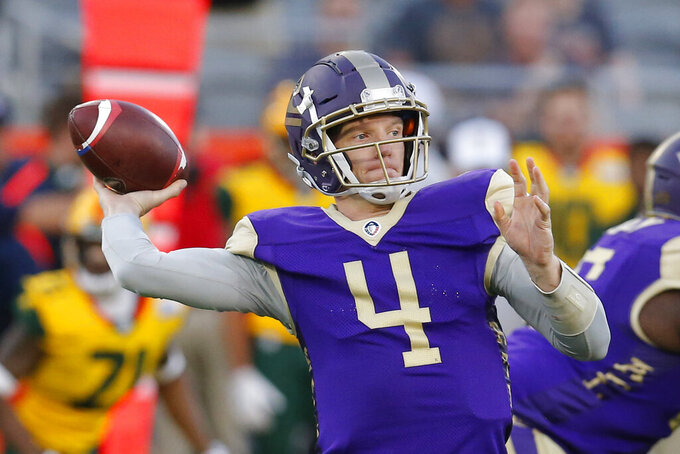 FILE - In this March 3, 2019, file photo, Atlanta Legends quarterback Matt Simms (4) throws down field against the Arizona Hotshots in the first half during an AAF football game, in Phoenix. Simms has been re-signed by the Atlanta Falcons following a toe injury suffered by Kurt Benkert which changed the backup quarterback competition behind Matt Ryan. Simms played for the Atlanta Legends of the now-defunct Alliance of American Football after serving as the Falcons' No. 3 QB last year. (AP Photo/Rick Scuteri, File) 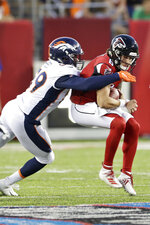 FLOWERY BRANCH, Ga. (AP) — Just when Kurt Benkert may have been on the verge of pushing to be Matt Ryan's top backup this season, Benkert's toe injury has forced the Atlanta Falcons to look elsewhere for preseason depth.

Matt Simms, most recently the starter for the Atlanta Legends of the now-defunct Alliance of American Football, was eager to seize the opportunity.

Simms, 30, was signed on Saturday after Benkert was hurt in Thursday night's Hall of Fame game loss to the Denver Broncos. Benkert has been scheduled for a second opinion on Tuesday to determine the severity of the injury. Coach Dan Quinn said Sunday "it's going to knock him out him for a while."

Matt Schaub remains the favorite to retain the top backup job for the fourth straight year. Schaub is 38 and more depth was needed, if only for the preseason.

Simms, a member of the Falcons' practice squad in 2015 and 2016, last played with the team in 2017, when he was released in injury settlement.

Quinn said Simms' recent experience with the Falcons made him the best choice to provide immediate depth. Quinn believes Simms can play in Thursday night's preseason game at Miami.

"We thought he would be up for the challenge," Quinn said Monday.

Looking for a path back to the NFL, Simms signed with the AAF, the eight-team spring league which folded before completing its first season. It wasn't a pleasant experience for Simms.

"I learned that I'm tough because that AAF situation wasn't the prettiest," Simms said after Monday's practice. "Honestly, I'm just really proud of myself for fighting through it and fighting for what I believe in and just trusting the process, as DQ says. That's really what helped me get through that situation and get to this situation now."

Simms is facing long odds to make the Falcons' roster.

Atlanta carried only two quarterbacks on its active squad last year. Benkert spent the 2018 season on the practice squad.

Still, Simms is happy to be back in the NFL, even without a guarantee he'll be with the team beyond the preseason.

"The whole goal of playing in the AAF was to go back to the NFL," he said. "Whatever that means, I was willing to do it. Fortunately, I survived that league and now I'm back here and I couldn't be happier. Couldn't be more grateful, either."

Simms has been logging extra film work with quarterbacks coach Greg Knapp in an attempt to catch up with changes in terminology and plays since 2017.

Simms, the son of former Giants quarterback Phil Simms and the younger brother of former Tampa Bay quarterback Chris Simms, was one of the last players off the practice fields on Monday. He threw extra passes and jogged to the sideline and back following each completion. The conditioning exercise is another way to prepare for Thursday night's game.

"My opportunity here is I'm getting a lot of good practice reps, a lot of good reps in the games and just taking advantage of those and having fun and cut it loose," Simms said.

Meanwhile, Simms knows his place in a film room packed with quarterbacks named Matt. It is a Matty Thrice reunion.

"We all know now that Matt is Matt Ryan," Simms said. "Schaub is Schauby and I'm Simmsy. But hey, if anyone is coaching Matt, I'm turning and looking, too, because I want to know what he's learning just so I can continue my progress in the offense."