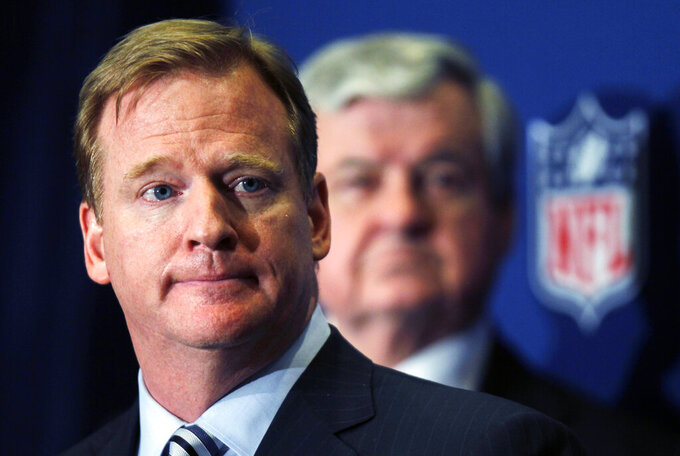 FILE - In this Thursday, July 21, 2011 file photo, NFL Commissioner Roger Goodell announces that NFL owners have agreed to a tentative agreement that would end the lockout, pending player approval in College Park, Ga. The process of building the NFL schedule used to be a painstaking one with executives like Val Pinchbeck spending months slotting the games one by one on his board until there was a final product for the commissioner to approve. Making late tweaks or looking at alternative options with a big game moving from early to late in the season weren't really possible for all the pieces of the complicated jigsaw puzzle to fit.(AP Photo/John Bazemore, File)

The process of building the NFL schedule used to be a painstaking one with executives such as Val Pinchbeck spending months slotting the games one by one on his board until there was a final product for the commissioner to approve.

Making late tweaks or looking at alternative options with a big game moving from early to late in the season weren't really possible for all the pieces of the complicated jigsaw puzzle to fit.

The 272-game schedule the NFL released on Wednesday took a completely different journey to completion with computers from Amazon Web Services negotiating the trillions of possibilities on what day, what time and what network to play each game and officials at the league looking at more than 80,000 of them before making a final choice.

The schedule-making process starts as soon as the previous season ends and the opponents and sites are locked in for all of the games. The league seeks input from teams about requests as well as the five network partners.

The final piece of the puzzle is put in place after the Super Bowl with the champion hosting the Thursday night season opener. Tampa Bay was slotted to host Dallas in that game.

The league tries to whittle down the trillions of possibilities by starting with about 80 “seed” games for prime-time and other premium TV spots such as doubleheader windows and holidays into the schedule.

“If you start from zero, go to 100 and hit the button, we could have every computer on the planet and all the years in our lifetimes and we’d still never find the one,” North said. “We have to break the problem down into more bite-sized chunks.”

The schedule makers operate with a “leader in the clubhouse” mentality with one schedule always in position as a winner until it is supplanted.

Each morning they get new schedules from the cloud computers and see if anyone is worthy of being the new leader and then they also give instructions to the computers by taking away some of the seed games or moving them to different spots to see if that helps eliminate other problems.

The process keeps repeating until the league settles on a final option. While they might look at hundreds of schedules in a day early in the process, by the end they might only get five that all could be worthy of becoming the new leader.

“It’s a constant dance,” North said. “Thank heavens for the amount of hardware we’re able to put our hands on. Back in the old days, if we had six computers running side by side, we thought that was space shuttle technology. And now there’s literally 5,000 soldiers out there scattered throughout the planet, looking on a slightly different branch of the search tree, all trying to find the magical, mythical unicorn one perfect schedule.”

The NFL moved from the manual board from the old days to rooms full of servers that the league had to purchase and configure. Then in 2017, the league contracted with Amazon to use cloud technology to make the schedule, taking advantage of Amazon’s technology which uses predictive analytics to help make a more ideal schedule for TV partners.

The deal allowed the NFL to access more computers at a cheaper cost because Amazon does most of the work during off hours when demand for its cloud service is low.

AWS goes through trillions of possibilities with the league looking at more than 80,000 of them that are considered playable.

“The performance and the cost coming together allows the NFL to basically generate many, many more schedules than any human could ever read,” said David Brown, the vice president of Elastic Compute Cloud at Amazon. “It allows them to really go and find the perfect schedule. The NFL is able to literally consider an infinite number of possible inputs, something that’s just never, ever been possible before.”

The process was a little more complicated at the beginning this year because the schedule makers initially had to plan for both 16- and 17-game seasons.

While the 17th game added countless more possible schedules to the equation, it also provided one factor that made it easier. Typically games are assigned to networks with any game with an AFC team on the road going to CBS and with an NFC team on the road to Fox.

Each network loses some of those games to the prime-time partners, but the NFL tries to keep it equitable for both CBS and Fox. The 16 games added this year are viewed as “free agents” so the NFL could put a premium game such as Dallas at New England in Week 6 on CBS without Fox viewing it as having a game stolen.

Come the new TV deal in 2023, all the games will start off as free agents, making the mathematical equation easier, but also meaning that all the network partners will likely have the same requests for big games.

The requests from teams run in two major categories. There are typically more than 100 dates where teams can’t play at home because of stadium availability or another major event in the city and then there are other types of requests.

Some teams like to play back-to-back games on the opposite coast and spend a practice week on the road. Some hope to play on Thanksgiving night or Christmas this season, others request not to. Warm weather teams want to avoid the cold late in the season and cold weather teams want to stay away from heat and humidity in September.

And all the teams remember every schedule slight from years past and makes sure the NFL knows about them.

“Everybody has very long memories and very specific asks,” North said. “It’s a thankless job trying to thread that needle, knowing full well we’re never going to get there. So the whole exercise here is make the schedule that disappoints all the teams as minimally and as equally as possible.”