Antonio Brown moves closer to return to practice for Raiders 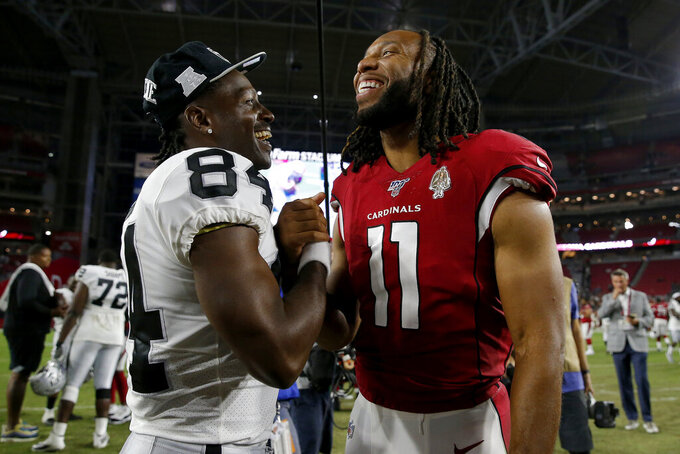 NAPA, Calif. (AP) — Antonio Brown made it through a walkthrough practice for the Oakland Raiders with no issues with his frost-bitten feet and is expected to be a full participant in practice soon for the first time this summer.

Coach Jon Gruden said Saturday that he thinks Brown will be able to get back into practice before the Raiders play their third exhibition game next week in Winnipeg, Manitoba, against the Green Bay Packers.

Brown hasn't taken part in a full practice session all of training camp as he dealt with injuries to his feet suffered in a cryotherapy mishap in France last month and fought with the NFL over the helmet he's allowed to use.

"He did everything with us just now," quarterback Derek Carr said. "The man's recall is unbelievable. He came in and had no mental errors. In this offense, that's not easy to do. Especially whenever you have a day off just even as a player, you come back and you have to stay on Coach Gruden's offense all the time. You can tell Antonio has been studying because he came out and didn't miss a beat."

Brown started training camp on the non-football injury list because of the injuries to his feet. He participated in one warmup and part of one practice before leaving the team briefly to get treatment and deal with a grievance with the NFL over his helmet. He returned to the team this past Tuesday after losing the grievance and began looking for a new helmet. He took part in pregame warmups in Arizona two days later and the walkthrough on Saturday.

Brown is being counted on as a major part of Oakland's offense this season after being acquired in a trade from Pittsburgh back in March. He had 686 catches and 9,145 yards receiving in his final six seasons with the Steelers, the best mark ever for a receiver in a six-year span.

In Brown's absence, the Raiders have gotten good contributions in practice and preseason games with the other receivers on the roster in a positive sign at a position that was a weakness on the team last season.

Tyrell Williams has been a star at practice as the projected starter across from Brown and had a leaping 27-yard grab against the Cardinals in his only brief preseason appearance. Undrafted rookie Keelan Doss is making a case for a roster spot with seven catches for 47 yards and a TD in two exhibition games, while fifth-round rookie slot receiver Hunter Renfrow and free-agent acquisitions J.J. Nelson and Ryan Grant have also flashed.

"It's awesome," Williams said. "I feel like we have guys with speed, guys with size, guys that work in the slot. Everybody has something that's really unique to them and I think everybody can do everything too, so it's just nice to see. Especially in the game, seeing the undrafted guys go out there and make plays because I know how it felt in that same situation when I first came in, so seeing them have success is awesome."

NOTES: The Raiders activated G Denzelle Good (back) from the physically unable to perform list and will work him back into the rotation on the line. Oakland will be without its two projected starting guards to begin the season with Richie Incognito serving a two-game suspension for violating personal conduct rules and Gabe Jackson expected to miss at least the first month with a knee injury. ... The Raiders signed G/C Cameron Hunt, who played three games for Oakland last year and spent time with the team in the offseason program. ... WR Jordan Lasley was waived.