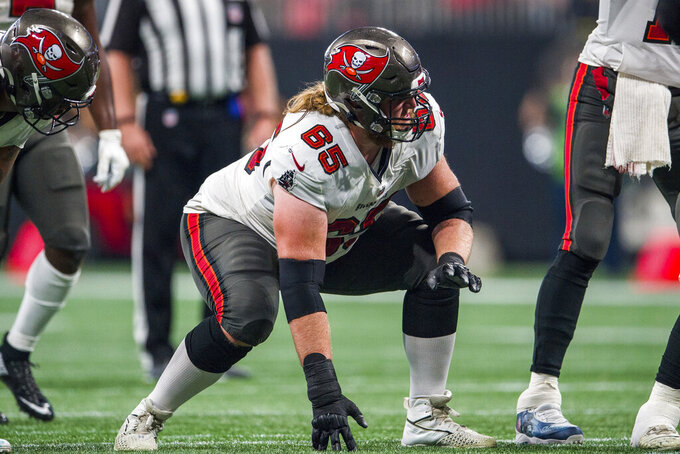 FILE - Tampa Bay Buccaneers guard Alex Cappa (65) lines up during the second half of an NFL football game against the Atlanta Falcons, Sunday, Dec. 5, 2021, in Atlanta. Cappa has agreed to a free agent contract with the Cincinnati Bengals. (AP Photo/Danny Karnik, File)

The Cincinnati Bengals went right to free agency for their biggest area of need, agreeing to contracts with a pair of offensive linemen on Monday.

People with knowledge of the deals confirmed to The Associated Press that the Bengals reached agreements with Tampa Bay Buccaneers guard Alex Cappa and offensive lineman Ted Karras, formerly of the New England Patriots.

The sources spoke on condition of anonymity because the contracts can’t be made official until Wednesday.

The 27-year-old Cappa, who allowed just one sack last season for the Bucs while protecting Tom Brady, agreed to a four-year, $40 million deal. Cappa earned a Super Bowl ring with the Bucs in 2021.

The Bengals had among the worst pass protection units in the NFL, and it was laid bare in the playoffs. Cincinnati allowed a record-setting nine sacks in its playoff game against the Tennessee Titans, and in the Super Bowl, the Los Angeles Rams sacked Joe Burrow a record-tying seven times in beating the Bengals.