AP Was There: OJ Simpson questioned in double killings 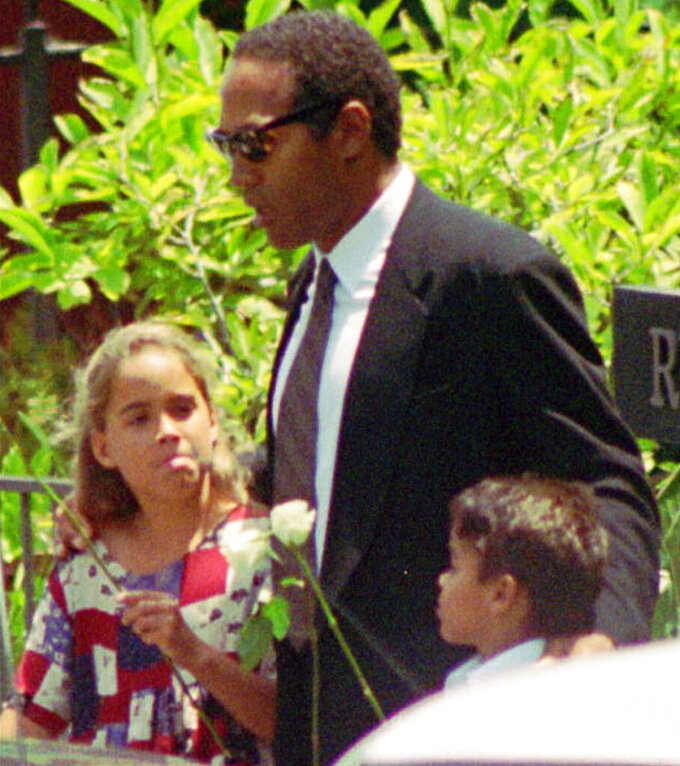 FILE - In this June 16, 1994, file photo, O.J. Simpson, center, daughter Sydney and son Justin arrive at a private funeral for his ex-wife Nicole Brown Simpson in the Brentwood section of Los Angeles. Simpson’s ex-wife, Nicole Brown Simpson, and her friend Ronald Goldman were found stabbed to death outside her LA home. Investigators quickly focused their attention on the former football great, leading to the slow-speed chase that was carried live on national television and, later, the “Trial of the Century,” which ended in Simpson’s acquittal. (AP Photo/Eric Draper, File) 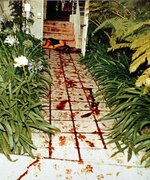 Investigators quickly focused their attention  on the former football great, leading to a slow-speed chase that was carried live on national television and, later, the "Trial of the Century," which ended in Simpson's acquittal.

To mark the anniversary, the AP is reprinting this story about the early days of the investigation. It first appeared June 14, 1994.

LOS ANGELES — O.J. Simpson met with his attorney today amid reports that a bloodied glove was found at his home by police investigating the deaths of his ex-wife and another man.

Simpson has denied involvement in the deaths of Nicole Brown Simpson, 35, and Ronald Lyle Goldman, 25. He was not arrested, but today's Los Angeles Times quoted unidentified police sources as saying the football Hall of Famer was under investigation.

Family and friends streamed to Simpson's Brentwood mansion a day after he was handcuffed briefly and questioned for three hours about the deaths.

"It's difficult enough with the shock that you wife's been murdered, but to hear that you may be accused of it, well, it's awful," attorney Howard Weitzman said after meeting with Simpson.

Weitzman said he knew nothing about the reports of the discovery of bloody gloves. He described Simpson as distraught.

The lawyer said earlier that Simpson "had nothing to do with this tragedy."

A blood-soaked glove was found at Simpson's home, the Times and the Daily News of Los Angeles reported, citing unidentified police sources. The Daily News reported that the glove matched one found near the bodies.

"I know nothing," Simpson said as he got into a patrol car Monday.

Simpson flew to Chicago on business about 11 p.m. Sunday and returned around noon the next day, after police notified him of Mrs. Simpson's death, Weitzman said Monday.

"Mr. Simpson is not being treated as a suspect," Weitzman said. "He had nothing to do with this tragedy."

Police aren't ruling anyone out as a suspect, Cmdr. David Gascon said.

Autopsies were planned for today. Coroner's spokesman Scott Carrier said "sharp-force injuries," which might include stabbing, contributed to the deaths. The Daily News said the victims' throats were slashed.

Goldman was a waiter at the restaurant where Mrs. Simpson dined Sunday, but he didn't serve her, restaurant owner Karim Souki said.

"She had dinner here. She called later to see if we found her glasses and we found them," Souki said. He said Goldman volunteered to return them.

The 5-year-old boy and 7-year-old girl were found sleeping, unharmed, in their mother's condominium. They were turned over to relatives.

The Simpsons were divorced in 1992 but were said to be discussing a reconciliation.

Weitzman said the two were often together on family outings, and both attended their daughter's dance recital Sunday.

Simpson pleaded no contest to wife beating in 1989, paid a $700 fine and served two years' probation. He had been accused of screaming, "I'll kill you!" as he slapped and kicked his wife.

Detective Tom Lange, chief inspector at the site, refused to discuss what investigators found. As he left the house, he carried a pair of white tennis shoes.

Simpson checked into the O'Hare Plaza Hotel on Monday morning and left in a hurry about two hours later, general manager Peter Phillips said. He had made his reservation a few days earlier.

Simpson said he was attending a function for the Hertz car rental company, for which he made a popular series of TV commercials.

The NBC-TV sports commentator has also appeared in several movies, including the three "Naked Gun" comedies. He played for the National Football League's Buffalo Bills, then the San Francisco 49ers. He retired in 1979.