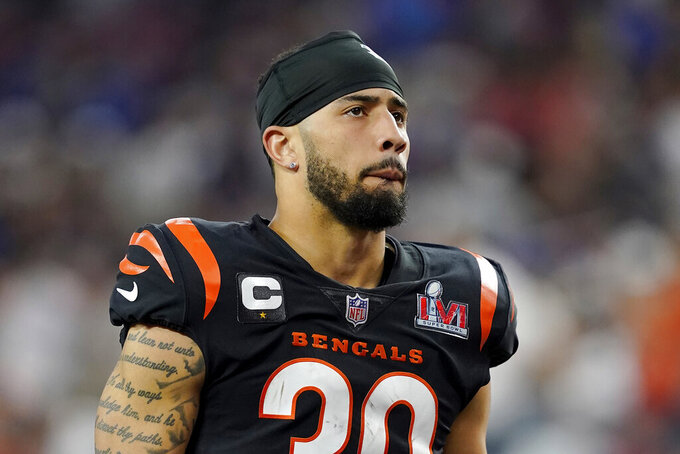 FILE - Cincinnati Bengals free safety Jessie Bates III walks on the field before the second half of the NFL Super Bowl 56 football game against the Los Angeles Rams Sunday, Feb. 13, 2022, in Inglewood, Calif. Bates, who has been in a contract dispute with the team, reported to camp Tuesday, Aug. 23, 2022, and signed a one-year contract with the franchise tag. (AP Photo/Steve Luciano, File)

The four-year veteran was frustrated with efforts to reach a long-term contract agreement with the Bengals. The organization put the franchise tag on him in March, meaning he was bound to the Bengals for the 2022 season before becoming an unrestricted free agent.

Bates skipped organized team workouts and most of training camp, showing up a day before Cincinnati is scheduled to begin two days of practices against the Los Angeles Rams and with the final preseason game on Saturday.

A second-round draft pick in 2018, he has started all of the 63 games he played in four seasons in Cincinnati and became a respected team leader.

Team owner Mike Brown acknowledged before the season that a hinderance in contract talks with Bates was the team's restructuring its finances to be able to re-sign quarterback Joe Burrow and receivers Ja'Marr Chase and Tee Higgins when their rookie contracts expire in the next few years.

Also Tuesday, the Bengals waived quarterback Drew Plitt. The undrafted rookie from Ball State was signed when Burrow was sidelined after an appendectomy. Plitt played in two preseason games.