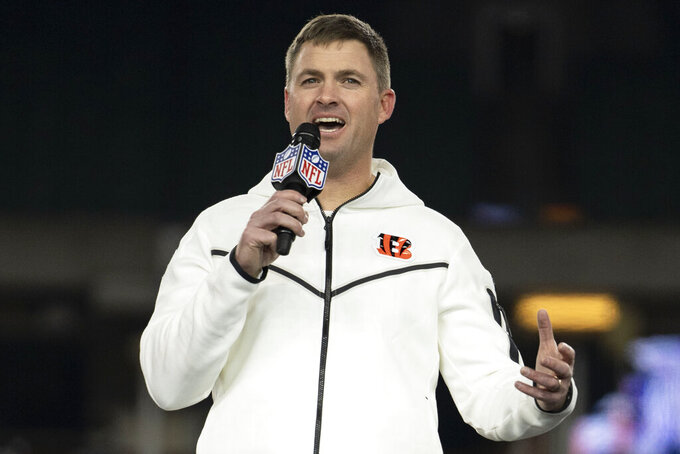 CINCINNATI (AP) — “Who dey” got its own day on Monday.

The Cincinnati Bengals' 40-year-old rally cry rang out over and over during the team’s Paul Brown Stadium NFL Opening Night Fan Rally on Monday night.

The celebration for the team was loud and festive a day before the Bengals travel to Los Angeles and the Super Bowl against the Rams on Sunday.

Fans wanting to be on hand to celebrate in-person the team’s first Super Bowl trip since January 1989 and third in team history needed fewer than five hours to grab the 30,000 free tickets when they became available on Wednesday. Enough showed up to fill the lower bowl.

Six Super Bowl tickets were given away. The big screen showed highlights and interviews.

Former Bengals greats including David Fulcher, Tim Krumrie and Max Montoya, all members of the most-recent Super Bowl team, were interviewed on stage near midfield, where the AFC championship trophy was displayed.

“This team has found a way to win all year, and they will win one more time,” said Ken Anderson, quarterback on Cincinnati’s first Super Bowl team in 1982.

A banner hanging on an upper-deck façade proclaimed. “This one’s for you, Mike,” referring to team president Mike Brown.

Forty-three minutes into the scheduled hour-long rally, Coach Zac Taylor, his assistants and the players took the field wearing matching white warmup outfits. Many shot cellphone videos as they exited the tunnel.

“I promise you we will feed off the energy from wherever you’re watching the game — your living rooms, the local bars,” Taylor said. “Wherever we are, we’ll feel it.”

Quarterback Joe Burrow was the last to be introduced.

“I’m honored to be the quarterback for a great organization and the best fans in the world,” Burrow said.

Tight end C.J. Uzomah ripped off his knee brace and chucked it backward and over his head, inciting cheers before saying a few words. Uzomah was injured early in the AFC championship game against Kansas City and hopes to play on Sunday. He was the last speaker before fireworks lit up the south end of the stadium.

The fans started lining up on Monday more than an hour before the gates opened for the general admission rally with no assigned seating. Among the fans waiting in mid-30 degree temperatures was Dominic Thomas from Covington, Ky., just across the Ohio River from Paul Brown Stadium.

Thomas, 26, wore Bengals gear from head-to-toe, from his orange-and-black camouflage hat with orange and black streamers hanging down from underneath to his orange Burrow jersey, three necklaces with alternating orange-and-black beads, a weathered Burrow towel and a “Who Dey” towel tucked into his black pants and orange-and-black striped tube socks.

Jordan Inman, 21, of Lawrenceburg in southeast Indiana is on a roll. The Bengals are going to the Super Bowl in his first season of having season tickets.

Monday’s event was the next-best thing to having an actual watch party Sunday at the stadium, an idea floated by the administration of stadium owner Hamilton County. The NFL denied the request.