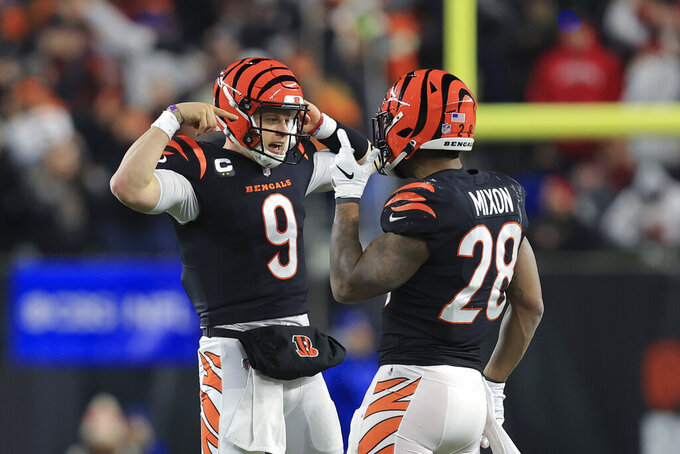 Cincinnati Bengals quarterback Joe Burrow (9) celebrates a touchdown pass to Ja'Marr Chase with Joe Mixon during the second half of an NFL football game against the San Francisco 49ers, Sunday, Dec. 12, 2021, in Cincinnati. (AP Photo/Aaron Doster)

CINCINNATI (AP) — Two weeks ago, the Cincinnati Bengals were coming off two blowout wins that put them right in the middle of a chaotic AFC playoff picture.

There was belief this was a team that could get to the postseason and make an impact.

Then the Bengals became the Bengals again. The inconsistent, slow-starting, mistake-prone Bengals.

Sunday's 26-23 loss to the San Francisco 49ers included a Cincinnati returner fumbling away two punts, a taunting penalty that extended a San Francisco scoring drive, and the Bengals coming back to tie the game in the fourth quarter only to let it slip away in overtime.

Rookie receiver Ja’Marr Chase dropped two passes and then made two spectacular catches for touchdowns late in the game.

The second straight home loss dropped the Bengals to 7-6 and bumped them out of the playoff picture — for now — as they try to manage more injuries to important players.

“It’s just the roller coaster of the season,” cornerback Mike Hilton said, suggesting that some players weren't prepared for the games. “There’s going to be highs and lows. Especially this deep in the season. We’re going to continue to fight for position."

The Bengals tried in vain for three quarters to establish the run Sunday. Quarterback Joe Burrow, who had dislocated the pinky finger on his throwing hand the previous week, led two brilliant drives to force overtime.

The Bengals won the toss in OT, but could only manage Evan McPherson's field goal. Then Jimmy Garoppolo and the 49ers went 75 yards in seven plays for the winning touchdown.

"(We need to) take all these lessons we've learned in these type games and find ways to finish these games off,” coach Zac Taylor said Monday. “It's part of losing in the manner that we have, where we fight hard and we come back and make it a good game. But we've got to find a way to finish off these close games.”

Burrow and the Bengals offense showed they can be potent. After falling into a 24-0 hole at halftime against the Chargers Dec. 5, Cincinnati stormed back to make it 24-22 in the third quarter, only to lose 41-22. The comeback on Sunday erased the 49ers' fourth-quarter lead.

Self-inflicted damage. Returner Darius Phillips fumbled away two straight punts that led to 10 points for San Francisco. Safety Vonn Bell pointed at an opposing player after stopping a critical third-down play and was promptly called for a taunting penalty that gave the 49ers a first down on the Cincinnati 14. Safety Jessie Bates dropped an interception with the score tied at 20 late in regulation.

WR Tee Higgins had a second consecutive 100-yard game, making five catches for 114 yards. Chase made up for two earlier drops with the fourth-quarter touchdowns. His 10 touchdown passes are the most for a Bengals rookie in 31 years. He also topped 1,000 receiving yards.

Phillips, a usually dependable kick returner, cost his team dearly Sunday. Taylor was determined to run Joe Mixon in the first half and establish the running game. It wasn't happening. Mixon had 23 yards on 10 carries in the first half, and finished with 18 carries for 58 yards — a 3.2 yards-per-carry average.

DE Trey Hendrickson, who is among the NFL's sack leaders, left Sunday's game with a back injury and was ruled out. ... RT Riley Reiff left with a left ankle injury in the fourth quarter and didn’t return. Reiff had missed the previous game with an ankle injury. ... CB Chidobe Awuzie said he aggravated a foot injury but expects to play Sunday. Taylor said Monday that all are day to day.

The Bengals still have an outside shot to make the playoffs. A win Sunday coupled with the Baltimore loss to Cleveland would have put them in first place in the AFC North. Instead, they're going to have to start sooner and scrap even harder with four games remaining, two of them against the Ravens and Browns. They play at Denver (7-6) next Sunday.