Broncos OC Shurmur on COVID-19 list, likely out vs Eagles 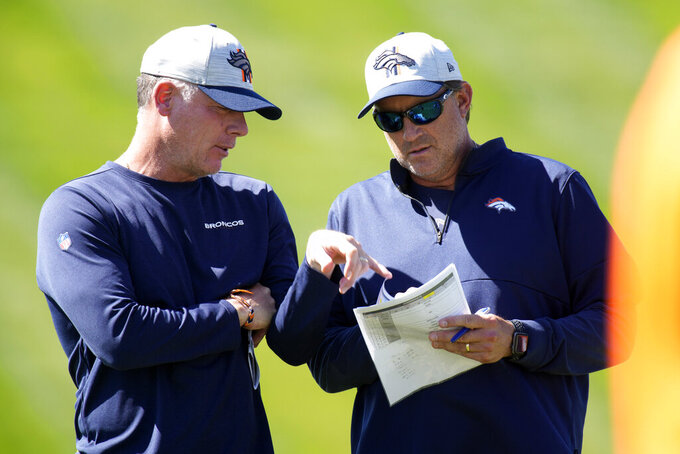 ENGLEWOOD, Colo. (AP) — The Denver Broncos are making backup play-calling plans after offensive coordinator Pat Shurmur tested positive for the coronavirus Friday and went on the reserve/COVID-19 list along with a fourth player infected this week.

A couple of hours after coach Vic Fangio declined to say who would call the plays Sunday against Philadelphia if Shurmur can't, the team confirmed it would be quarterbacks coach Mike Shula, who would also be on the headset with quarterback Teddy Bridgewater.

“It’s a huge concern,” defensive lineman Dre’Mont Jones said of the rash of cases. “I feel like plenty of guys are getting it left and right, getting popped with the COVID card."

The team has stepped up its mitigation measures this week, having everyone wear masks indoors and moving meetings to bigger rooms where players are more spread out.

Jones said talk amongst players is about how to prevent the virus from waylaying the resurgent Broncos, who hope to hit their bye week at 6-4 with a win over the Eagles (3-6) this weekend.

“Not going out to dinner as much. Just trying to avoid outside contact as much as possible. Hanging out with people you know here. Just have to be in a little bubble, you have to," Jones said.

The heightened concern at Broncos headquarters reflects the increasing uneasiness in the larger community, where a surge in COVID-19 cases has parents fearing a return to remote learning and hospital beds are filling up like they did at the start of the pandemic.

“We got into a routine to kind of being normal again,” Jones said, “... and now we’re kind of reverting back to that 2020 season a little bit. But, like I said before, we’ve got to do our part.”

Barring the unlikely scenario of Shurmur testing negative twice 24 hours apart before Sunday’s game, the Broncos will turn to Shula, who used to call plays for Cam Newton with the Carolina Panthers, where he was offensive coordinator from 2013-17.

Schlottman is the fourth player to go on the COVID-19 list this week, starting with backup quarterback Drew Lock, who tested positive for the virus when the team’s plane landed in Dallas last weekend. Lock learned during the flight that someone close to him had the virus and he was isolated when the team landed in Texas, where he tested positive.

The other Denver QB is Brett Rypien. Lock is expected to return next week.

Lock went on the COVID/19 list Monday and he was followed by cornerback Michael Ojemudia and inside linebacker Justin Strnad.

Two more players—tight end Noah Fant and backup guard Netane Muti—are on the exempt list as they return from stints on the reserve/COVID-19 list. They practiced all week.

Fangio said Friday that all the players who have gone on the reserve/COVID-19 list had been vaccinated but had breakthrough infections. The league required all coaches and team staff to get inoculated and strongly encouraged players to do so.

Last year, defensive coordinator Ed Donatell missed several weeks and was hospitalized with a severe case of COVID-19 before vaccinations were available.