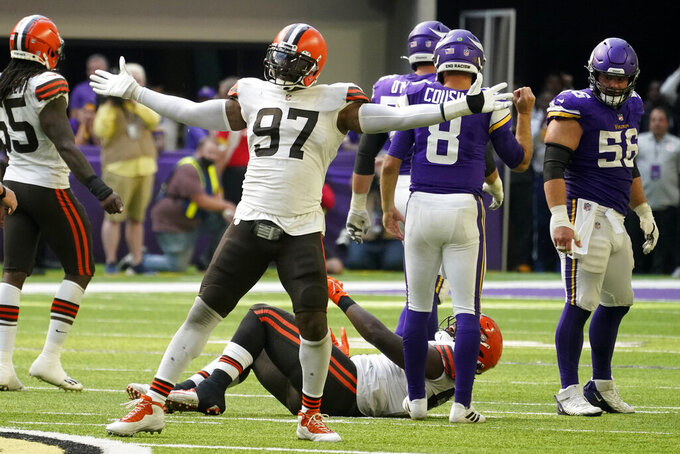 Cleveland Browns defensive tackle Malik Jackson (97) celebrates after making a tackle during the second half of an NFL football game against the Minnesota Vikings, Sunday, Oct. 3, 2021, in Minneapolis. The Browns won 14-7. (AP Photo/Jim Mone)

CLEVELAND (AP) — There figured to be an adjustment period for Cleveland's rebuilt defense, necessary time for so many new players to mesh — a work in progress.

Well, it may be over.

For the second straight week, the Browns' defense dominated during an old-school 14-7 win over the Minnesota Vikings in coach Kevin Stefanski's return to his pro football roots on Sunday.

After allowing a 14-play, 75-yard opening drive, Cleveland's defense clamped down as coordinator Joe Woods dialed up pressure on Vikings quarterback Kirk Cousins, who barely had time to set his feet and throw.

The performance by a defense with new starters from front to back has all but silenced Woods' critics, who were ready to run him out of town after two games. And, it showed the 2021 Browns (3-1) might be a more balanced team than expected.

Cleveland's offense, with its overabundance of playmakers, was supposed to carry the Browns. However, for the past two weeks — and after star Myles Garrett challenged his teammates to do more — it's been the defense shouldering the load.

The Browns have held consecutive opponents to single digits in consecutive games for the first time since 1995. Through four games, Cleveland's defense ranks among the league leaders in points, yards allowed and sacks.

This wasn't supposed to happen. At least not yet. Not with as many as nine new starters. Not with early season injuries.

When the Browns overwhelmed Chicago a week ago, sacking rookie Justin Fields nine times and holding the Bears to just 1 net yard passing and 47 overall, there were some doubters who said let's wait and see how Cleveland's defense does against a proven QB and team.

Cousins couldn't get comfortable after the strong start and the Vikings got just 255 yards — with no trips to the red zone after the first quarter.

Of course, it helped Cleveland's cause when Minnesota star running back Dalvin Cook was forced out in the second half with an ankle injury.

But by then, Cleveland's defensive line, led by the relentless Garett, rejuvenated end Jadeveon Clowney and tackles Malik Jackson and Malik McDowell, had set the tone. They continually collapsed the pocket around Cousins.

“You see guys just mauling people off the ball,” he said. "We're in their backfield and offensive linemen are on the ground. It’s just awesome.”

It wasn't just the front four either.

Rookie linebacker Jeremiah Owusu-Koramoah had another solid game and cornerback Greedy Williams got his first career interception in his first start since 2019 and missing all last season with a nerve injury in his shoulder.

Jackson credited part of the two-week turnaround to Woods holding more walk-throughs and the defensive players meeting on Thursday to go over their assignments.

Whatever it is they're doing, it's working and the Browns suddenly have a defense capable of winning games.

“We are just scratching the surface,” Johnson said.

The NFL-leading running game is humming. Nick Chubb gained 100 yards, Kareem Hunt added 69 and the Browns rolled up 184 on the ground to offset a rough day for quarterback Baker Mayfield, who was wildly inaccurate.

The Browns are averaging 177 yards rushing per game and lead the league with nine TDs.

Mayfield misfired on two potential long balls to Beckham, one that should have been an easy TD after he streaked behind Minnesota's secondary.

In his second game back following reconstructive knee surgery, Beckham had just two catches for 27 yards. He was targeted seven times.

The Vikings figured to pick on Williams, who started in place of injured rookie Greg Newsome II (calf). But the third-year corner was more than up to the task, helping Cleveland's secondary keep Minnesota's trio of Justin Jefferson, Adam Thielen and K.J. Osborn in check.

Mayfield went just 15 of 33 for 155 yards with a 59.5 passer rating. It wasn't just that he missed throws, Mayfield didn't recognize some opportunities to hit wide-open targets.

The fourth-year QB has struggled since hurting his left, non-throwing shoulder while making a tackle in Week 2, but Stefanski doesn't think that's an issue.

Stefanski is awaiting MRI results on starting left tackle Jedrick Wills Jr., who was forced out in the second half with an ankle injury he first got in Week 1. Wills threw his helmet in frustration before being carted to the locker room. ... S Ronnie Harrison cleared concussion protocol and should be OK. He was on the field for just two snaps Sunday. ... Stefanski isn't sure if LB Anthony Walker Jr. will be activated from injured reserve this week after missing three games.

20: The point total allowed by Cleveland's defense over the past 10 quarters in wins over Houston, Chicago and Minnesota.

A second straight road trip, this one to Los Angeles to face the Chargers, who will have a short week after playing Monday night.